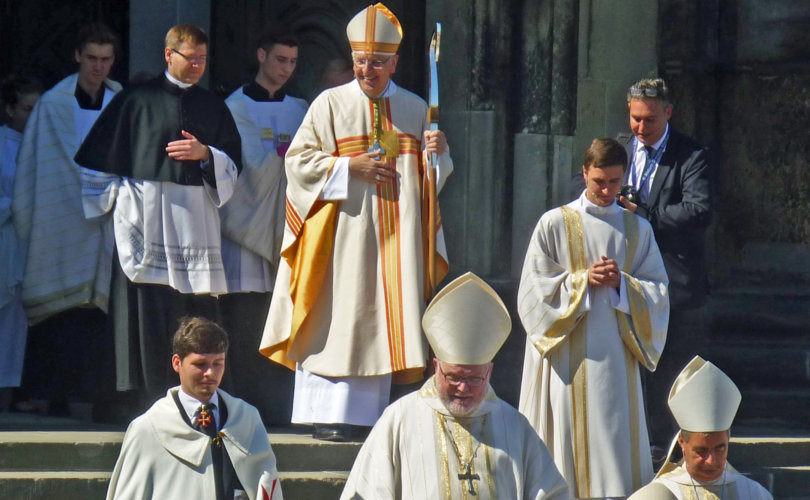 DRESDEN, Germany, October 1, 2020 (LifeSiteNews) – German Bishop Heinrich Timmerevers is calling on the Church to “further develop and strengthen acceptance and tolerance for homosexuals in our communities and in the whole church.”

He also said he supports a blessing of homosexual couples. Asked if he would “welcome” the approval of such a blessing by the Catholic Church, the bishop of Dresden answered with an unequivocal “Yes.”

“Of course you have to think about the form” of the blessing,” he said in a Sept. 28 interview with Katholisch.de. “But basically I would welcome such an opening.”

Timmerevers argued, “The question is: What do I bless? I bless people. And if a person stands before me and asks for a blessing – how can I refuse this blessing? A blessing is the promise of God.”

“A distinction must be made between this and the fact that with such a blessing I do not approve everything that these people do, and think it’s proper,” Timmerevers said. “You have to look at this in a very differentiated way.”

Contrary to the bishop of Dresden’s reasoning, the former prefect of the Congregration for the Doctrine of the Faith, Cardinal Gerhard Müller, had explained in 2018, “If a priest blesses a homosexual couple, then this is an atrocity at a holy site, namely, to approve of something that God does not approve of.”

The Church’s traditional teaching on homosexuality has been under a newly intensified attack among self-professed Catholics in Germany.

In August, the Diocese of Essen released four short videos featuring employees and volunteers of the diocese demanding to change what the Church has taught since the time of Jesus Christ, including on homosexuality and marriage.

A working document prepared for the German bishops’ Synodal Path and made public ahead of the regional meetings in September tried to redefine “the concept of fertility” to include not just “the openness to new life” but also “a social and personal dimension.” Accordingly, “Even same-sex couples and other couples who cannot give birth to a new life have the potential for a fertile life.”

The document also didn’t clarify that according to Catholic teaching, a man can choose only a woman, and vice versa, in marriage, “for the shaping of human sexuality.” Instead, it says, “We see marriage as the preferred but not the only way to live love and sexuality in a relationship.”

An earlier working document had similarly argued that “homosexual acts also realize positive meaningful values, insofar as they are an expression of friendship, reliability, loyalty and support in life.” Homosexuality, it added, should no longer be considered as intrinsically evil. A blessing of homosexual unions was not excluded.

The Catechism of the Catholic Church is clear on homosexuality. “Basing itself on Sacred Scripture, which presents homosexual acts as acts of grave depravity, tradition has always declared that ‘homosexual acts are intrinsically disordered,’” the Church teaches. “They are contrary to the natural law. They close the sexual act to the gift of life. They do not proceed from a genuine affective and sexual complementarity. Under no circumstances can they be approved.”

At the same time, individual homosexual persons “must be accepted with respect, compassion, and sensitivity. Every sign of unjust discrimination in their regard should be avoided. These persons are called to fulfill God’s will in their lives and, if they are Christians, to unite to the sacrifice of the Lord’s Cross the difficulties they may encounter from their condition.”

Bishop Timmerevers admitted in the interview, “I am well aware that the integration of homosexuals and my current efforts to achieve this in our Church are not supported by everyone. I think that many bishops and pastors find this strange, because they perhaps also have no points of contact.”

“The fact that I am initiating it now can also initiate a process of reflection,” he continued. “We have to do this at all levels, in our communities, but also in the Bishops’ Conference. And last but not least, I believe the Catholic Church must reposition herself: How do we deal with same-sex persons in our pastoral work, and how do we evaluate this?”