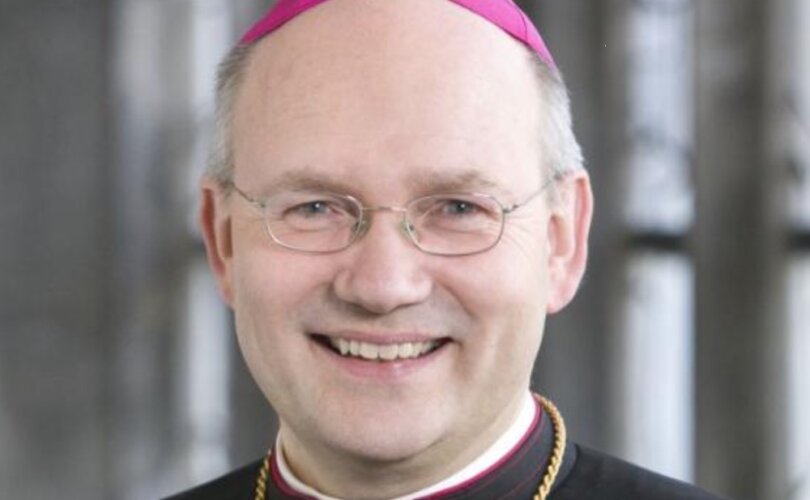 (LifeSiteNews) — A German bishop has declared that sexual diversity is “willed by God and does not violate the Creator’s will,” and that “homosexual lovemaking” is not an aberration but a “variant of human sexuality.”

Helmut Dieser, the bishop of the diocese of Aachen and the head of the Forum for Sexuality and Partnership for the Synodal Way, is known for his heterodox views on sexuality. He made his latest scandalous comments in an interview with the German news outlet Deutsche Welle, published November 8.

The German prelate said that the “current state of Church teaching does not do justice to certain realities in the area of human sexuality.” Dieser called the Church’s teaching on sexuality “too simplified.”

“This applies, for example, to the question of homosexuality,” Dieser continued. “We cannot give homosexual people the answer that their feelings are unnatural and that they must therefore live celibate lives. As a Church, we have to answer these questions in a new way.”

The German prelate claimed that “the science” would show that homosexuality is “not a mishap, not a disease, not an expression of a deficit, nor, by the way, a consequence of original sin.”

“The world is colorful and creation is diverse,” Dieser stated. “And then I may also accept a diversity in the area of sexuality that is willed by God and does not violate the Creator’s will.”

This is not the first time that Dieser expressed his view that homosexuality is “willed by God.” He made the same assertion in an interview in September, in which he also claimed that contraception “strengths the protection of life.”

When asked by the interviewer if God opposes “a man loving a man or a woman loving a woman,” Dieser replied that “same-sex attraction and lovemaking is not an aberration, but a variant of human sexuality.”

Dieser said that he used to think that homosexuality was a “limitation in male or female identity,” that “young people” have changed his mind, and that he learned that his old views are not “theologically binding.”

Furthermore, the German prelate said that the German bishops want to ask Pope Francis to change the catechism on this matter, as the heterodox Synodal Way has called for.

Furthermore, it is impossible for the Church to change its teaching on homosexual acts since they are “intrinsically disordered” as the Catechism states. These acts are therefore always sinful, regardless of circumstances.

Homosexual acts are contrary to natural law, since the natural end of sexual intercourse is the conception of a child.

Moreover, Dieser’s assertions that homosexuality is a “variant of human sexuality” appears to hinge on the claim that people are “born” with homosexual inclinations and that they are therefore “natural.”

As LifeSite’s Pete Baklinski demonstrated in 2021, the assumption that someone can be “born gay” is not backed up by any valid scientific facts: