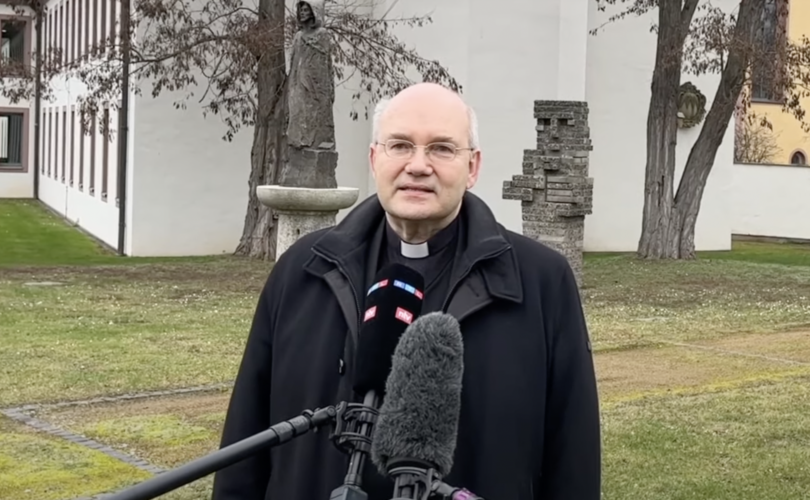 (LifeSiteNews) – German Bishop Helmut Dieser has claimed that homosexuality is “willed by God” and called for allowing contraception, which he said would “strengthen the protection of life.” Moreover, the dissident prelate stated that he does not believe that gender is completely binary. Dieser is the bishop of the German diocese of Aachen and heads the Forum for Sexuality and Partnership for the heterodox Synodal Way.

The prelate made his highly controversial remarks in an interview with the German newspaper Die Zeit, published on September 8.

When asked if God had anything against two men or two women “loving” each other, Dieser replied:

What we find in creation is good. Homosexuality is not a blunder from God, but willed by God in the same measure as the creation itself: He saw that it was good, it says in the creation story.

The Catechism of the Catholic Church states: “Basing itself on Sacred Scripture, which presents homosexual acts as acts of grave depravity, tradition has always declared that ‘homosexual acts are intrinsically disordered.’”

The phrasing of something that is disordered or sinful being “willed by God” was first introduced by Pope Francis in the Abu Dhabi declaration. Part of the document, which was signed in February 2019 by the Pope and a Grand Imam, states that a “pluralism and diversity” of religions is “willed by God.” Francis later gave an informal clarification that he meant the permissive will, not the active will of God when talking about God willing the diversity of religion.

Further, Dieser was asked by the interviewer if his view had changed regarding the sinfulness of homosexuality. The prelate answered:

This statement shows that Dieser believes that not only homosexual attractions are willed by God, but that homosexual acts themselves are not sinful either.

When asked about contraception and whether or not the Church should change its teaching on the matter, Dieser replied:

Why must the Church reject artificial contraceptives? Is it necessary? I think: No. If we recognize – with the Second Vatican Council – that parents themselves decide in responsibility before God how many children they have, then I consider the choice of means to be of secondary importance.

When asked specifically about allowing condoms and birth control pills, Dieser stated that he “would welcome a movement to reevaluate this. It is precisely by recommending contraception that we strengthen the protection of life.”

In reference to a person declaring themselves “non-binary,” Dieser made the following comments:

By now I believe: there is no clear binarity, that all people feel in the same way to be male or female. Even if there is largely binarity, some people say: I am something in between. Or: I want to leave it open. The German legislator has found the term “diverse” for this. We want to adopt that and not differentiate or even define it further.

Answering the question of what changes the Synodal Way will likely make regarding transgender issues, Dieser proclaimed:

For example, the baptismal entry [on the baptismal certificate] should not have to be rigidly male or female only. If the gender at birth is not clear, this should also be allowed to be recorded in the baptismal entry. We want to help people to make their own identity statements in the course of their lives.

RELATED: Cdl. Müller: ‘Nobody can change’ Catholic doctrine that homosexuality is ‘grave sin’

— Article continues below Petition —
PETITION: We won't give any money to liberal bishops who attack the Faith
Show Petition Text
10239 have signed the petition.
Let's get to 12500!
Thank you for signing this petition!
Add your signature:
Show Petition Text

In the course of the interview, Dieser said the commandments of the Church are always subject to interpretation in the light of the current times. As an example of the Church changing its teaching on morality, Dieser cited Pope Francis’s condemnation of the death penalty, which the Church had previously always held as licit.

However, Pope Francis’s arguments against the death penalty come in complete opposition to the writings, teaching, and statements of theologians, saints, and the Magisterium throughout the history of the Church, as scholars – such as Edward Feser and Joseph Bessette, joint authors of By Man Shall His Blood Be Shed: A Catholic Defense of Capital Punishment – have extensively pointed out.

It is even against the words of Scripture, for in the book of Genesis capital punishment is permitted precisely because murder violates man’s dignity as being made in the image of God: “whosoever shall shed man’s blood, his blood shall be shed: for man was made to the image of God.” (Gen 9:6)

Dieser gave this highly controversial interview shortly before the Fourth Synodal Assembly of the Synodal Way, which will take place September 8–10, 2022 in Frankfurt, Germany. The prelate’s comments may very well foreshadow the direction in which the German Synodal Way is heading, considering that he heads the Forum for Sexuality and Partnership for the Synodal Way.