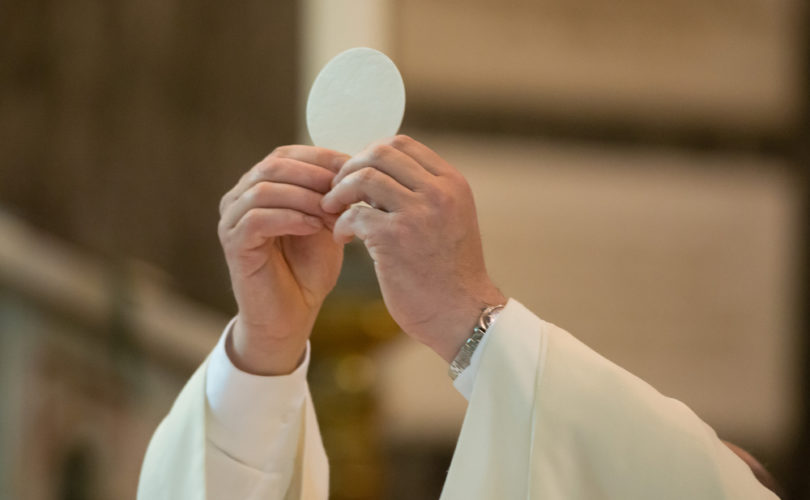 Then, Bishop Gerhard Feige of Magdeburg, Archbishop Stefan Hesse of Hamburg, and Bishop Franz-Josef Bode of Osnabrück all joined Archbishop Becker and announced that they will implement the new German pastoral handout in their respective dioceses.

The Diocese of Paderborn has told the Westfalen-Blatt that this orientation guide as published by the German bishops on June 27 is “valuable.” Archbishop Becker himself explained to his priests, after first presenting his decision on June 27, that he expects “all pastoral caretakers in the Archdiocese of Paderborn to get intensively acquainted with the orientation guide, and that they thus accordingly and responsibly act in their own pastoral care.”

His decision does not mean a “general admission to Communion.” Becker, according to a statement given to Germany’s Catholic News Agency, sees the German bishops’ orientation guide to be a “spiritual aide for the decision of conscience in individual cases of pastoral care” for couples.

The diocese was unable to tell CNA how many couples there are that are potentially candidates for this new approach. When CNA’s Anian Wimmer asked whether there will also be a ruling concerning the other Sacraments and whether, for example, it will be expected that these Protestant spouses of Catholics first make a confession before receiving Holy Communion, the diocese simply said that “in the Archdiocese of Paderborn, the general rules of the law of the Church are being applied.”

In the meantime, Bishop Rudolf Voderholzer, of Regensburg – who was one of the seven German bishops opposing the German bishops’ liberalizing intercommunion handout – gave an interview to CNA, in which he makes it clear that he still expects some clarifications from Rome.

Voderholzer sees that the final resolution of the conflict and especially the May 25 letter sent by Vatican doctrine chief Archbishop Luis Ladaria to Cardinal Reinhard Marx have confirmed the claim of the seven bishops that “the Eucharistic question is a question of the Universal Church and of doctrine.”

“Finally, we assume that the Roman dicasteries will continue to work in this matter,” he adds. When asked whether he will implement in his own diocese the new rules as set out in the German bishops’ intercommunion guide, Bishop Voderholzer points out that the letter sent by Ladaria still “has to be understood as the interpretative frame for the future procedure.”

That letter makes it clear, according to Voderholzer, that “the local bishop is referred back to the practice of the Universal Church.” Furthermore, says the bishop, Ladaria also announced in his letter that there will be “an authentic interpretation of canon 844 [which speaks about giving Holy Communion to non-Catholic Christians in cases of ‘grave necessity’].” Bishop Voderholzer makes it clear that, up to that future explanation and interpretation by Rome, the old rules will continue to exist in Regensburg.

In general, conservative Catholics have been indignant over the recent sudden publication of the German intercommunion guide, which had also been internationally criticized. Regina Einig, writing for the prominent Catholic newspaper Die Tagespost, points out that Cardinal Reinhard Marx had gone himself, behind the backs of his fellow German bishops, to meet with Pope Francis (during the June 11-13 meeting of the Council of Nine Cardinals, of whom Marx is a member).

Einig calls it the “authoritarian decision of the President to go alone and without communication with his fellow bishops, to get the green light from Pope Francis for the publication of the controversial handout,” and she says that such conduct turns the matter into an “ecclesial-political power-game.” The “spirit of fraternity” has, under the leadership of Marx, “turned into a farce,” she adds. “The question about whom Pope Francis wishes to serve with his zig zag course which seems so disoriented, remains open.”

While this new German handout officially maintains the Church's teaching on the connection between Eucharistic and ecclesial unity, “this principle is being, de facto, at the same time omitted in practice,” Einig explains. She speaks here of a “travesty of a synodal Church.” Does “synodality” now mean taking a “separate path [‘Sonderweg’]?” she asks.

Paul Badde, a well-respected German Rome Correspondent for EWTN, also joins the debate and further defends the holiness of the Eucharist. In a passionate way, he declares that, even as a minority, he will remain loyal to the Church's teaching on intercommunion. Thus he says:

Even if I do not be here more papal than the Pope: If the Catholic Church in Germany, for the sake of her rapprochement with the Protestant churches, wants to split once more in such a way, as it is now the case with the German Bishops' Conference, then I remain happily with the minority which follows the guideline of St. Vincent of Lerins (d. 450) to whom we owe the motto: “to take heed in the Catholic Church, with the greatest care, that we hold what has been believed everywhere, always, and by all.” That [St. Vincent of Lerins says] is really and truly Catholic.

Peter Winnemöller, commenting for the Austrian news service Kath.net, says with regard to the sudden papal turn and his giving his “F” signature under a note confirming his permission to publish the pastoral handout (or “guide,” as they now say): “The Pope […] has given his ‘F.’ The rock is shaking!”

Winnemöller then adds: “It is confirmed that he who successfully now has the Pope’s ear at the right moment, also gets the 'F'ree pass under his own note [a reference to the June 12 note allowing the publication of the handout and written by Cardinal Marx and countersigned by Francis with his personal initial ‘F.’].”

“One really can say,” adds the commentator, “that the Pope is awfully wavering when it comes to coherent action.”

Winnemöller points out that Cardinal Luis Ladaria, the Prefect of the Congregation for the Doctrine of the Faith, has been deeply humiliated by Pope Francis and Cardinal Marx with their sudden June 12 decision to publish the German controversial intercommunion handout.

“The cardinal from Munich won his game,” the author says, but it seems few are concerned “that the Pope at the same time put one [of] his own high-ranking curial members out into the pouring Roman monsoon rain.”

“The Pope anyway considers the Curia as a pestilence, so what does it matter,” Winnemöller continues. “Had Ladaria a Westphalian personality, he would take his newly received red hat and throw it before his [the Pope’s] feet and seek a nice country parish.” As the author explains, “the Prefect of the Congregation for the Faith has been gravely damaged. Only a few days ago, he went before the press and explained with much substance and comprehensibility his [own earlier] decision to stop the publication of the handout.”

Another German source, Guido Horst of Die Tagespost, published a June 6 report that his sources at the Congregation for the Faith made it clear that they wished a stricter reading of can. 844 with regard to Communion for non-Catholic Christians in emergency situations, thus excluding Protestant spouses of Catholics as an option. Horst was confident, before the recent papal turn, that the CDF would help implement a more conservative line with regard to this question, and he wrote passages presenting the unofficial position of the CDF as gathered from his sources, a position which was to be negated only a few days later.