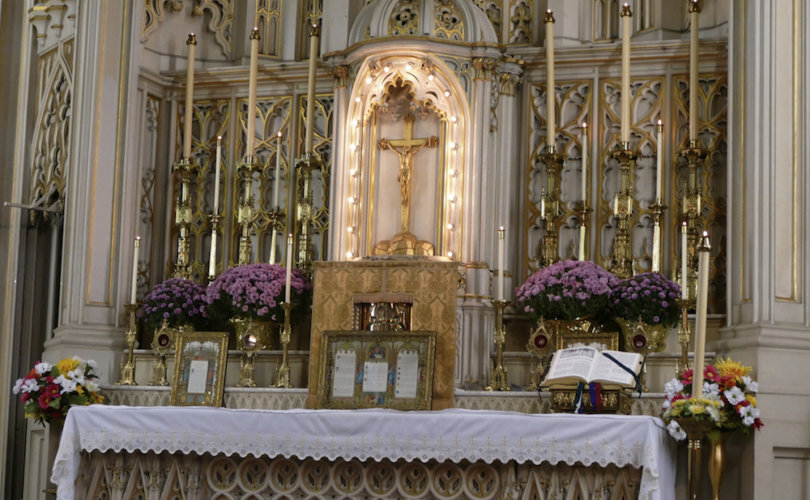 The German bishops issued guidelines for marriages in the Traditional Roman Rite, according to Gloria TV. The guidelines were reported Tuesday in katholisch.de.

Standing out among the guidelines is this statement, “There is no provision made for granting power to celebrate marriages to priests belonging to the Society of Saint Pius X.”

Their guidelines recommend that a diocesan priest or a delegate of the local diocese should marry the SSPX faithful.

But forbidding marriages by the SSPX contradicts Pope Francis’ approval in March granting Society priests faculties via the Congregation for the Doctrine of the Faith (CDF).

As of the March authorization, a local bishop may give a diocesan priest permission to act as the Church's official witness at an SSPX wedding. In cases where this is not possible, an SSPX priest can witness the wedding.

The permission coincides with Pope Francis granting SSPX priests faculties to hear Confession, which was given during the Year of Mercy and left in place when the Jubilee Year ended.

SSPX priests are validly but illicitly ordained. Therefore, they are Catholic priests but serving without the full permission of the local bishop.

Despite the prevalent assumption that the SSPX is in schism, its canonical status is irregular and not that of excommunication.

According to the Society website, it seeks to draw souls closer to Christ through the Holy Sacrifice of the Mass, along with its preaching, schools, seminaries and its other houses of religious formation.

The SSPX has always recognized the pope as head of the Church.

Confusion, disagreement and misunderstanding between Rome and the Society regarding its purpose led to a breakdown in communication in the mid-1970s, leaving the Society’s status in jeopardy.

The Society’s celebration of Mass solely in the Tridentine Rite, along with the issues of ecumenism and collegiality, have been at the center of issues relating to the Society’s canonical status since.

Advancing in age and with negotiations stalled for an extended period of time, Archbishop Lefevbre consecrated four bishops in 1988 to preserve the Society and its carrying on the Tridentine Mass. Doing so without the permission of Pope St. John Paul II resulted in the archbishop being excommunicated.

In 2009, 18 years after the archbishop’s death in 1991, Pope Benedict XVI lifted the excommunication of the four surviving bishops the archbishop had consecrated, with the hope the Society’s members would return to full communion with Rome.

Overtures to bring the Society in full communion with Rome have continued under Pope Francis.

The German bishops' latest act follows a lengthy series in which the German Bishop’s Conference or various individual bishops have exerted separation from Church hierarchy in Rome, or from the Church’s teaching on marriage and other issues.

The German bishops formalized their dissent from the Church's teaching doctrine on Communion, penance, and marriage with a formal statement in February.