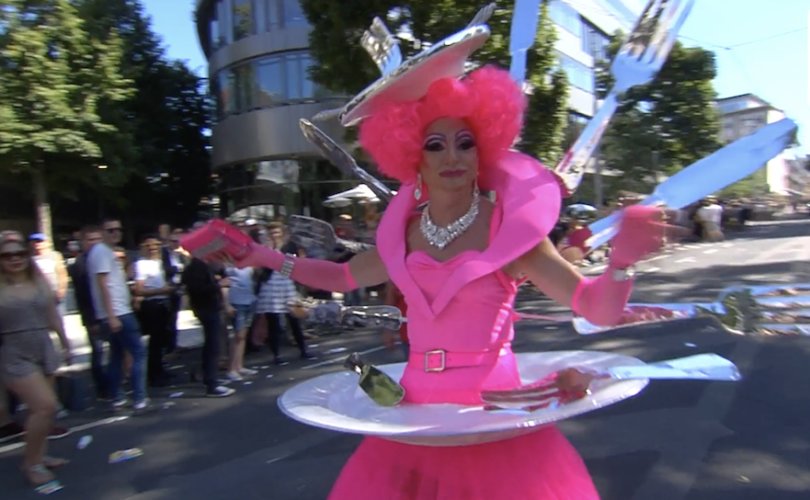 A participant in the Christopher Street Day Paradewww.csd-stuttgart.de screenshot

The Stuttgart Catholic youth group Katholische junge Gemeinde (KjG – Catholic Young Parish) brought along pro-LGBT signs, quoting Pope Francis’ reported words from May to the abuse victim and homosexual Juan Carlos Cruz: “God made you like that and he loves you like that and I do not care. The Pope loves you as you are, you have to be happy with who you are. You should not think about what others think about you.” Another sign displayed by the youth group stated, “Jesus had…two fathers.”

Approximately 70 to 100 members of the KjG participated at the Christopher Street Day Parade in Stuttgart on July 28. The organizers subsequently gave them an award for taking part, citing the youth group’s special contribution to “diversity, acceptance, and equality.”

The KjG has 3,000 members and is part of the Diocese of Rottenburg-Stuttgart, which was headed by Cardinal Walter Kasper, a close collaborator of Pope Francis, from 1989 to 1999.

Miriam Lay, a member of the diocesan leadership of the KjG, told the German bishops’ website Katholisch.de, “God loves everybody independent of one's sex or sexual orientation.”

“Many only know the conservative position of the Church,” she explained. “We wish to change that.” The Church should show that everybody is invited and that people “should not be afraid of an outing,” she said.

Peter Winnemöller, a Catholic journalist writing for the Austrian website Kath.net, expressed regret that the bishop of Stuttgart has not yet intervened in this matter.

“It is a shame for the responsible bishop,” Winnemöller wrote, “if he has not yet responded and possibly now, out of cowardice in the face of the mainstream opinion, deprives the young of the change of conversion and orientation along the truth.”

Winnemöller also referred back to a recent July 28 statement by Bishop Athanasius Schneider of Kazakhstan in which he says that “there is a widespread situation of silence, passivity and fear among those in the Church who should unambiguously address this situation and protect the life of the Church from the infiltration of the poison of the ideology of homosexuality and gender, and proclaim the truth of God’s creation and of His holy commandments.”

For Bishop Schneider, the “so-called 'gay pride' demonstrations unmistakably resemble the propaganda marches of various totalitarian political regimes of the past.” The prelate stated that “gender ideology, or the ideology of homosexuality, represents a revolt against the creative work of God,” and he sees the possibility that, in the near future, Catholics might be further persecuted – similar to the early Christians – for holding that truth taught by God.