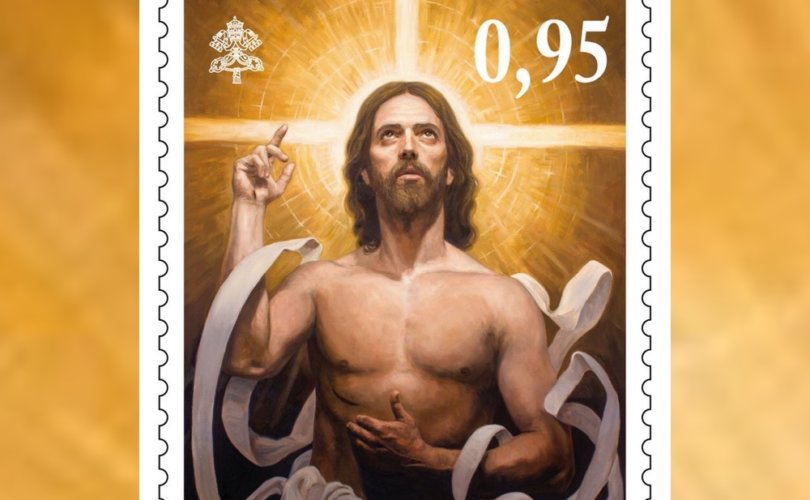 The anonymous author of the short review said the image of Jesus would make women’s hearts race, adding that the youthful-looking Savior cast in the shade one German prelate known for his handsome looks.

Gänswein, 61 is the Prefect of the Papal Household and private secretary to Pope Emeritus Benedict XVI. During Benedict’s pontificate, Gänswein’s handsome appearance was once often commented upon by mainstream media.

The #Vatican has released its stamp for Easter 2018, by Spanish artist Raul Berzosa. The German bishops’ conference news site Katholisch describes it as a “gym-Jesus with muscle-packed arms and toned upper body” causing “women’s hearts to beat faster” https://t.co/SbWjgWcupX pic.twitter.com/z0Hbtu869l

The image on the stamp is the work of Spanish painter Raúl Berzosa Fernandez. The artist, who is well known for his religious themes, also contributed to a 2016 Vatican stamp commemorating Pope Francis’ 80th birthday.

“The Argentine pope, however, is much less muscular than the resurrected Jesus,” said the German bishops’ website.

Anthropologists have posited that Jesus of Nazareth was physically muscular in His thirties, thanks to his trade as a carpenter.

The post follows upon a new paradigm in theology of sexuality and marriage advanced by, but not confined to, the German bishops.