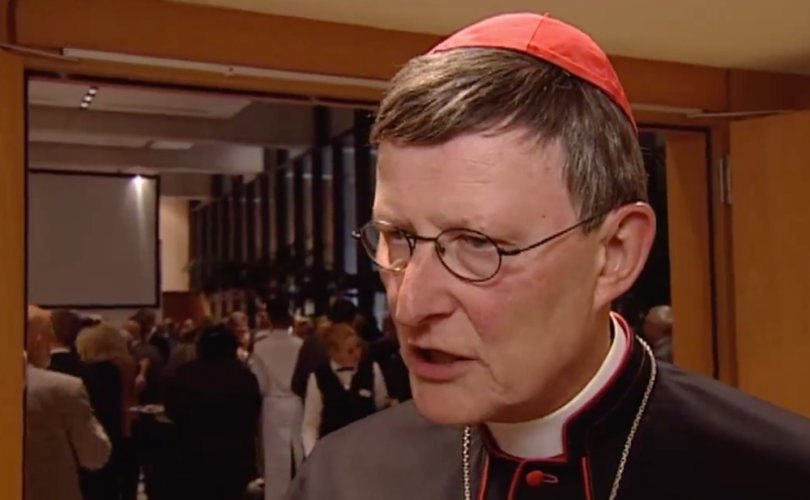 COLOGNE, Germany, May 28, 2021 (LifeSiteNews) — The archbishop of Cologne has appointed a woman as head of priestly formation, making her the first female to take the important role within the archdiocese, and breaking with the tradition of having such a position fulfilled by ordained men exclusively.

Cardinal Rainer Maria Woelki, who heads the Archdiocese of Cologne, announced the unprecedented decision in a press release Wednesday.

“The hiring of Dr. Breuckmann-Giertz is another important signal of a necessary, distinctive contribution that women are making in a modern, changed training for priests and deacons,” Woelki said. “With her competence and commitment at the interfaces of education and theology, Dr. Breuckmann-Giertz brings with her the best prerequisites for this.”

Woelki used the opportunity to note his longstanding desire to introduce women into historically male roles in church governance: “The promotion of women in various professions in the Church, explicitly also at the leadership level, has long been a great concern of mine. The elaborated votes of our Pastoral Way Forward and the positive suggestions of the ‘Synodal Path’ encourage me on this way.”

Though the cardinal has voiced his support for female leadership within the Church in the past, suggesting that some women should “become the superiors of priests,” and now installing a woman as head of priestly formation in his diocese, he has stood in opposition to calls by some German bishops for the creation of a female diaconate or, indeed, priesthood.

“There is a clear, conclusive no from Pope John Paul II,” Woelki said regarding the ordination of women in a 2020 interview with German newspaper Süddeutsche Zeitung. He added that even “Pope Francis has just confirmed again” the perennial doctrine of a male clergy, in reference to the Pope’s post-synodal apostolic exhortation Querida Amazonia.

Carmen Breuckmann-Giertz has a doctorate in theology from the University of Bonn, and before being appointed to the diocesan office was serving as Director of Studies at a Catholic secondary school.

“I look forward with respect and drive to the challenges and opportunities that await me in my new position.” Breuckmann-Giertz said in response to her appointment. “I look forward to working with those responsible in the seminary, the Collegium Albertinum, and the Institute of Deacons. Above all, I look forward to getting to know the candidates who are preparing for a clerical profession.”

The theologian told Trauer Teilen, a blog dedicated to grief counseling and ethical end-of-life care, that she has rejected “[t]he old doctrine of the separation of body and soul,” when asked for her beliefs about death in a 2020 interview.

The perennial doctrine of the Catholic Church, however, has traditionally taught that bodily death necessarily involves the separation of the body from the soul, expressly contradicting Breuckmann-Giertz’s understanding. The Catechism of the Catholic Church (CCC 997) explicitly describes death as “the separation of the soul from the body,” explaining that the “human body decays and the soul goes to meet God.”

Again, in CCC 1016, the Church teaches, “By death the soul is separated from the body.”

Breuckmann-Giertz’s appointment fulfils part of an “8-point plan for improved protection against sexual violence” in the archdiocese. Along with archdiocesan Vicar General Dr. Markus Hoffman, Cardinal Woelki established the plan in response to an investigation into “the handling of sexual violence in the Archdiocese of Cologne.”

Hoffman announced he was pleased “that with the appointment of Dr. Breuckmann-Giertz we can promptly implement another announcement of our plan.” “Further decisions will follow.” The archdiocese offered no explanation for why a female head of priestly formation addresses historic problems of sexual abuse mishandling.

Despite paving the way for female leaders in priestly formation, Woelki stands as one of few voices of criticism among the German episcopate against the now-infamous Synodal Path.

The Synodal Path was established by the German Bishops’ Conference in 2019 and is expected to convene periodically until 2022. The process involves discussions on four major aspects of the Church’s structure and teaching: ecclesiastical hierarchy and authority; the role of women in the Church; the role of the priest; and sexual ethics.

Woelki blasted some of the stated goals, noting particularly the movement towards “the abolition of obligatory celibacy, women deacons, and the reduction of Catholic sexual morality to the sentence: Between adults, voluntary sexual relations of whatever kind are not to be objected to.”

Following the first synodal meeting in early 2020, Woelki commented that his fears about the unorthodox direction of the process had played out in reality. “[M]any arguments put forward at the first synodal assembly are incompatible with the faith and teaching of the universal Church,” the prelate said at the time.

Woelki added that “due to the way this event was conceived and constituted, a Protestant church parliament is being implemented here … My impression is that much of what belongs to the theological body of knowledge is no longer shared by many of us here … The view according to the tradition of the Church no longer plays a major role.”