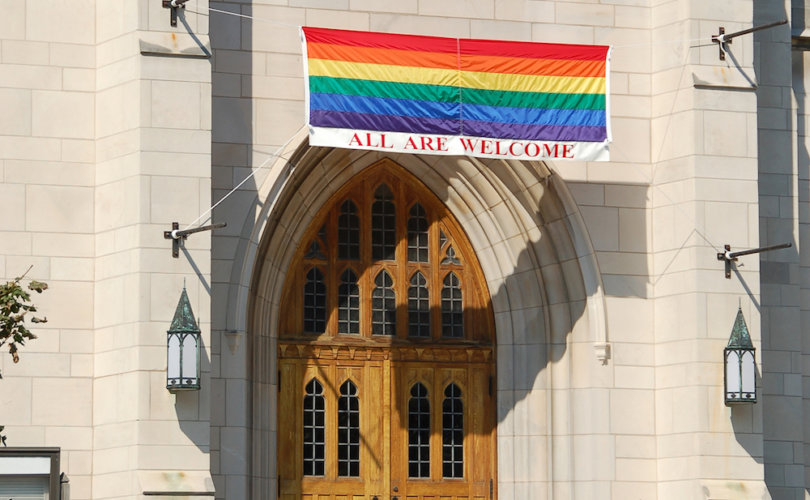 May 24, 2016 (LifeSiteNews) – Homosexuals, male and female, are scheduled to be the “star guests” of the 2016 edition of a two-yearly event organized by the Central Committee of German Catholics (ZdK), the “Katholikentag” (or “Catholic’s Day”) which is to take place from May 25-29 in Leipzig. They will be “massively” present at events, round tables and even during church services, giving witness to the revolutionary power of the Central Committee of German Catholics, a lay organization that has close links with the Bishops’ Conference and which promotes a more “moderate” Catholic teaching on marriage, family and sexuality.

The event will be hosted by the Diocese of Dresden-Meissen and a number of German prelates will take part, according to Vaticanist Marco Tosatti, including Cardinal Reinhard Marx, president of the German Bishops’ Conference, and Archbishop Heiner Koch of Berlin. Cardinal Karl Lehmann was among the 100 personalities who have sent congratulations for the 100th edition of the Katholikentag, founded 160 years ago: the anniversary “reminds us of the conquest of greater liberty, also for the Churches,” he writes.

This is the first time ever that German homosexual groups are officially welcome at the Katholikentag. A “Rainbow Center” – a meeting place for LGBT believers and LGBT groups – will be set up as the Catholic Church follows suit after similar “Protestant days” in 2015 in Stuttgart welcomed not only a Rainbow Center but also about 100 events for LGBT’s, “queers” and “gender issues.”

The German website queer.de happily gives details of the upcoming Katholikentag. Many groups, including the Catholic Lesbian Network, the Workgroup Homosexuals and Church, as well as so-called “grassroot” Catholic pressure groups, will be present. Manuela Sabozin of the Catholic Lesbian Network said: “It’s not that we are being tolerated by the Katholikendag, we have on the contrary been able to push our themes to the fore.”

These themes include the “daily life of rainbow families,” acceptance of “trans” persons and “genderphobia” in the Church, and the possibility of giving same-sex couples an official blessing. Most of the events, underscores queer.de, “will be included within the official schedule of the Bishops’ conference.” However, the Rainbow Center itself will be set up in an Evangelical center in Leipzig. Homosexual groups will celebrate an ecumenical event there with performances by the “Tollkirsche” (“deadly nightshade”) cantors and a Lesbian choir, “Queerubim”.

German Catholic blogger Mathias von Gersdorff wrote about the upcoming events in Leipzig and his article was picked up by the Rainbow Center’s Facebook page with the comment: “Hurrah, we are the star guests!” The Center is inviting its members to join the fun…

The fact that the Rainbow Center is being hosted by a non-Catholic organization in Leipzig could lead trusting Catholics to believe that the LGBT community is availing itself of an endorsement that it never received. However, the authorized website of Katholikentag is announcing all the “gay” and “queer” events named by the Rainbow Center, including those that will take place at its own venue, and groups such as the Catholic Lesbian Network and the Workgroup Homosexuals and Church find their place in the list of Church groups covering a whole range of charitable and hierarchical organizations, which also includes the Association of Catholic Priests and their Wives.

Among the events that will take place under the auspices of the Central Committee of German Catholics are a forum on “Marriage for all,” on the issue of “equality between homosexual and heterosexual couples,” a workshop called “Cross and Queer” presenting “gay and lesbian communities within the Church as a basic model,” and a workshop entitled “Even lesbians and gays grow old.” Experiences between lesbians are on the program, and the theme “Praying the Psalms today – submitting new Psalms” will also be presented by the Catholic Lesbian Network.

Not surprisingly, this year’s general theme for the Catholic Days of the Church in Germany is not “God served first” (as Joan of Arc was wont to say) but “People first”: “What should we want and do for people of today to live together in the future?” The Lutheran Church of Saxony will be officially presented together with the eastern dioceses of Germany.

Mathias von Gersdorff gives many more details. For example, on the political front concerning “marriage for all” – which includes same-sex “marriage” – one of the main speakers will be openly gay Parliament member for the Christian Democrats (CDU) Stefan Kaufmann. Biblical studies will focus on “A new vision of Scripture” and, for transgender persons, a reflection on “the tension between faith and Bible.”

While a lay organization such as the Central Committee of German Catholics does not represent the official hierarchy of the Catholic Church, the official support it enjoys and the fact that a number of Masses will be offered as part of these Katholikentagen where the homosexual lifestyle will be sanctioned and even glorified is a scandal in itself.