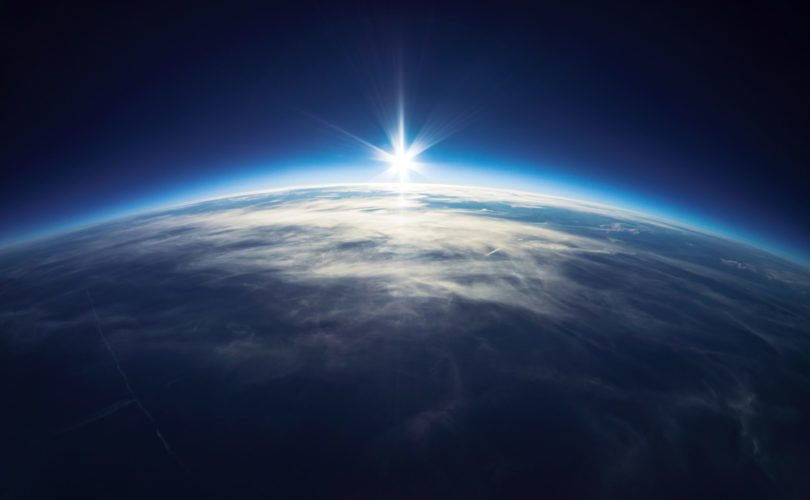 February 14, 2020 (LifeSiteNews) – Several Catholic dioceses in Germany are participating in a campaign that encourages fasting in order to protect the planet from “climate change.” In a brochure created by the campaign “Klimafasten,” the organizers express their solidarity with the demands made by “Fridays for Future.”

While mainly sustained by various Protestant communities in Germany, four Catholic dioceses have joined the campaign. Apart from the Archdiocese of Berlin, this includes the dioceses of Eichstätt, Hildesheim, and Rottenburg-Stuttgart.

Last year, more than 440 scientific papers were published that cast doubt on climate alarmism and the claim that man-made carbon emissions are causing changes to the climate.

The fast to protect the planet would take place during Lent. In German, the connection between Lent (“Fastenzeit”) and fasting (“fasten”) is evident from the words themselves.

“An ‘ethics of enough,’ which the churches have long been demanding, is becoming increasingly plausible and is urgently needed. The climate fasting campaign offers various suggestions for practicing such an ‘ethics of enough.’ It is about ensuring that everyone – the present generation as well as future generations – has enough to live on.  But it is also about ensuring that those who have too much can let that be enough,” the organizers explain.

“With this Lenten campaign, we place ourselves in the Christian tradition, which commemorates the suffering in the time before Easter and consciously practices renunciation in order to become free for new thoughts and different behavior. Climate change is causing suffering because it endangers the lives of people, animals and plants. Protecting the climate requires renunciation. However, it is always a gain if we succeed, alone or in the community, in making life more climate-friendly,” states the brochure about the campaign, which is set to begin on Ash Wednesday.

The Catholic understanding of penance, of which fasting is a part, is, however, different from the climate-change fasting program. The Catechism of the Catholic Church speaks of penances as helping to configure us to Christ, “who alone expiated our sins once for all. They allow us to become co-heirs with the risen Christ, ‘provided we suffer with him.’”

According to “Klimafasten,” the first week of Lent will focus on the ecological footprint. Based on a kind of quiz, participants are able to determine how conscious they are of the effect their lifestyle has on the environment.

One of the statements within the quiz says, “For distances under 3 kilometers (a little less than 2 miles), I walk or use my bicycle.” The participant can choose between “always (0 points), often (3), rarely (6), or never (9).” The lower the score, the better the ecological footprint.

The remaining weeks, then, focus on doing better in various areas of life, beginning with power usage. Suggestions include getting rid of one unnecessary electronic device, lowering the room temperature, and checking if switching to a provider of sustainably sourced power might be an option.

The third week looks at food items. “In the supermarket, I decide to buy products at a reduced price which have an expired best-before date,” one suggestion reads.

This is followed by developing a strategy for using less information technology, for instance by using a smartphone that has room for two SIM cards instead of one. This would enable the participant in fasting to protect the planet from climate change to get rid of the phone used either for business or privately. Ironically, another suggestion for week four seemingly contradicts this. “I use my equipment as long as possible and check whether I can repair or technically upgrade it,” it says.

The fifth week studies car usage and asks, “Where and how can I travel in a way friendly to the climate for my next vacation?”

Week six focuses on the use of plastic in everyday life. The brochure produced by “Klimafasten” suggests using cotton bags for groceries instead of plastic ones. Another suggestions is to go on a walk and pick up plastic trash along the way.

The last week says, “For Easter, we are happy that there is someone who gives us strength for change and reminds us that we can become a blessing to our fellow creatures, people, animals and plants.” Among other things, the brochure encourages the participants to tell others about their experiences.

Conservative German newspaper Junge Freiheit reported on various ideas for worship services proposed by “Klimafasten.” However, these ideas would most likely apply only to Protestant communities.

“On the website of the campaign, there are also ‘theological impulses’ for ‘climate fasting.’ … Among other things, it is recommended to distribute pens and paper so that every church member can write down ‘ideas for a climate-friendly church.’ The sheets of paper can then be attached to a picture of a tree that has previously been hung on a pin board. The ‘Tree of Life’ by Gustav Klimt, for example, would be suitable,” the German newspaper wrote.