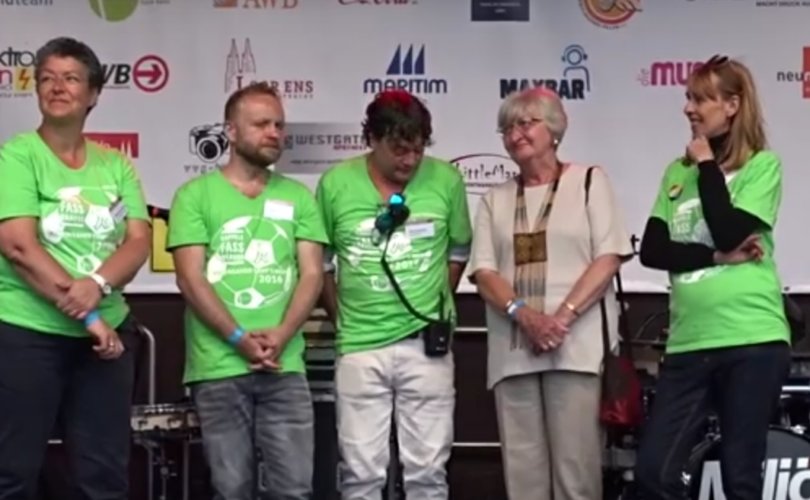 Hannelore Bartscherer (second from left) is chairwoman of the Catholic Committee in Cologne, Germany, which received an award for supporting an LGBT soccer tournament.

COLOGNE, Germany, July 7, 2016 (LifeSiteNews) — At the beginning of July, Cologne is swamped with LGBT “pride” events. Every year, gays and lesbians meet in the city for two weeks for events to promote public awareness for their cause and to foster their political agenda with extravagant demonstrations.

Marriage equality rights and gender education are at the top of the list. The Christopher Street Day Parade (CSD) on July 3 is a spectacle of unrestrained nudity and flamboyance. The parade mimics the famous traditional carnival parade of Cologne, but instead of candy, condoms are thrown from the floats into the crowd.

The Catholic Committee in Cologne continues to actively seek “dialogue” between Church and the LGBT groups in a non-discriminatory fashion. Hannelore Bartscherer, chairwoman of the committee, explained that the process of dialogue began 10 years ago to help foster “integration.”

“We have talked about what the goal of the CSD in Cologne was in a nutshell. The topics of equality and participation in society surfaced. Therefore, we began a dialogue about values and all that supports us,” Bartscherer explained.

This year, the committee’s commitment was confirmed with the “Come-Together-Heart,” an LGBT award.

This award is given after a soccer tournament, the “Come-Together-Cup,” which is organized once a year by gay and lesbian activist groups that invite soccer clubs from the region to participate. The prize is given at the end to persons with special merit. In addition to the sporting event, Bartscherer also voluntarily supports the “Run of Colours,” which is a fundraiser for people with homosexual tendencies who have AIDS.

“It is the job of the Catholic Committee of Cologne to stir into politics, to pipe up. Lesbians, gays, bisexuals, and transgender individuals are visibly present in Cologne. They are a natural part of society. They must stay welcome in the Church,” Bartscherer said in an interview with Cologne’s “Domradio.”

In response to the question about the committee supporting her, she said, “Yes, and it has been so from the get go.” She added: “Which values do we talk about with gays and lesbians as Christians? Responsibility, relation, and fidelity.”

Pope Francis recently made a comment that was received by the media as an invitation to Christians to apologize to people with homosexual tendencies. Asked about the impact of this statement, Bartscherer responded: “You have no idea how much they [LGBTs] like to hear that [from the Pope].” She went on to say that no homosexual may be excluded from full participation in Church activities, especially those saying: ‘That is also my Church! I belong to it, too.’ People who say that cannot be excluded.”

A similar, yet almost more scandalous, approach from the local Church toward the LGBT lobby can be seen in Frankfurt, where the Christopher Street Day will take place July 15-17. At the event, a “Liebfrauenkirche,” a Catholic monastery church run by Capuchins, is organizing an ecumenical prayer service. Collaborating in this initiative are “Project Gay and Catholic,” “Ecumenical work group of homosexuals and Church,” and the “LGBT Ministry of the Anglican/Episcopal churches in Frankfurt.”