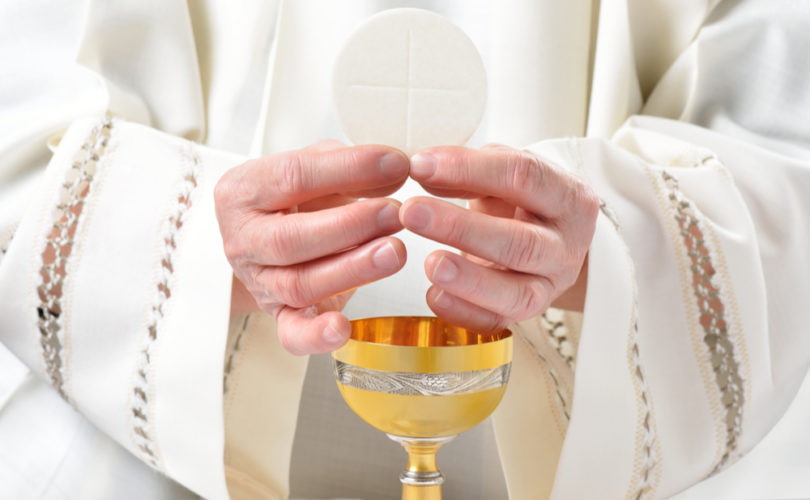 FRANKFURT, Germany, March 17, 2021 (LifeSiteNews) — Christian leaders in Germany, both Catholic and Protestant, have decided to go ahead with plans to host an ecumenical prayer meeting complete with intercommunion, contravening the Congregation for the Doctrine of the Faith’s (CDF) express ruling that “reciprocal participation in the Lord’s Supper and the Eucharist” is not possible for Catholics and non-Catholics.

Thomas Sternberg is the president of the Third Ecumenical Church Congress (ÖKT), as well as the leader of the Central Committee of German Catholics. In a press release, he invited Christians of all denominations to receive Holy Communion “in many churches” at the event running from May 13 to 16. “On the basis of the Common Testimony we can make our decision of conscience [to receive the Eucharist]. The doors are open,” he said.

The statement adds that the ecumenical event will see “Christian congregations open their doors in the knowledge that Jesus Christ invites you to the Lord’s Supper and the Eucharist.”

“Christians of all denominations have the opportunity on this evening to come in, get to know different traditions and — following their own conscience — to celebrate the living memory of Jesus Christ.”

“The signal should go out from Frankfurt to seek ecumenical togetherness, in everyday life and in the mutual visit of congregations.”

The ÖKT’s proposal to include interfaith communion was taken from a 2019 document drafted by the Ecumenical Study Group of Protestant and Catholic Theologians, known in Germany as ÖAK, called “Together at the Lord’s Table.” The document was drafted under the co-chairmanship of the now-president of the German Bishops’ Conference, Bishop Georg Bätzing of the Diocese of Limburg, and the retired Lutheran bishop Martin Hein.

The ÖAK is not directly affiliated with the Catholic Church in Germany, nor the Protestant churches, but advises both groups on its studies.

The document drew the attention of the CDF, which was prompted to send a letter to Bätzing, resolutely rejecting the notion of intercommunion: “The question of the unity of the Eucharist and the Church, in which the Eucharist presupposes and brings about unity with the communion of the Church and her faith with the pope and the bishops, is undervalued in the aforementioned document.”

“Essential theological and indispensable insights of the Eucharistic theology of the Second Vatican Council, which are widely shared with the Orthodox tradition, have unfortunately not been adequately reflected in the text.”

The congregation reminded the bishop of Limburg that communion therefore cannot be shared with Protestants in a “Eucharistic meal fellowship.” The “basic Catholic understanding” of the Eucharist and, indeed, the real presence, “is not sufficiently clarified” in the interfaith document, leading to a conflict with “central themes of the depositum fidei, truths of faith, de fide tenendae,” the CDF wrote in September 2020.

They concluded that “[the] document cannot therefore serve as a guide for an individual decision of conscience about approaching the Eucharist.”

— Article continues below Petition —
PETITION: Call for Vatican to rescind restrictions on private and traditional rite Masses at St. Peter's
Show Petition Text
19381 have signed the petition.
Let's get to 20000!
Thank you for signing this petition!
Add your signature:
Show Petition Text

Bätzing, who also serves alongside Sternberg as co-president of the controversial “Synodal Path,” subsequently released a letter on March 1, ahead of the upcoming ÖKT conference, stating his concern that there should be “no general, inter-denominational reception of the Eucharist” or “new forms of Eucharistic celebration.”

He did, in defiance of the CDF’s instruction, go on to say that, for both Catholics and non-Catholics, the “prerequisite for a worthy reception of the Eucharistic gifts … is the examination of one’s conscience,” adding that “[as] pastors, we respect the decision of conscience when someone receives Holy Communion after serious examination and in accordance with the Catholic faith.”

Bätzing told the priests of his diocese that he “does not want to endanger under any circumstances” the “valuable opening” between Catholic and Protestant communion represented by the ÖKT-backed event. “Therefore, I strongly expect and emphasize that what I have said above will be observed in the Eucharistic celebrations,” he wrote.

Just a week prior, Bätzing had confirmed that he would not deny Holy Communion to non-Catholics who, by a “personal decision of conscience,” seek the sacrament. “I have no problems with it, and I see myself in line with papal documents,” he professed.

Bätzing observed that such intercommunion has already been “in practice” in Germany “every Sunday,” and, by his determination, does not demand any correction. While claiming he does not distribute the Eucharist indiscriminately, the prelate admitted that neither does he “deny Holy Communion to a Protestant if he asks for it.”

German clergy and laypeople involved with the “Synodal Path” have long pushed some of the most controversial and “progressive” ideas in the Catholic Church. In addition to Christian intercommunion, German prelates, like Cardinal Reinhard Marx, have favored instrumental doctrinal upheavals ranging from the ordination of women to the priesthood to changing the teaching on homosexuality and contraception, as well as allowing married priests.