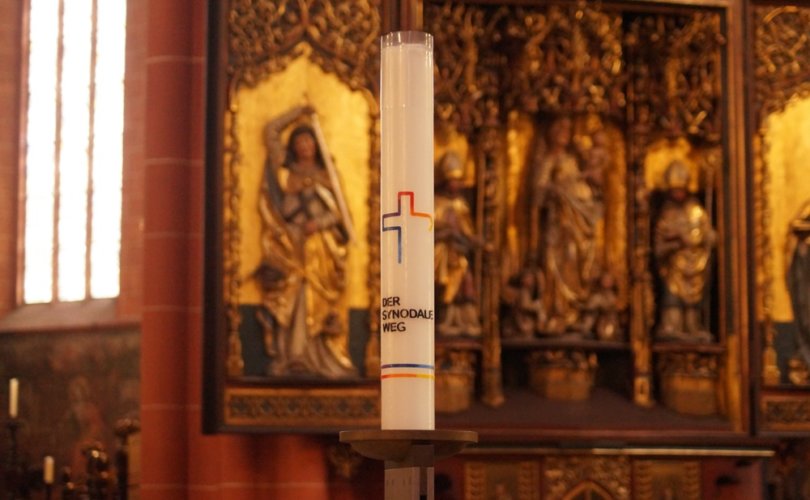 (LifeSiteNews) — A group of German Catholic laypeople has issued a nine-page manifesto condemning the Synodal Path launched by the bishops which seeks to change Church teaching on issues such as female priesthood, homosexual relationships, and priestly celibacy.

The document, entitled in English “New Beginning – A Manifesto for Reform,” was written by a group of German theologians, philosophers, anthropologists, and publicists.

Authors include the well-known philosopher Hanna-Barbara Gerl-Falkovitz and the publisher of the Youcat catechism series, Bernhard Meuser. Together, they formed a group called Arbeitskreis Christliche Anthropologie (Working Group for Christian Anthropology).

“The Reform Manifesto exists because the Catholic Church in Germany is in a dramatic situation,” Meuser said. “The so-called Synodal Path is trying to use strategic force to push through reforms that go further in their radicalism than the changes demanded of the faithful by the Second Vatican Council.”

The manifesto, which can be read in English, is made up of 9 different parts, each relating to a specific moral concept currently under attack from the synodal movement.

The Synodal Path has no legitimacy in the Church

The manifesto starts by challenging the canonical legitimacy of the German synodal movement, stressing that it’s not a “synod,” and is deprived of any authority according to canon law.

“We reject its claim to speak for all Catholics in Germany and to make binding decisions for them,” write the authors who also denounce that the proposals made by this movement will, once implemented, “ultimately lead to a committee-oriented lay redistribution of power, as well as to a secularization of the Church.”

An erroneous concept of reform

The authors of the manifesto then accuse the synodal movement of fostering an erroneous notion of reform. They point out that the spirit of reform that animates the movement comes from a desire to adapt the teachings of the Church to current mainstream ideologies, rather than an attempt to more easily guide people towards the truth:

“Ethical discussions, for example, tend to revolve around the shift from ‘what was forbidden yesterday’ to ‘what is somewhat permitted now,’ so that what remains of the church can smoothly fit in with the cultural mainstream.”

The authors insist that true reform of the church has never been synonymous with a denial or watering down of its moral teaching: “The Church has never recovered its ability to be the salt and light of the world by way of lowering its standards.”

Paving the way to schism

In the third part of the manifesto, the authors denounce the quasi-schismatic attitude of the instigators of the synodal movement, who, in complete disregard for the unity of the Church, have issued new teachings without the approval of the relevant church authorities while ignoring all objections including, according to the authors, objections raised by Pope Francis himself. The Pope, however, has never officially condemned the Synodal Path.

“We are ashamed that these objections were ignored, relativized and ridiculed, irrespective of their binding status,” denounce the authors, before affirming, “We do not want to be a ‘Church of disobedience and rebellion.’”

An attempt at secularizing the Church

The attempt by the German synodal movement to secularize the Church was addressed in the fourth part of the manifesto.

According to the authors, promoters of the synodal movement call for the power of bishops and priests to be “broken down” and “brought under the authority of lay people (functionaries).” Against this idea, the authors of the manifesto present the traditional notion of a clerical Church and condemn the concept of a Church where power is delegated to lay people.

“No one needs a Church in which vocations are replaced by appointments, devotion, by contracts, and trust, by control,” they write. “We do not want a Church of functionaries.”

Commenting on the manifesto and answering a question regarding the apparent lack of opposition from the German bishops to the synodal movement, Meuser provided LifeSiteNews with the following comment:

Some [German] bishops are themselves enthusiastic about the liberal agenda (…) In general, the bishops are on the defensive because of the abuse crisis. In a weak hour, however, bishops loyal to the Magisterium have also allowed themselves to be taken by surprise by the “Central Committee of German Catholics” and forced into processes in which a bishop’s vote counts just as much as any other vote of the 230 synod members. And among them are people who want to introduce gender into the church and those who say, “There are no problems with church sexual morality. Church sexual morality is the problem.”

An attack on the priesthood

The manifesto accuses the promoters of the synodal movement of trying to illegitimately impose a female priesthood on the German church. In part five, the authors reject the idea that the traditional teaching of the Church on the priesthood is a form of discrimination against women. “It is absurd to interpret the assignment of the priestly ministry to men as a [form] of discrimination [against] women,” they write, adding it’s “only coherent” that the priest “who symbolically represents Christ, must be a man … We refute the claim made by the Synodal Way according to which this order of the priesthood is just a matter of preserving a reactionary male bastion …”

The authors of the manifesto then cite Pope John Paul II’s letter Ordinatio Sacerdotalis, in which he recalled that “the Church has no authority whatsoever to ordain women as priests, and that all the faithful of the Church have to adhere to this decision which is binding for all times.”

An attack on marriage

In part six of the manifesto, the authors addressed the Synodal Path’s attack on marriage by adapting it to today’s sexual morality. The manifesto condemned the fact that according to this “new sexual morality,” “marriage alone” is to be replaced by “marriage first.”

“Through this, the sacrament of marriage degenerates into an ideal that is far removed from life and only aspired to by a questionable elite,” claim the authors, who also point out that “instead of offering ways of healing and instruction for growth in the life of faith, the emphasis is on adapting [marriage] to the cultural mainstream.”

This, in turn, far from helping people in irregular situations, prevents them from seeing the truth: “By doing so, one does not the serve the vulnerable and the injured people, but on the contrary, the healing light of the Gospel is kept from them and one obstructs their human potential to live a good and godly life.”

Part seven of the manifesto treats of the question of the blessing of same sex couples. The authors accuse the synodal movement of exaggerating the perspective of mercy and pastoral concerns expressed by Pope Francis to “people in irregular situations” in his encyclical Amoris Laetitia.

They claim that the movement no longer takes into account the “brokenness of human nature (and with it sin).”

“The tendency is to proclaim: ‘a right to sexual intimacy for all’ that obstructs the fruitful complementarity of the sexes in God’s order of creation and undermines the normativity of marriage.”

An attack on vocations

In part 8, the manifesto claims that by secularizing the Church, the synodal movement constitutes an attack on vocations, particularly to the priesthood.

“The Synodal Way obscures the specific calling of the priesthood by marginalizing it theologically and strategically,” write the authors. They explain that “it does so by systematically trying to promote theologically qualified laypeople into substitute positions for the priesthood.”

In the final part, the manifesto denounces the instrumentalization of sexual abuse in the Church by the Synodal Path to achieve its goals, arguing that “one can justifiably speak of ‘abuse of abuse’ here, because sexual abuse has been used in the Synodal Way to enforce unrelated goals and positions in the Church.”

“What actually happened was an instrumentalization of the crisis of abuse for the implementation of a well-known politico-ecclesiastical agenda,” the authors explain.

On this particular issue, Meuser commented, “They invoke abuse. But in truth, they are not concerned with the sexual abuse and its victims, but with quite different goals: that women can become priests, that homosexual relationships be recognized by the Church, that lay people come to power, that celibacy be abolished, that the sacramental and hierarchical constitution of the Church be replaced by ‘democracy.’”

The Youcat published added that “in short, they have opened the box and brought out again all the demands of leftist theologians and church activists. In effect, this would lead to a Protestantization of the Catholic Church.”