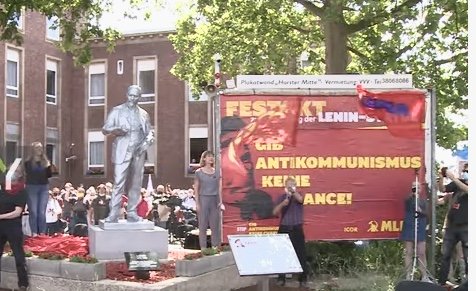 June 23, 2020 (LifeSiteNews) – A 6.5-foot high statue of Vladimir Ilyich Ulyanov, who went down in history as Lenin, founder of the most deadly incarnation of Marxism and Soviet Russia’s first head of government after the October Revolution of 1917, was unveiled last Saturday in the German town of Gelsenkirchen near Dortmund, erected on private property by the German communist party.

It is the first statue of Lenin to be erected in what was formerly “West Germany,” the Federal Republic of Germany that did not fall under communist rule in 1949, and remarkably, the event took place more than 30 years after the fall of the Berlin Wall.

By a strange coincidence, Lenin’s statue was honored by a public installation at a period in time when many statues of so-called white oppressors, from Christopher Columbus and St. Junipero Serra to Isabella the Catholic of Spain and Winston Churchill were tagged, vandalized or toppled.

This is despite the fact that Marxist-Leninist communism was responsible for more than 100 million deaths in the 20th century alone, according to the (conservative) academic estimate of French researcher Stéphane Courtois, and to the enslavement of millions more.

The municipal council of Gelsenkirchen tried in vain to prevent the cast-iron statue, produced in 1957 in former Czechoslovakia, from being placed in a square in front of Germany’s tiny Marxist-Leninist Party (MPLD) headquarters, on a piece of private land but in full view of the public.

“Lenin stood for violence, oppression and terrible human suffering,” the district council’s main parties stated in a resolution. The authorities of Gelsenkirchen also issued a construction ban based on the fact that the statue of Lenin would spoil the view of a historical building, a classified construction of the 1930s erected by a building society that actually belongs to the MPLD. The statement added that all legal means would be used to block the small communist party’s initiative. The council “will not tolerate such an anti-democratic symbol in its district,” added the statement, according to a report by Deutsche Welle.

But even the council’s esthetical objections were rejected by the Higher Administrative Court of North Rhine-Westphalia in Münster last March, depriving the local council’s construction ban of its binding force. The official inauguration was supposed to take place later that month, days before the 150th anniversary of Lenin’s birth on April 22, but was postponed because of the coronavirus.

Finally, the inauguration took place on June 20, in presence of some “800” sympathizers, according to the MPLD, in a 2 1/2-hour ceremony with nonstop speeches in homage to the communist dictator. The speeches were delivered under a large red banner with the words: “Don’t give anticommunism, fascism, passeism and anti-Semitism a chance.” The statue itself was covered with a red cloth until its official unveiling.

The meeting took place under police protection. Two counter-demonstrations, including representatives of right-wing groups, took place, according to a police spokesman.

Gelsenkirchen has launched a historical initiative to counter the impact of Lenin’s statue in one of its squares. Under the tag “#keinplatzfuerlenin” (no place for Lenin), public figures have been encouraged to air their take on the statue.

Some, such as Dr. Rainer Eckert, historian and former director of the Leipzig Forum for Contemporary History, see Lenin as a true tyrant: “The murder of Stalin and the death in the GULag are slowly being forgotten today. But that will be delayed given the scale of these crimes. Another question, however, is what the memory of the ‘Great October Socialist Revolution’ and Lenin as its leader actually is. Too many are willing to take a largely positive view of both. This is wrong. (…) Stalin’s crimes followed up on Lenin’s misdeeds and increased them beyond belief. Therefore ‘Leninism’ and ‘Stalinism’ cannot be seen as opposites, but belong to the same kind of totalitarian exercise of power.”

Others are more lenient, such as Pr. Stefan Berger, director of the Institute for Social Movements, at the Ruhr University in Bochum, who wrote: “To my taste, there were too many anti-communist reflexes in the debate about the monument. Is it still necessary to hit a dead horse today? In short, I actually think that if we still have dozens of Bismarck monuments, we can also accept a monument to Lenin, even if we are not Leninists and are rather critical of Lenin. I think a democratic culture of commemoration has to endure these tensions.”

Regarding Lenin, however, there is a difference of nature and not of degree with other historical figures, controversial as they may or may not be.

Lenin was the inspirational force and active leader of the Bolshevik revolution, whose writings inspired many to use any kind of violence, lying and agitation to further the socialist and communist aims of Marxist theory, by transforming it into a “praxis” guided by revolutionary tactics and strategy.

During the first years of Soviet Russia and until his death in 1924, Lenin presided over the first mass killings, the overthrow and murder of Tsar Nicholas II and the Russian imperial family, the reversal of traditional morals, the first organized famine and the establishment of a cruel secret police under Felix Djerzinski, whom he saw as a hero of the Revolution. His favorite advice was to make prisoners at the infamous Lubianka “suffer as much as possible and as long as possible” in order to obtain “confessions.”

Djerzinski set up the Red Terror from 1918 to 1924 that killed both the “bourgeois” and rebellious workers, whose murder Lenin himself encouraged under the accusation of “sabotage” of the Revolution.

In a foundational book about Lenin, Inventor of totalitarianism, published in 2016, French historian Stéphane Courtois explained how Lenin differed from the actors of the “Terreur” during the French Revolution, such as Robespierre, because he went much further in his legitimation of revolutionary terrorism. Politics, according to Lenin, “is the continuation of war by other means.” Lenin’s aim was to abolish property and in order to do that he was prepared to order massive killing even at a time when the future of his revolution was not at stake.

As early as 1905, Lenin was already encouraging his circle of Bolshevik activists to prepare violently to confront a Russian “Vendée” during their first revolutionary attempts. The Vendée, which was subjected to the first modern organized genocide because it gave rise to the French army of peasants and local nobles who battled “for God and King” against the anti-Catholic Revolution of 1789, was in fact Lenin’s first inspiration, according to Courtois.

Many statues of Lenin are still standing in Russia and his Mausoleum remains on Red Square in Moscow. In the Soviet Union’s satellite republics, they have been overwhelmingly dismantled. That a new statue should have been erected and honored in Germany is a sad omen. No one would have accepted the same to have taken place for Hitler, another socialist tyrant. Such a move would have aroused international fury.