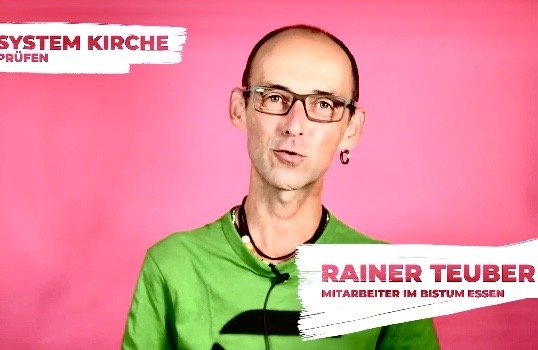 Rainer Teuber says he is 'gay, catholic, married to my husband since 2004 and have been working for the Catholic Church since 1996.'YouTube

ESSEN, Germany, September 1, 2020 (LifeSiteNews) – The German Diocese of Essen launched an attack on Catholic teaching, releasing four short videos featuring employees and volunteers of the diocese demanding to change what the Church has taught since the time of Jesus Christ, including the all-male priesthood and traditional marriage.

A separate video opens with Fr. Stefan Wiesel, who is not dressed like a priest, complaining about how “exhausting” it supposedly is “when people come to me and say: ‘Can’t you tell the others what the teaching of the church is, and that they should follow it?’ And that they must live exactly as it has been written down somewhere.”

In other words, for Wiesel, the Word of God as presented to Catholics in the Bible is merely something being “written down somewhere.”

“I want a church that is a learning church, and that seeks to understand, and that listens and looks at what people’s issues and questions are, and does not give answers to questions that nobody has asked,” he said.

Another woman, Martina Stodt-Serve, demanded, “I want a church that does not make it dependent on gender and position whether I am allowed to do something or not. It should enable and instruct people who feel called by God to take on more responsibility, regardless of their gender and position.”

In another video, a priest can be seen wearing a t-shirt, not even a collared shirt. The t-shirt’s symbolism is not entirely obvious, but it displays the rainbow colors generally used by supporters of homosexuality and gender ideology.

“I dream of a church that does not ask about gender, but about vocation, and this vocation is independent of whether somebody is a woman, a man, or diverse,” Fr. Maximilian Strozyk says in the video.

None of the four videos featured a single voice opposing any changes to Catholic teaching. The four videos roughly corresponded to the four main issues discussed during the Synodal Path of the Church in Germany.

In fact, the working document of the German bishops’ synodal path to be voted on this month proposes to redefine marriage as only one among many other ways “to live love and sexuality.”

In one section, the four-page document states, “The openness for the passing on of life is not decisive for each individual (sexual) act, but to be affirmed in the overall course of a binding and long-term partnership.”

The document tries to redefine “the concept of fertility” to include not just “the openness to new life,” but also “a social and personal dimension.” Accordingly, “(e)ven same-sex couples and other couples who cannot give birth to a new life have the potential for a fertile life.”

The document does not clarify that, according to Catholic teaching, a man can choose only a woman, and vice versa, in marriage, “for the shaping of human sexuality.” Instead, it says, “We see marriage as the preferred but not the only way to live love and sexuality in a relationship.”

The members of the synodal path, including all bishops and dozens of lay members named by the Central Committee of German Catholics and other organizations, are set to vote on the language of the document on sexuality, as well as other documents, on Friday.

Meanwhile, the Diocese of Essen has already demonstrated where it stands on the issues.