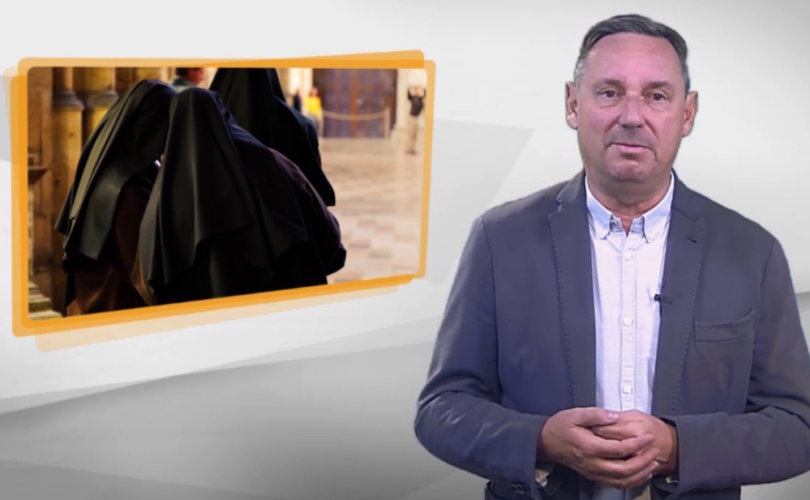 According to the video, the Church is lacking a rite that would tell homosexuals 'your love is good.'

October 5, 2016 (LifeSiteNews) – In a video message titled “Commentary of the Week,” published on September 30, 2016 on the website of the German diocese of Rottenburg-Stuttgart, theologian Eckhard Raabe praises the witness of two lesbian ex-nuns who claimed to get “married” in Italy.

The two former Franciscan religious sisters, Federica (44) and Isabel (44), met during a pastoral outing and “fell in love” with each other. This year they celebrated their “wedding” in Pinerolo, a commune of the province of Turin.

Theologian Raabe praises the bold witness of the “marriage.”  He quotes Federica saying, “We wish for a Church that accepts all people,” and adds, “I do wish so myself.”

“Of course in the Church all are welcome regardless of their orientation,” he explains, “only as regards the sacrament of marriage for homosexuals does she still lack, as well as regarding the blessing for the couples.”

The blatant push for homosexual unions on the side of Raabe sees the “love” professed by the two nuns as a welcome example, and he admonishes the Church for failing to accept the “marriage” as legitimate. “A rite is lacking with which the Church could communicate to the homosexual couples: it is good, your love is good, and you are an important part of the Church.”

Raabe expressed his hope that, “Federica and Isabel do not turn away from the Church after having left the convent,” and that the Church will finally change: “The Church who on the one hand preaches love on the other hand cuts out its diversity.” He adds in a smug tone: “But most of all, I wish that the two lovers won’t turn away from God, since God’s love is larger than our human pettiness.”

The video was produced by the Rottenburg-Stuttgart diocese in the German state Baden-Württemberg and published on the website and on its YouTube channel. Bishop Gebhard Fürst is the official “media bishop” appointed by the German Bishop’s conference.

In a phone call to the diocese’s press office, LifeSiteNews requested a statement by email. LifeSiteNews received no further correspondence regarding the video.

The two nuns, who were previously reported on in Italian media and who wished for anonymity, had their vows renounced in the Vatican in order to make the civil union possible. One is Italian, the other South American. In an interview with the Italian newspaper La Stampa, the South American, Isabel, explained: “God wants happy people who live their love in the light of day.”

The two ex-Franciscan sisters are not content with their civil “marriage” alone. Rather, both have expressed the wish to have it supplemented by a religious ceremony with Fr. Franco Barbero, an Italian priest notorious for his advocacy of gay “marriage.” He was suspended a divinis – that is, he was banned from administering the sacraments – by St. John Paul II in 2003. For Barbero, this will be the 20th ceremony of blessings for homosexual couples this year.