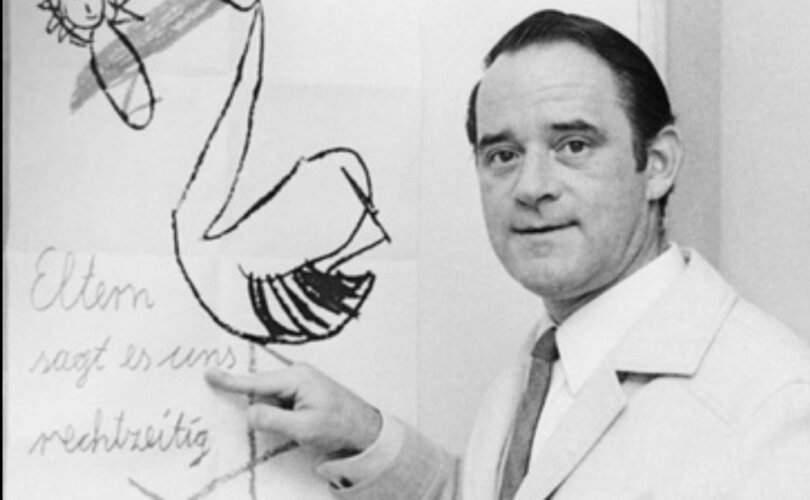 (LifeSiteNews) — The German pro-family organization “DemoFürAlle” has released a new documentary exposing one of the biggest pedophile scandals in Germany’s history.

For the second half of the 20th century, Berlin youth welfare offices placed children and adolescents in the care of pedophiles as part of the so-called “Kentler experiment.” The project was named after Professor Helmut Kentler (1928-2008), the mastermind behind the pedophile network.

“KentlerGate” tells the story of the sexologist and his pedophile experiment and suggests that the pedophile network around Kentler probably still exists today. The film also shows how Kentler’s ideology is the basis for modern sex education in German schools and daycare centers.

“Helmut Kentler was firmly convinced that it is good for boys to have homosexual contacts with adults, i.e., pedosexual contacts,” biologist and educator Dr. Karla Etschenberg states at the start of the film.

The point of the “Kentler experiment” was to give homeless and delinquent boys to male pedophiles. The pederasts would take these children and teens into their homes to supposedly care for them and help them regain an “ordered life.” In exchange, the foster fathers would get “sexual acts” with the boys, as DemoFürAlle co-founder Hedwig von Beverfoerde explained in the documentary.

According to DemoFürAlle, Kentler’s approach could be summed up as “Resocialization of delinquent youths through placements with pederasts.”

Kentler had connections to the Senate of Berlin, the governing body of Germany’s capital. He convinced government officials in Berlin to agree to his experiment, as it would be a solution to the problem of delinquent adolescents. This ensured that the government-run youth welfare offices put children into the care of pedophiles.

“For 30 years, the Senate not only organized and permitted this, but also funded it,” von Beverfoerde stated. “In the beginning, it was only adolescents, but later it would be children from the age of six” who were made to live with pedophiles.

Etschenberg said that Kentler’s main thesis was “Sexuality can only be taught if something sexual happens.” He believed that children should therefore be seen as “sexual beings” and should be sexually stimulated so that they would learn to have a “positive relationships to their bodies and their sexual function.”

Kentler was openly homosexual and had three adopted sons and one foster son himself.

Professor Kentler was one of the most respected sexologists of this time, and his ideas found their way into the curricula of public schools. According to the documentary, the so-called “sexual education of diversity” taught in many schools is based on Kentler’s basic premise of the “child as a sexual being.”

One of Kentler’s students, Uwe Sielert, is the founder of the so-called “sexual education of diversity” and has “monopolized” sexual education in Germany, von Beverfoerde asserted.

Kentler and Sielert also asserted that children are more protected against sexual abuse if they “know more” about sex.

“It is exactly the other way around,” von Beverfoerde declared. If children are sexualized, they are more likely to become victims of sexual abuse because they view it as “normal” if “sexual acts are done with them, on them, or in front of them.”

“Modern sex education breathes this pedo-criminal spirit of Helmut Kentler from A to Z.”

RELATED: LGBT daycare centers to open in Berlin with pro-pedophilia advocate as board member

The horrific actions of Helmut Kentler and his pedophile network became public years after his death in 2008.

In 2016, the Senate of Berlin commissioned a study to look into his case after public pressure followed media reports. Furthermore, two victims of the Kentler experiment, called Marco and Sven, went public with the details of their abuse stories in 2017.

Marco said that he was sexually abused by his “foster father” for a decade and often bled after being raped. Marco was officially declared “unable to work” by a psychologist due to his trauma; he still suffers from panic attacks whenever he sees men with haircuts like that of his abuser. In 2021 the Senate of Berlin granted compensation payments to both Marco and Sven.

It is very likely that this systematic pedophile abuse was possible only with the help of a large network of influential people, especially within the Senate of Berlin. A 2020 report by the University of Hildesheim stated the following regarding the Kentler experiment:

Overall, we assume that there was a “network” […] of actors through which pedophile positions were tolerated, strengthened, legitimized, and pedophile assaults in residential communities and care settings were not only tolerated, but also arranged and justified.

It can be assumed that several employees of the Senate Administration as well as of district youth welfare offices were intertwined in this network and thus organizationally facilitated access, e.g. for pedophile men to the young people […]

Many have suspected that the pedo-criminal network around Kentler, which may have included high-ranking officials in academia and politics, did not simply disappear when Kentler died. A former member of the Senate of Berlin, Marcel Luthe, attempted to acquire a list of people who were involved in the crimes but did not receive a reply to his request.

“People do not disappear just because a certain structure is gone,” Luthe stated in the documentary. “The networks still exist, of course.”

The investigation into the case and the pedophile network of Helmut Kentler is still ongoing. Von Beverfoerde told LifeSiteNews that the DemoFürAlle chose to publish their documentary on October 27 because a new interim report about the case, commissioned by the Senate of Berlin, is set to be published by October 31, 2022.