The domestic intelligence agency is now in a position to officially monitor certain groups and people by 'storing personal data, recruiting undercover agents, and, in justified cases, monitoring communications.'
By LifeSiteNews staff

BERLIN, May 3, 2021 (LifeSiteNews) — The German domestic intelligence agency created a new section last week specifically for surveillance of a small number of people and groups protesting coronavirus restrictions. Other sections include right-wing and left-wing extremism, as well as Islamic terrorism.

“Legitimate protests and demonstrations against COVID policies are repeatedly — and increasingly in more recent times — instrumentalized, and escalations are provoked,” the agency warned. “But also the organizers of demonstrations … show clearly that their agenda goes beyond the mere mobilization of protests against the state’s COVID protection measures.”

According to the agency’s announcment, organizers seek to network with “right-wing extremists,” while “ignoring … official orders is propagated, and ultimately the state’s monopoly on the use of force is negated. Such an approach is both altogether conducive and aims to permanently shake confidence in state institutions and its representatives.”

“Our basic democratic order as well as state institutions such as parliaments and governing bodies have been exposed to multiple attacks since the beginning of the measures to contain the COVID-19 pandemic,” the agency argued, not acknowledging that basic human rights have been suspended for over a year, including the right to work and earn a living, and the right to breathe air without a device that limits the intake of oxygen. The New York Times called the anti-lockdown Germans being surveilled “coronavirus deniers.”

“Democratic decision-making processes and the corresponding institutions of the legislative, executive, and judicial branches are delegitimized and disparaged in ways that threaten security,” according to the Federal Office for the Protection of the Constitution. Meanwhile, numerous restrictions imposed on the public, including strict mask mandates, have been implemented by mere executive orders, as opposed to the people’s representatives voting for actual laws.

“Conspiracy myths such as QAnon or other antisemitic resentments are invoked … Conspiracy theories are an almost universal phenomenon and have a considerable catalytic effect,” the agency warned, without explaining what constitutes a conspiracy theory in the context of protests against lockdowns and other restrictions.

According to tagesschau.de, the domestic intelligence agency is now in a position to officially monitor certain groups and people by “storing personal data, recruiting undercover agents, and, in justified cases, monitoring communications.”

While some protests have indeed turned violent in the past, with a small number of people attacking journalists or police, the vast majority of those protesting the restrictions has been peaceful.

Intelligence agencies on the level of individual states in Germany have set their sights on certain segments of the COVID-related protests for months. Baden-Württemberg in the south-west of the country was the first state do so so in December.

Masks have been mandatory in Germany in many places, including grocery stores and public transportation, for many months. In December, the federal government limited private meetings to five people, at most.

“Every person must wear a face covering in enclosed spaces that are accessible to the public, or in the context of visiting or customer traffic,” the government emphasized. “In addition, the obligation to wear a mouth-nose covering applies in all places with public pedestrian traffic in city centers.”

Nevertheless, the rate of positive tests per week and per population of 100,000 went from roughly 140 in early December to about 190 around Christmas. The so-called incidence rate was subsequently reduced to the high 50s, only to rise again to over 140 in May. Mask mandates and other restrictions remained in place throughout this time, suggesting there is no correlation between mask wearing and the spread of COVID-19. 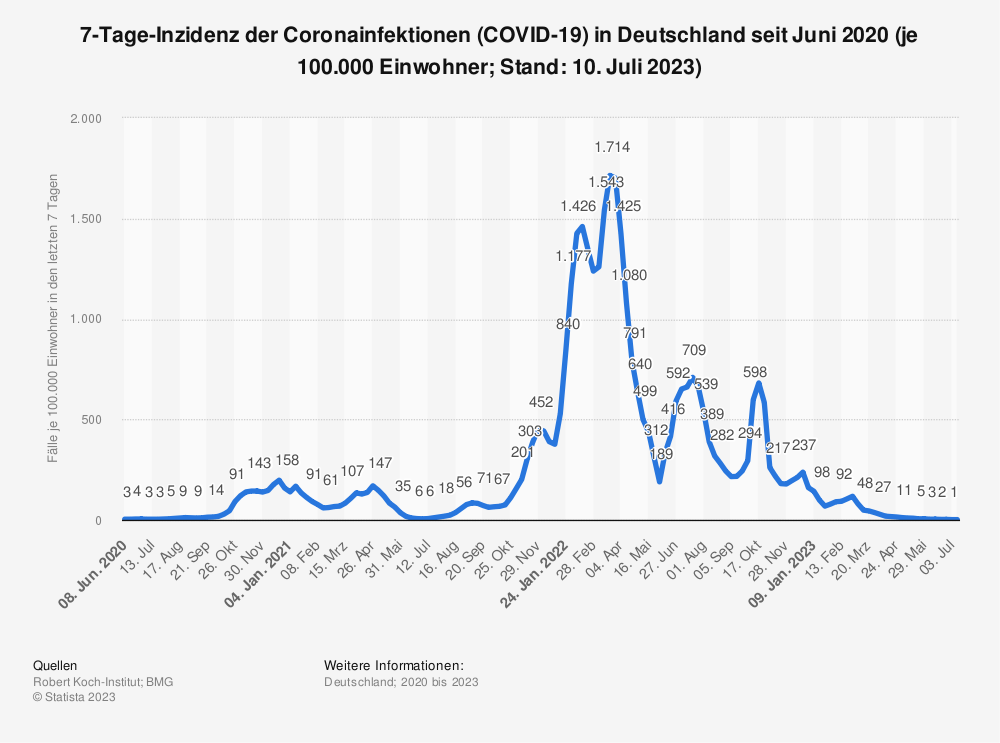 Germany has seen several large protests against COVID-related restrictions. On August 1, about 30,000 citizens flocked to Berlin. On August 29, also in Berlin, police estimated 38,000 people had come to the nation’s capital. A protest in Leipzig last November saw 45,000 people. This year, on March 20, a protest in Kassel was approved for 6,000 citizens. In the end, police estimated up to 20,000 people were present.