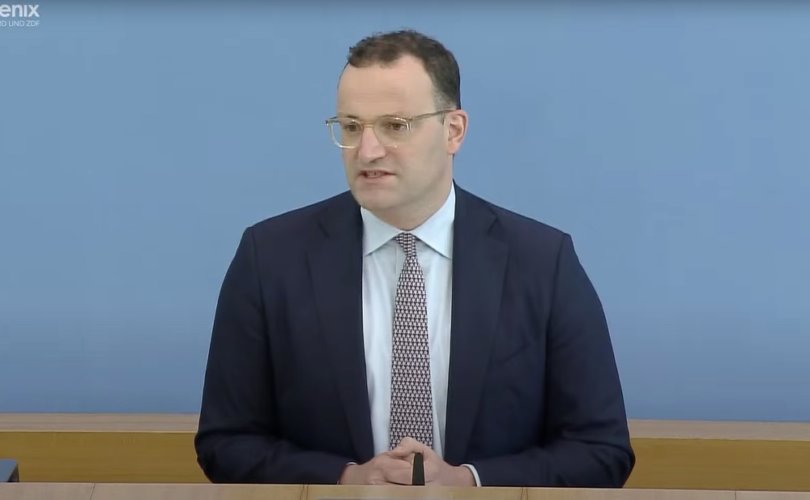 BERLIN, Germany (LifeSiteNews) — Top German officials made multiple comments last month suggesting that vaccinated people in Germany will enjoy “more freedom” than unvaccinated people and implicitly suggested that if a new lockdown were to occur, it would affect only the unvaccinated.

The first comment was made by Braun on July 2 in an interview he gave to German radio news channel MDR during which he discussed the possibility of a new lockdown which he said will depend on the efficacy of the vaccine.

Braun also established a clear distinction between vaccinated and unvaccinated people by stating, “As long as the vaccination works well, a lockdown at the expense of those who are fully vaccinated is out of the question.”

His words were echoed by health minister Jens Spahn at a press conference that also took place on July 2. Spahn told reporters in Berlin, “As long as there are no mutations that impact the protection from vaccines (…), then being fully vaccinated means that restrictions of the kind we saw last winter will not be necessary, needed, or legally appropriate.”

Spahn used similarly divisive language during the last German lockdown in April of this year. Having lifted lockdown restrictions for fully vaccinated people, the German health minister told national newspaper Bild that “anyone who is vaccinated can go to the shop or the hairdresser without further testing.”

Chief of staff Braun echoed this position on July 25 in an interview with Bild:

Braun went on to say that even unvaccinated people who present a negative COVID test will still be denied entry to certain venues such as bars, cinemas, and sporting events.

“If we have a high rate of infection despite our testing procedures then the unvaccinated will have to reduce their contacts,” he said.

“That can mean that certain options like restaurants, cinemas, and visits to stadiums, even for unvaccinated people who have been tested, would no longer be possible, because the risk to everyone else is too high.”

The statement was reminiscent of Boris Johnson’s recent announcement regarding vaccine passports in the UK in which the British Prime Minister stated: “Proof of negative test will no longer be sufficient.”

When Braun was asked whether this was legally permissible, and whether the state could dictate such a measure, he replied:

“Yes! The State has the duty to protect the health of its citizens.”

Angela Merkel’s most senior advisor appeared on a Bild live-show the next day to explain his position further, only to be challenged by his interviewer, who pointed out the blatant contradictions in Braun’s statements.

The show host recalled that the chief of staff had said in March: “Once we’ve offered the vaccine to everyone in Germany, then we can go back to normality in all sectors of society. The ones who do not take this opportunity are making their own individual decision to accept the risk of infection. After this, we can no longer justify any restriction on fundamental rights. We can return to full normality, and all restrictions must go.”

Bild’s reporter then pointed out that, from the end of September, everyone in Germany will have been offered the vaccine and asked why Braun’s previous statement no longer applied.

The chief of staff struggled to explain his change of position and contradicted himself again, claiming to stand 100% by his previous statement while at the same time noting that it presented “two problems,” one of which being the lack of available vaccines for children (a fact which was already established in March when Braun made his statement) and the second being the necessity to reach a level of herd immunity which he estimated at around 80%.

Braun’s interviewer did not fail to point out the irony of making the individual right to opt for vaccination or not dependent on an 80% herd immunity through mass vaccination.

— Article continues below Petition —
PETITION: No to mandatory vaccination for the coronavirus
Show Petition Text
1072906 have signed the petition.
Let's get to 1100000!
Thank you for signing this petition!
Add your signature:
Show Petition Text

Braun’s comments have generated much debate within the German political arena, including in Braun’s own party, the Christian Democratic Union (CDU).

Armin Laschet, the 60-year-old leader of the CDU, reacted in an interview with ZDF, Germany’s national public television broadcaster, by saying: “I don’t believe in mandatory vaccination, and I don’t believe in indirectly putting pressure on people so that they get vaccinated (…). In a free country, freedom rights are not just reserved for specific groups of people.”

The left-wing opposition also showed negative reactions. The Vice President of the Bundestag and member of the Free Democratic Party (FDP) Wolfgang Kubicki, 69, warned that Braun’s initiative could mean “the introduction of compulsory vaccinations through the back door,” adding that “the exercise of fundamental rights cannot be made permanently dependent on ‘good behavior’ that the Chancellery defines as correct (…). The federal government hereby accepts a massive division of society.”

“Such a categorization of basic rights into a first and a second class is clearly unconstitutional,” he said.

There are those, however, who supported Braun’s and Spahn’s view, including Alexander Dobrindt, the 51-year-old leader of the Christian Social Union (CSU) group.

Dobrindt told the Welt newspaper: “Vaccinated people protect themselves and others; that’s why normality is the logical consequence for this group.” He commented further that “this normality for vaccinated people must also be possible when it requires restrictions for the unvaccinated.”

As of July 21, just over 25 million Germans, that is, 31% of the country’s total population, have been fully vaccinated against COVID-19. Overall, 42 million (51%) have received at least their first dose.