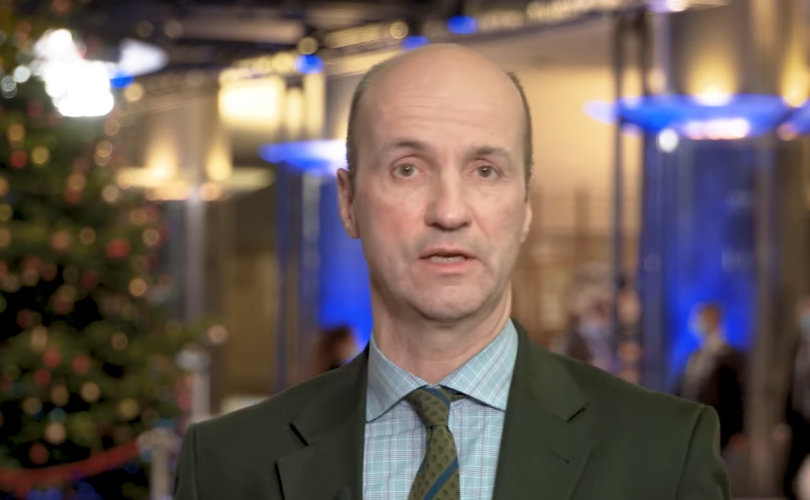 BRUSSELS (LifeSiteNews) — A German Member of the European Parliament (MEP) has demanded an investigation into deaths related to the abortion-tainted COVID-19 shots. He asked that manufacturers be held liable for damages arising from their jabs in a penetrating speech to parliament Monday.

German MEP Nicolaus Fest, a member of the conservative AfD party, addressed the gathered parliamentarians by accusing European governments of lying about their intentions with the widespread inoculation programs against the novel coronavirus.

Whereas leaders had first stated “they only wanted to vaccinate the vulnerable groups,” which he said covers — for the most part — people aged 60 and over, “now they say, no, you have to start at the age of 18.”

“So now we want to vaccinate the entire world,” Fest lamented. “Naturally one wonders why, because up until now the reasons have all been either wrong or misleading.”

The politician said leaders had lied about the level of “vaccine” coverage required before considering the population to have reached herd immunity, first claiming that 70 percent uptake in “vaccination” would suffice to reach the threshold. “Now they say we need 100 percent,” Fest stated.

“The peak of this absurdity is that the unvaccinated are a danger to the vaccinated,” he added, calling into question the justification for the jab rollout based on acting “out of solidarity with vulnerable groups.”

Fest referenced the mounting studies which indicate that the double jabbed carry “a particularly high viral load,” arguing that, contrary to governmental advice suggesting only those who have received the jab should be in close contact with the most vulnerable, for such groups “it is obviously safest if they are visited by unvaccinated people.”

Indeed, Dr. Paul Elias Alexander, Ph.D., a former professor at McMaster University in evidence-based medicine and former COVID pandemic advisor in Washington, D.C., has warned that the current crop of experimental COVID injections opens the risk of carrying increased viral loads, leading him to state that “the vaccinated must not be overlooked as a key source of infection.”

Fest highlighted the occurrence of “vaccine breakthroughs” — those who have contracted the virus following a full regimen of immunization — as further evidence of the failure of the jabs.

Regarding the push for booster shots, Fest said “the newest rationale to be heard here now is, since the first two vaccinations have thus totally failed, we should urgently be vaccinated a third time, with a vaccine that will probably fail just like the last two vaccines did the first time around.”

More pressing still are the deaths linked to use of the experimental shots. “In Germany, we have 48 confirmed cases of deaths that occurred in connection with the vaccination,” Fest said, qualifying that those 48 “are just the cases that were autopsied.”

“Of course, we know that many people who died after a vaccination were not autopsied at all. That means the unreported number is probably many times higher.”

The EU’s adverse event tracking system for newly developed drugs, Eudravigilance, includes a staggering 2,890,000 injury reports on its database following administration of the COVID jabs up until November 20. Of that number, 31,014 deaths have been reported in the days and weeks since receiving the jab.

Eudravigilance does not account for the entire continent of Europe, rather recording only those injuries reported within the 27 European Union member states.

Regarding the 48 deaths which German autopsies have confirmed were caused by the COVID jabs, Fest demanded accountability on the part of the pharmaceutical companies.

“If any company, let’s say Nestlé or Pepsi or any other company, were to put a product on the market and then 48 people were to die from it within a year, we wouldn’t talk about whether we should or should not distribute this product to the world. We would talk about whether or not we should enforce liability on the management.”

Accordingly, Fest “urgently” requested the European Parliament to consider “discussing the [lack of] efficacy of these vaccines and about liability issues for the management of the vaccine manufacturers.”

“I think that’s what this parliament should concentrate on, not on vaccinating the world.”