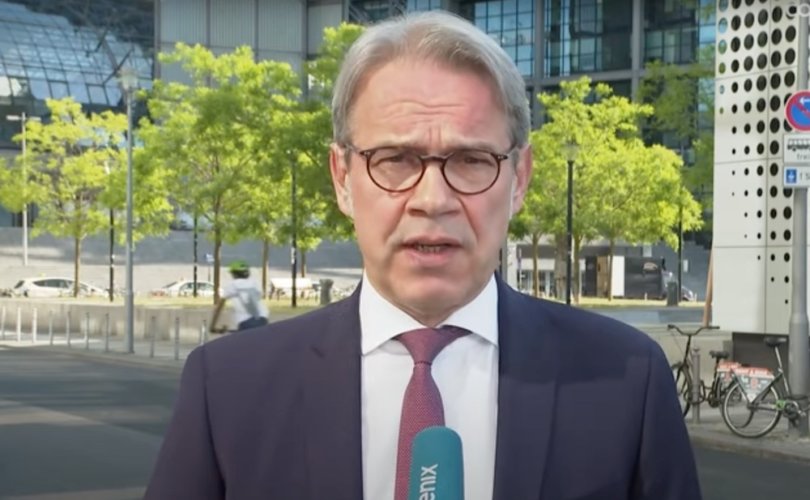 BERLIN (LifeSiteNews)  — A messaging service app popular with those who oppose COVID lockdowns and vaccine mandates has come under attack from German politicians who have accused the service of hosting content that is “indecent” and even “criminal.

“The state has to act quickly against Telegram,” said Georg Maier, the interior minister of the German state of Thuringia on Tuesday, adding that the platform must take action against hate speech.

“If it does not do so, sanctions such as fines must follow.”

These comments came in reaction to reports of alleged violence at anti-COVID-restriction-protests, which are often organized on Telegram groups.

Since then, a number of German politicians and government officials have threatened to take action against it, including Marco Buschmann, the new German justice minister.

Buschmann took to Twitter this week, only a few days after he assumed office, to condemn the messaging service.

“What is brought into circulation on Telegram is not only indecent but, in many cases, also criminal,” he said.

Some have suggested that the recent reports of criminal activity on Telegram appear to be just the opportunity some German politicians have been looking for to obtain leverage against the app. Christian Klingen, chairman and media spokesperson for the Alternative for Germany party (AFD) in Bavaria, said that “[u]nder no circumstances…must the necessary fight against crime be misused as an alibi to prevent citizens from expressing legitimate protest.”.

Klingen published a statement in the AFD magazine in reaction to Buschmann’s comment, saying he sees in them a direct attack on freedom of expression, one of Telegram’s key principles.

“The announcements by the new Minister of Justice do not bode well. They show that the FDP has no intention of defending citizens’ freedom of expression on the Internet,” said Klingen.

“I call on the state government to work at all levels to protect freedom of expression on the Internet. ‘There shall be no censorship,’ says Article 5 of our Law. This also applies on Telegram as well as everywhere on the Internet.,” he added.

Views which go against the mainstream narrative on issues such as COVID-19, the so-called COVID vaccines, and the Great Reset are often referred to as “conspiracy theories” by the media and are being increasingly censored, or even criminalized by being consistently associated with alleged acts of violence, often without any nuance or distinction.

An example of this is a September 22nd Facebook post from German politician, Georg Maier, where he mentions Telegram in connection with “violence” and “incitement to hatred,” in a not-so-subtle attempt to demonize Telegram and some of its users.

“Telegram has become the preferred channel for right-wing extremists, lateral thinkers, and conspiracy theorists. In order to curb hatred and incitement to violence on the internet, there must also be regulatory interventions against messaging services. The Network Enforcement Act provides the legal means to do so,” the post reads.

A recent communiqué from the Federal Office of Cologne even blames Telegram for the role it played in the demonstrations against COVID restrictions.

“Telegram is increasingly being used within certain environments that are currently under surveillance from the Federal Office for the Protection of the Constitution…in particular, by corona sceptics, who use it to propagate their own agenda and mobilize people for demonstrations and rallies,” it said.

But the interior minister of the German state of Thuringia, said that taking action against the social media platform could prove difficult, as Telegram was launched in 2013 by two Russian nationals, Nikolai and Parev Durov as a cloud-based service with data centers distributed all over the world and an operational center based in Dubai.

“It’s complicated because Telegram is not a German company,” he explained. “It’s difficult to get to the responsible parties.”

— Article continues below Petition —
PETITION: No to mandatory vaccination for the coronavirus
Show Petition Text
1081702 have signed the petition.
Let's get to 1100000!
Thank you for signing this petition!
Add your signature:
Show Petition Text

One of the ways that would facilitate the German government’s attempt to take action against the Dubai based app would be to give it the status of a social network, rather than messaging service, which would put it under Germany’s Network Enforcement Act (Netzwerkdurchsetzungsgesetz or NetzDG). This act, which was passed in 2017, aims at combatting the circulation of whatever the state considers to be “fake news” on social networks such as Facebook. This approach was suggested by Maier.

“Telegram is no longer a simple messaging service,” he said, “it has become a social network where demonstrations are advertised, where calls to violence are made, where the addresses of politicians are published. Action has to be taken here.”

The Thuringian interior minister has also called for the controversial geo-blocking of IP addresses from Telegram.

“Within the scope of government action is geo-blocking,” he said. Geo-blocking would make Telegram inaccessible in certain regions of Germany.

Others have suggested much broader action. In his recent tweet, Justice Minister Marco Buschmann said he wished that Germany would not “take a special German path, but rather create a common European legal framework that enables us to take action against hatred and agitation on the Internet.”

More than the expression of a wish for protective measures against dangerous criminals, these recent German threats against Telegram appear to be politically motivated. The ideological motive is becoming increasingly evident based on what is happening in other countries too.

In Austria for instance, mainstream media newspapers have launched a campaign against TV station ServusTV, accusing it of being the preferred TV channel of “anti-vaxxers”, “Gates-conspiracy theorists” and “COVID deniers,” and some say it may soon face censorship from media regulators.

The use of umbrella terms such as “Corona-Leugner” (COVID deniers) is a tool frequently used by both the German and Austrian press to discredit anyone expressing concerns about COVID lockdowns or COVID vaccine adverse events.