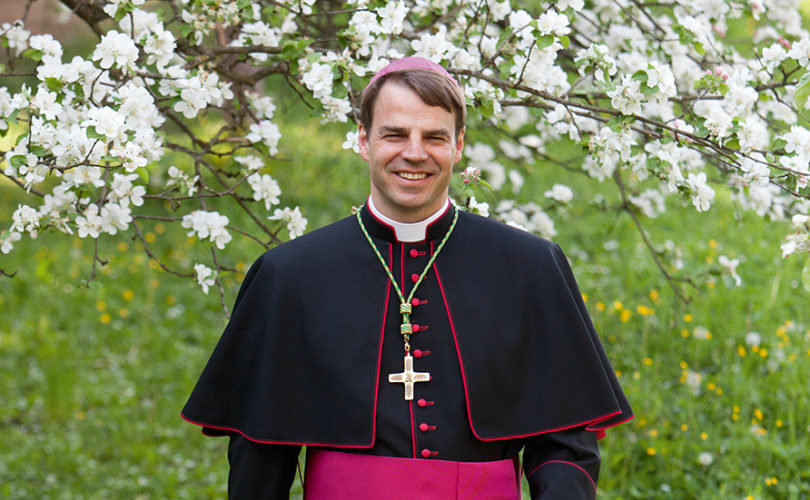 GERMANY, April 12, 2018 (LifeSiteNews) – Last week, seven German bishops raised their voices in opposition to a majority decision of the German Bishops’ Conference to allow, in individual cases and under certain conditions, Protestant spouses of Catholics to receive Holy Communion. These seven bishops sent a letter to Rome asking for clarification. Now Bishop Stefan Oster, of Passau (Bavaria), explains why.

In the April 15 issue of his diocesan weekly newspaper Passauer Bistumsblatt, Bishop Oster says that it is care for the Blessed Sacrament that prompted he and his six fellow bishops to resist the new German episcopal guidelines for intercommunion.

These guidelines are expected to be published soon; the German bishops have already quoted a draft. That draft is available to Bishop Oster, who revealed some details about it in his critique.

“The Eucharist is for us Catholics so important that it essentially expresses our whole understanding of the Faith and of the Church,” Bishop Oster now explains in his statement.

He insists that the letter from the seven bishops comes after an “intensive” and “controversial” discussion during the meeting of the German Bishops’ Conference itself, at which “it was already openly debated whether and how one should turn to Rome for a further clarification of open questions.”

With these words, the Bavarian bishop Oster also indirectly opposes Cardinal Reinhard Marx – the German bishops’ president – who showed himself, in a published letter, to be surprised at the seven bishops’ Letter. Cardinal Marx also then insisted that it is well possible for a national bishops’ conference to “formulate criteria which permit the reception of Communion on the side of Christians who are not in union with the Church.”

In his own statement, Bishop Oster points out that the draft of the German bishops’ new guidelines speaks about “grave spiritual emergency situations” in which Protestant spouses may receive the Holy Eucharist. These emergency situations are now applied to the very fact that the couple of a mixed marriage may not receive Communion together, a fact which, in the eyes of the German bishops, may thereby “endanger that marriage.”

“We wish to receive a clarification as to whether this expansion of the interpretation of grave emergency situations is correct,” Oster now explains. To him, it does not seem a “simple” thing to “share the full Catholic understanding of the Eucharist,” while at the same time remaining in another denomination; and “thus to preserve for oneself, at the same time, that confession's own understanding, let's say of the Last Supper.” Oster does not see how this inner contradiction could – or should – be preserved of holding two different, incommensurate understandings of Holy Communion at the same time.

The Bavarian bishop also points out another weak point in the episcopal draft, namely that, while Protestant spouses may receive Holy Communion, Catholic spouses are explicitly excluded from receiving Protestant communion. The reason for this decision is, according to the draft, that there exist two different understandings of communion. Oster comments: “One assumes that the Protestant spouse somehow is capable of holding both understandings of faith at the same time, but the Catholic spouse not, because they do not fit together. I consider this position to be very difficult to explain!”

Additionally, Bishop Oster raises the question of the “connection between the Eucharist and Confession,” which “has not yet been clarified.”

Pointing to the fact that every First Holy Communicant is required to go to Confession prior to First Holy Communion – “because there exists an inner connection” between these two Sacraments – the German prelate thus says “here we wish a deeper clarification which has not yet been given.” How could the Catholic Church deal “with those faithful of other confessions concerning the Catholic [sacramental] confession in preparation for the Eucharist?” asks Oster.

Bishop Oster also gives caution about the use of the “exception in an individual case” approach in the matter of intercommunion, saying that, in general, the less informed public understands such a rule as a “general permission.” He sees here a “danger of a superficial reception” of the sacramental message and he also wishes to “avoid a banalization of the Eucharist.”

“After all, we rightfully call the Eucharist the Blessed Sacrament,” Oster adds, and it is important in his view “to grapple about the question of how we deal with it in a good manner.”

In conclusion, Bishop Oster stresses that the letter of the seven German bishops – which they sent immediately also to Cardinal Marx for his information – was not about “discrediting other bishops,” but, rather, an urgent desire “to receive a deeper clarification from Rome.”