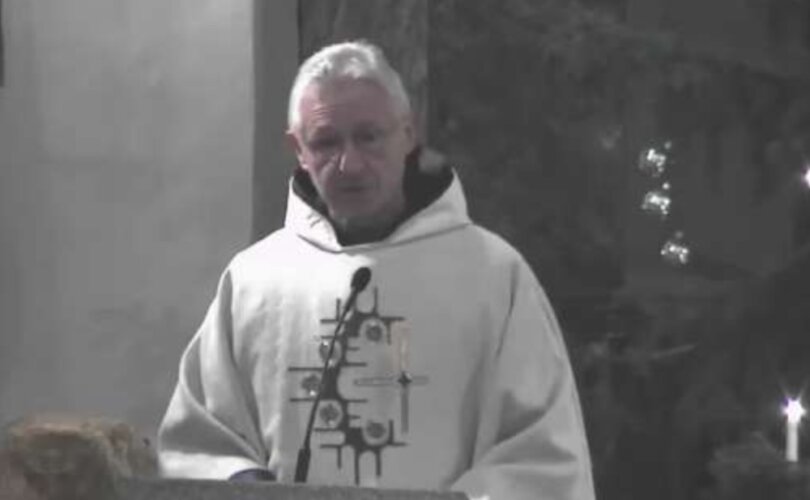 UPDATE: Call to action at the end of the article.

WITTICHENAU, Germany (LifeSiteNews) – A Benedictine priest in Germany was publicly condemned and punished by his abbot and the local bishop for preaching against gender ideology and the heterodox Synodal Way and for defending the traditional family in his Christmas homily.

The abbot of the Benedictine Tholey Abbey, Mauritius Choriol OSB, forbade Father Joachim Wernersbach OSB from performing pastoral activities in the area surrounding Tholey Abbey and announced that the Abbey will commission “an ecclesiastical investigation with an analysis of the sermon text and intercession prayers,” according to katholisch.de.

In his Christmas Eve sermon, which was uploaded on YouTube but later removed, Wernersbach talked about abortion, gender ideology, the traditional family, and the Synodal Way from a faithful Catholic perspective.

“There is much about Christmas that we can derive from for our time today,” Wernersbach said. “Jesus was conceived in the womb, which means life begins in the womb. It is hard to believe that half the people no longer see it that way and instead talk about clumps of cells.”

The Benedictine monk explained that the Holy Family shows us the model for the Christian family. “Family consists of husband, wife, and child,” he stated.

“I especially wish those who believe in the traditional family exceptional joy because they are not swayed by and follow or even pay homage to harmful modern trends.”

“God has recommended to us ways of life that are natural, beautiful, and in harmony with the divine order,” Wernersbach stated, contrasting it with the “strange modern currents” of gender ideology, transhumanism, LGBT, “diversity” and the Synodal Way:

You hear about gender and transgender, transhumanism and reproductive health, wokeness and LGBTQ, diversity and identity. Of multiple genders and gender reassignment, plus this devastating new understanding of revelation from the Synodal Way. My dear friends, even the terms are absolutely disturbing. They all have one thing in common: they lack beauty, they lack coherence, and they lack naturalness. They are not aligned, not in harmony with the inconceivably beautiful Divine Order.

“A great dissonance has befallen our country,” the Benedictine monk continued. “Christ came into the world to resolve this dissonance. He does not want us to end up in an absurd world, in a world that no longer wants to know anything about God.

“The Child Jesus in the manger is calling us: come to me, pick me up, and let me embrace you. I love you like a little child loves its mother. With me, you will find everything that is good, true, and beautiful, that which remains forever and does not disappear again like a fad. I give you fellowship with me here on earth and later in heaven.”

“And therefore, my dear friends, do not let yourselves be misled by all the nonsense that people are trying to persuade us to believe, and which in the end does not represent any perspective at all,” Wernersbach said. “Let us rest calmly in the certainty that we have God on our side.”

— Article continues below Petition —
Tell Pope Francis that Fr. Frank Pavone's laicization must be overturned
Show Petition Text
46223 have signed the petition.
Let's get to 50000!
Thank you for signing this petition!
Add your signature:
Show Petition Text

According to katholisch.de, Tholey Abbey responded to Wernersbach’s sermon by saying that “they expressly reject the image of man drawn by him in it and the statements made there about the history of creation. We regret the anger, suffering, but also consternation caused by it.”

“The evaluations made by our confrere lack pastoral empathy and not only contradict the reality of society, but in many ways discriminate against large segments of society, for instance when it comes to the view of women, to the understanding of family, and regarding queer human beings and the LGBT community.”

However, the abbey seemed to admit that Wernersbach’s sermon was in accordance with Catholic teaching. They added that they made their critique “regardless of valid Catholic doctrine.”

For this monastery, the well-known statement of Pope Francis on the subject of homosexuality – “Who am I to judge?” – is the standard for dealing with all people, katholisch.de reported.

READ: Evidence of a trail of wreckage from Pope Francis’ ‘Who am I to judge?’

After Wernerbach’s Christmas sermon got attention on social media, two women started a petition expressing their displeasure with the priest’s statements. The petition gained over 500 signatures and is now closed according to katholisch.de.

One of the initiators of the petition, Theresia Kliemank, also admitted that Father Wernersbach’s sermon reflected the official teachings of the Catholic Church for the most part but said that “nevertheless, these statements have no place in a Christmas Mass.”

Bishop Wolfang Ipolt of the local diocese of Görlitz also condemned Wernersbach’s Christmas sermon, while acknowledging, like the abbey and the initiator of the petition, that the sermon was in accordance with Catholic teaching.

“Fr. Joachim has undoubtedly made rash and irresponsible statements. This has offended the faithful and led to a petition to the parish council of the parish,” Ipolt told katholisch.de.

He said there is no reason to talk about the Church’s sexual morality or to be critical of individuals’ lifestyles in a Christmas service.

Ipolt emphasized that the questions addressed by Wernersbach are currently being discussed both within and outside the Church; therefore, they belong in the discourse among Christians and must be illuminated from the perspective of the Gospel. According to Ipolt, the talks at the Synodal Way also showed that there was a need for discussion here. “But the sermon is not the right place for this,” the German bishop said.

Ipolt said that he invited Wenrnersbach to a personal meeting and stressed that the Benedictine monk should apologize for some of the “hurtful or ambiguous statements” made in his sermon.

LifeSiteNews encourages readers to pray for Father Joachim Wernersbach OSB, a good and faithful monk. In addition, concerned readers may direct their polite requests to his abbot and his bishop that Fr Joachim be permitted to continue his ministry :