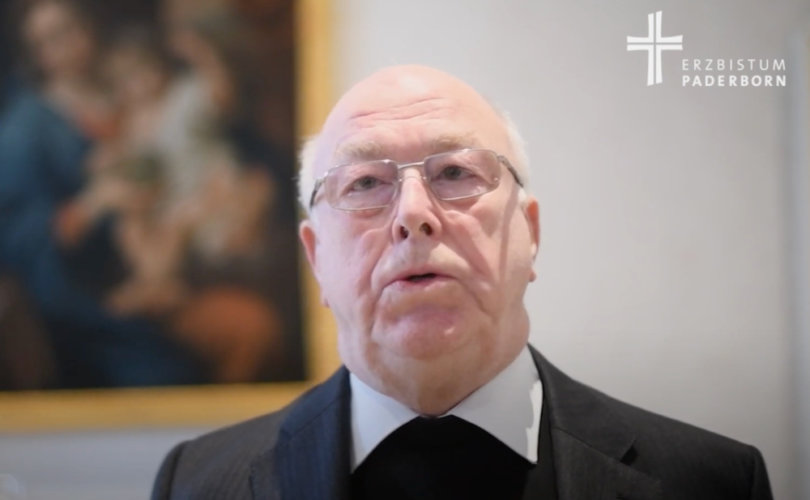 (LifeSiteNews) — A group of priests in Germany has protested the use of abortion-tainted COVID injections and the Archbishop of Paderborn’s decision to use the cathedral as a vaccination center, calling for German prelates to “finally fight for the life and freedom of the unborn.”

The group, “Communio veritatis,” published its note of protest November 30, in response to a declaration by Archbishop Hans-Josef Becker of Paderborn, in which he linked COVID vaccination to freedom.

“If you want life and freedom, get vaccinated. This is the order of the day for the protection of oneself and others, for living charity,” Becker wrote. The 73-year-old archbishop announced Paderborn cathedral would be used as a center for distributing the abortion-tainted COVID injections in December.

Becker was echoing a statement issued by the Permanent Council of the German Bishops’ Conference, which stated that vaccination was “an obligation out of justice, solidarity and love of one’s neighbor,” and a “moral duty.”

“We emphatically call on Catholics and all people in our country to be vaccinated as far as possible,” declared the council.

The priests’ group responded strongly: “We reject this call!”

“How can receiving a ‘vaccination,’ for the creation of which cell lines of aborted children were used, be an act of charity?” questioned the group, formed in light of the 2018 debate in Germany about giving Holy Communion to some Protestant spouses of Catholics.

Quoting from the research presented by laboratory physician Prof. Dr. Paul Cullen — whose account has been corroborated by vaccine manufacturers and pro-life researchers — the priests noted that aborted fetal cells were used “in all vaccines against the coronavirus currently available in Germany,” either in production of testing. “In using such vaccines, one benefits from and at least implicitly supports a ‘structure of evil.’”

Referring also to the teaching of Pope John Paul II in his 1995 encyclical Evangelium vitae, the priests reminded Becker how using unborn babies “as experimental subjects is a crime against their dignity as human creatures.”

As such, the group, founded in 2018, issued their rallying call for vocal leadership from the German hierarchy on the pro-life issue.

“Against this background, we would like to emphasize what is truly an imperative of the hour: that the German head pastors finally fight for the life and freedom of the unborn and clearly raise their voices in protection against the despicable crime of abortion!”

“Every year a large city is wiped out in our country,” they stated. “The blood of the millions of children killed cries out to heaven for retribution! How can bishops remain silent in the face of the diabolical agenda from the European Parliament that promotes abortion as a human right?”

Such a public defense of the unborn on the part of the episcopate would involve Becker walking back his promotion of the abortion-tainted injections, as the priests declared they “strongly oppose the abuse of holding a vaccination campaign in Paderborn cathedral.”

“Instead, we embrace St. John’s advent call to repentance,” they urged.

Decrying Becker’s decision as “unacceptable,” the priests reminded the archbishop that “it is part of the essence of Protestantism not to share the full Catholic belief in the Holy Eucharist.”

Some months later, the group issued a call for Cardinal Reinhard Marx, then president of the German Catholic Bishop’s Conference, to resign, saying that he used Catholicism “in order to spread the left-liberal political ideology of the mainstream.”

“We reject the instrumentalization of our religion,” they declared, adding that he was promoting “syncretism and relativism” instead of Catholic doctrine, and “abusing [his] spiritual office by obviously considering the Church’s Sacraments as [his]personal property.”

Led by its head, Fr. Frank Unterhalt of the Archdiocese of Paderborn, the group entered the public debate again earlier this year, by rebuking Bishop Georg Bätzing, the current head of the German bishops’ conference, and the number of German bishops who rejected the Vatican’s ban on blessings for same-sex couples.

Bishop Bätzing declared that he was “not happy” with the Vatican’s decision, saying that “the theological inquiries about pastoral practice today cannot simply be put out of the way with one word of power.”

“You are tearing apart the Body of Christ by disregarding the Word of God and falsifying the teachings of His Church,” the priests wrote in response. “You are driving the flock into the abyss of your Synodal Path. You are killing the sheep because you are spreading heretical deceit.”