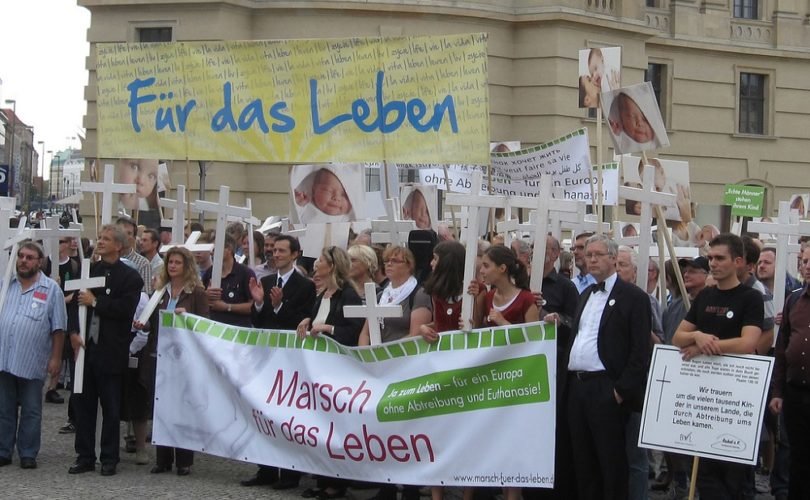 BERLIN, Germany, September 9, 2016 (LifeSiteNews) — The “Evangelische Kirche Berlin-Brandenburg-schlesische Oberlausitz” (Protestant Church) of Germany (EKBO) is dissuading its faithful from participating in the “March for Life” on September 17, when thousands of Christians, Catholics, and evangelicals gather in Berlin for a traditional silent demonstration for life.

While the event culminates with an ecumenical prayer service, spokesman Christoph Heil is distancing the EKBO from the March. He explained to the Protestant news agency, Idea, that the reason is “differences of opinion” and the allegedly “aggressive manner” of the protestors. He said the Evangelische Kirche supports pregnancy counsel that is “open ended.”

The EKBO, which is headquartered in Hanover and includes 20 Lutheran and reformed churches in Germany, previously discouraged its members to participate in the March in 2014.

Martin Lohmann, president of the Federal Association for the Right to Life, shared with LifeSiteNews his surprise regarding the EKBO’s decision. “You cannot believe your eyes and just don’t want to believe it: representatives of the Protestant Church in Berlin-Brandenburg set themselves against the protection of life and pursue evidently left-wing hate slogans. Has the Church in the German capital really said goodbye to the Word of God? Does she only want to be in the socio-political mainstream? Does she really wave a ‘bye-bye’ Jesus to the Son of God?”

Last year, the March for Life brought together about 7,000 Christians of all denominations to remember the 100,000 abortions that take place every year in Germany. This year, participants will meet in front of the Reichstag, the German parliament, and walk for 5 kilometers carrying banners through the inner city center of Berlin.

“How does one get the absurd idea to defame peace-loving and decent pro-lifers who try to be faithful to the divine precepts and who follow the law? I pray that these confused people who don't even live the basic rules of fairness and who prefer to retreat behind clichés may open their eyes and ears,” Lohmann said of the EKBO leaders who discourage members from participating.

In an official statement last year, organizers of the March for Life stated their core principles: the right to life for every human being, born and unborn; and the equal dignity of all human beings regardless of development, capacity, and circumstance. Also, the state must safeguard the life of every individual from the moment of conception, and the right to life is independent from the decisions of third parties.

Hartmut Steeb, chairman of Christian Pro-Life groups and the representative of non-Catholic Christians, had a “horrified” reaction upon hearing the EKBO decision. “Human life is under the protection of God from beginning and a church cannot stand for anything but a definitive ‘yes’ to the child,” he said. Steeb is also the general secretary of the German evangelical alliance that supports the march.

Every year, the march faces massive counter-demonstrations by left-wing extremists and pro-abortion activists. Anti-riot police officers are present to protect the peaceful protesters, who consist of families, children, and senior citizens. Approximately 1,000 officers had to be mobilized last year to guarantee the safety of the protestors. The march came to a halt on multiple occasions for up to half an hour at a time while police cleared seated blockades of people from the street. The police had to carry counter-protestors away who were screaming slogans — “My body, my decision!” “free heads from fundamentalism!” and “If Mary had aborted, we would have been spared you!” — while spitting and throwing trash at the silent, peaceful participants of the March.

Counter-demonstrators are supported by the Green party, the “Linke” – the left wing party of Germany – as well as the ruling mayor of Berlin, Michael Müller (SPD).

“No Christian should take the side of hate-preachers and intolerant, odious people who apparently cannot even stand a silent testimony of the message of life and for the right of life to be protected,” Lohmann said.

“What has been said was most of all unchristian. Since I have no fear of dialogue or even of being contradicted, I invite (Protestant) Bishop (Markus) Dröge and his spokespeople to a discussion. I would like to know which arguments they have for their absurd claims. For insults not restricted to only the Christian pro-lifers who are peace-loving and tolerant, they should give an apology, which I will be very happy to accept.”

This year, organizers expect participants from 36 cities across Germany and Regensburg Bishop Rodolf Voderholzer as only participating diocesan bishop.