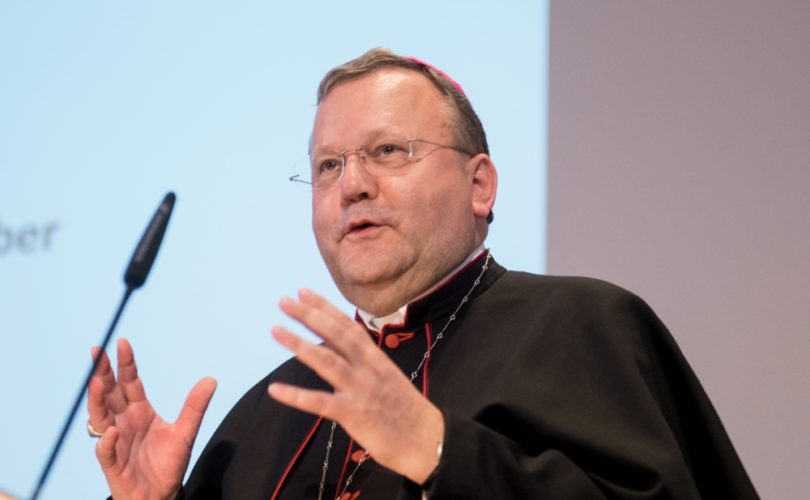 September 15, 2015 (LifeSiteNews) – A German bishop slated to attend next month’s Synod on the Family is again stoking controversy after suggesting the Church should offer a “private blessing” for same-sex unions, and that an adulterous relationship could be more in keeping with the Catholic vision of marriage than an actual sacramental marriage.

Bishop Franz-Josef Bode, one of the three German delegates for the synod, made those remarks in an interview with the German Catholic news agency KNA.

While he repeats in this interview the traditional teaching on the indissolubility of marriage, the German bishop claims at the same time that people can “come to a new relationship which is more mature than the first [relationship], but which does not have the same sacramental value.” He then raises the question as to whether “this new reality – which perhaps corresponds in a better way than the first [relationship] to the Covenant of God with men – always has to have as a consequence the exclusion from [the Sacraments of] Confession and Communion.” He thus questions whether “remarried” couples may, after all, not be admitted to the Sacraments without changing their way of life.

The German Catholic pro-life activist and author of several books, Mathias von Gersdorff, criticized Bode’s statement. “What Bishop Bode says here is simply horrifying and even absurd; a relationship before, next to, or after a marriage has no “sacramental value” at all,” he wrote. “It is simply sinful. It can also not be more mature, since it violates the Commandments of God. To say that it [such a new bond] could be ‘more in accordance with the Covenant of God with men,’ is nearly blasphemous.”

Also in the KNA interview, after again first repeating a part of the teaching of the Catholic Church – namely, that homosexual couples are not to be unjustly discriminated against – he then proceeds to claim that it is important to see in such unions, “just as in couples who live together before marrying,” the “strengths and not only their weaknesses and deficiencies.” While Bode proposes that the Church accompany such homosexual couples in a “positive way” and assist them, he states that they will, nevertheless, not result in “something that would be equal to a marriage.” Bode continues: “But, with prayers and a private form of a blessing, one will be able to accompany them on their way.”

Earlier this year, Bode had caused another controversy when he stated that the Church should take more into account the “life realities” of people and even consider them – these actualities – as a third source of revelation – next to Holy Scripture and Sacred Tradition. This claim provoked strong criticism by two prominent Church leaders, Cardinal Paul-Josef Cordes and Cardinal Kurt Koch.