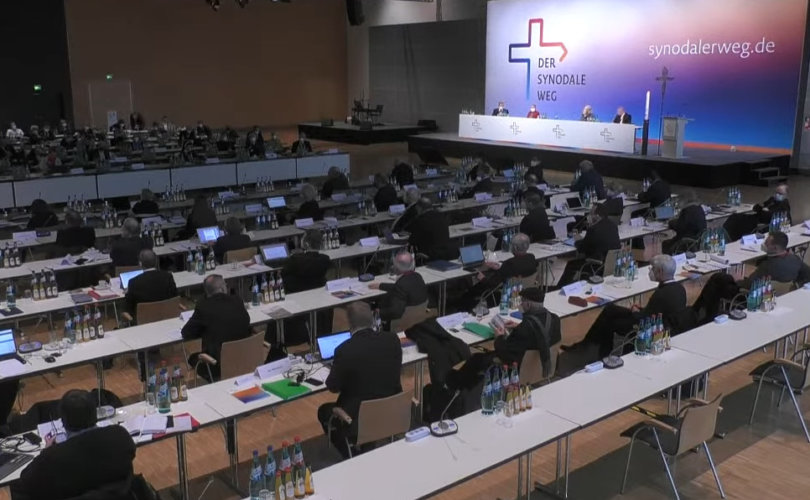 FRANKFURT, Germany (LifeSiteNews) — An overwhelming majority of participants in the German Church’s Synodal Path have voted in favor of both the blessing same-sex couples and the ordination of women.

The preliminary votes took place during two meetings on Friday and Saturday. The final votes are expected to take place in the fall.

The participants voted Friday on a document entitled “Women in Ministries and Offices in the Church.”

The text argued that “it is not the participation of women in all church ministries and offices that requires justification, but the exclusion of women from sacramental office.”

According to CNA Deutsch, the text was passed by 174 votes in favor, 30 against, and 6 abstentions.

The text represents a direct contradiction to the Church’s teaching on the priesthood. As Pope John Paul II definitively reiterated in his apostolic letter Ordinatio Sacerdotalis, women cannot be ordained priests. The Church “has no authority whatsoever to confer priestly ordination on women and that this judgment is to be definitively held by all the Church’s faithful.”

This teaching was reaffirmed by Pope Francis during an in-flight press conference in 2016.

“As for the ordination of women in the Catholic Church, the last clear word was given by St. John Paul II, and this holds,” Francis said.

On Saturday, the participants in the Synodal Path voted in favor of two documents advocating for the blessing of same-sex couples.

The documents, entitled “Blessing celebrations for couples who love each other”  and “Magisterial reassessment of homosexuality” respectively, both received an overwhelming majority of favorable votes.

The second document in particular calls for a revision of passages 2357–2359 and 2396 of the Catechism of the Catholic Church (CCC) on homosexuality and chastity.

The Catechism teaches that “homosexual persons are called to chastity” and that “by the virtues of self-mastery that teach them inner freedom, at times by the support of disinterested friendship, by prayer and sacramental grace, they can and should gradually and resolutely approach Christian perfection.”

According to the participants, this passage of the CCC, as well as section 2396, which lists homosexual acts as sins gravely contrary to chastity, should be revised as part of a “re-evaluation of homosexuality.”

This comes only two weeks after more than 100 employees of the Catholic Church in Germany, including priests, have come out as LGBT in a documentary aired on German public television.

The Synodal Path is a highly controversial movement within the German Catholic Church which was launched by the bishops in 2019. The movement is bringing together Germany’s bishops and laypeople with a view to change the Church’s teachings on priestly celibacy, the role of women, and sexual morality.

The Synodal Assembly consists of the bishops as well as members of the powerful lay Central Committee of German Catholics (ZdK), and some other members. Only a small minority of bishops and other participants defends traditional Catholic teaching.

The movement has been condemned by a number of high-ranking church officials. Some argue that Synodal Path poses a real threat of schism in the German Church.