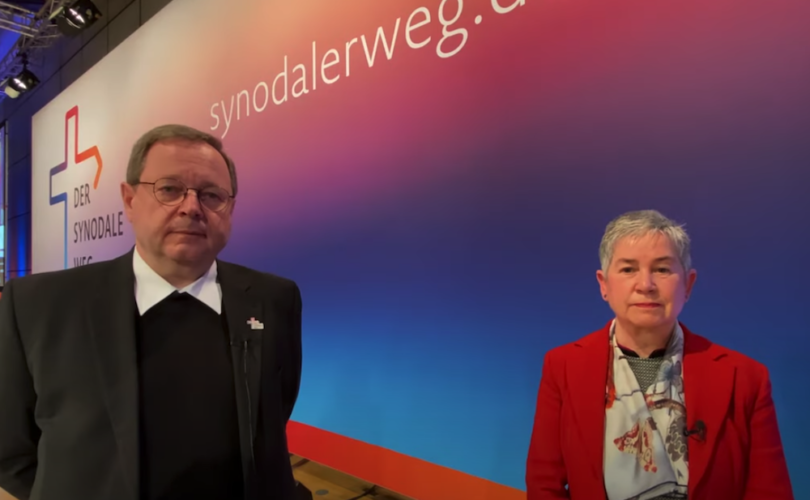 FRANKFURT AM MAIN (LifeSiteNews) – At the fourth Assembly of the German Synodal Way, a large majority of the bishops and laity present voted to approve a text that demands the Church change her teaching on homosexuality.

Entitled “Magisterial reassessment of Homosexuality,” the document includes the following statement: “Same-sex sexuality – also realized in sexual acts – is thus not a sin that separates from God, and it is not to be judged as intrinsically evil.”

The fourth Assembly of the German Synodal Way was held from September 8-10, 2022, in Frankfurt am Main, Germany. The Synodal Assembly consists of the 56 German bishops, 69 representatives of the lay organization “Central Committee of German Catholics,” and several other members of clergy and laity. For a text to be approved, a majority of the members of the Assembly, as well as a two-thirds majority of the bishops, is needed.

Forty of the 56 German bishops (71%) voted in favor of the text that proposes a change to Church teaching on homosexuality. The document is meant to be submitted to Pope Francis and into the worldwide synodal process.

The text addressing homosexual acts is contrary to Catholic moral teaching and the natural law. The Catechism of the Catholic Church states:

Basing itself on Sacred Scripture, which presents homosexual acts as acts of grave depravity (Cf. Genesis 19:1-29; Romans 1:24-27; 1 Corinthians 6:10; 1 Timothy 1:10), tradition has always declared that “homosexual acts are intrinsically disordered.” (Congregation for the Doctrine of the Faith, Persona humana, 8). They are contrary to the natural law. They close the sexual act to the gift of life. They do not proceed from a genuine affective and sexual complementarity. Under no circumstances can they be approved. (CCC 2357.)

The document of the Synodal Way calls for a change of this and other related paragraphs in the Catechism, saying:

In the course of this reassessment of homosexuality, among other things, the passages 2357-2359 and 2396 (homosexuality and chastity) of the Universal Catechism should be revised. Likewise, the corresponding passages in the Catechism Compendium (2005; no. 492) should be amended. In the Compendium, “homosexual acts” need to be removed from the list of “principal sins against chastity.”

The German text concludes that no one should be denied the sacraments, including the sacrament of ordination, because of their homosexual orientation.

— Article continues below Petition —
PETITION: We won't give any money to liberal bishops who attack the Faith
Show Petition Text
11461 have signed the petition.
Let's get to 12500!
Thank you for signing this petition!
Add your signature:
Show Petition Text

The magisterium has consistently taught that men with homosexual tendencies are not to be admitted to the priesthood or holy orders. An instruction from the Congregation for Catholic Education in 2005, which was approved by Pope Benedict XVI, states:

In the light of such teaching, this Dicastery, in accord with the Congregation for Divine Worship and the Discipline of the Sacraments, believes it necessary to state clearly that the Church, while profoundly respecting the persons in question, cannot admit to the seminary or to holy orders those who practice homosexuality, present deep-seated homosexual tendencies or support the so-called “gay culture”.

Another document approved by the Synodal Way calls for a change in how the Catholic Church in Germany as an employer treats employees who live a lifestyle contrary to Catholic doctrine. For instance, they propose that living in an openly homosexual relationship should not bar someone from working for the Catholic Church.

On the first day of the assembly, the progressive forces keen on changing Church teaching suffered a setback as a key document was unexpectedly rejected by a significant blocking minority of bishops. These 21 German bishops had voted in a secret ballot against a document that aimed at changing the Church’s moral teaching on homosexuality, contraception, and gender identity.

Following their disappointment, the progressivists dominating the German Synodal Path were shocked and spoke of “disaster” and “treason.” They complained that some bishops were “secret blockers” who did “not say openly what they think.”

Following the result of this vote, the head of the German Bishops’ Conference, Bishop Georg Bätzing, attempted to put pressure on the dissenting “secret blockers” by removing the secret ballot and replacing it with a show of hands. This may explain why, despite the initial reluctance to demand a change to Church teaching, a majority of the “blockers” ceased to resist.