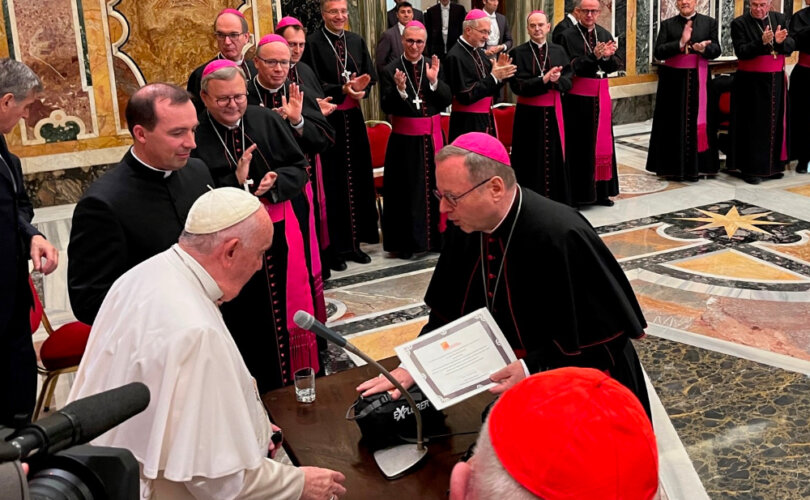 Bishop Bätzing presents Pope Francis with a donation for the homeless and refugee aid of the Vatican. Nov. 17, 2022.Deutsche Bischofskonferenz/Matthias Kopp

VATICAN CITY (LifeSiteNews) — The president of the German Bishops’ Conference told reporters on Saturday that he was “encouraged” by their meeting with Pope Francis, adding that Germany’s Synodal Way wants “to be Catholic differently.” The German bishops refused a request from the Vatican to place a temporary “moratorium” on their national Synodal Way, and also took renewed aim at the ban on female “ordination.”

Bishop Georg Bätzing made his comments at a press conference November 19, which marked the close of the highly anticipated ad limina visit of the German Catholic Bishops’ Conference (DBK), normally made every five years.

Not having made such a visit since November 2015, the various meetings – as expected – were dominated by discussion of Germany’s controversial Synodal Way, which promotes contraventions of Catholic teaching on topics such as homosexuality, female deacons, and contraception.

“This was a challenging visit,” Bätzing stated. However, he highlighted their meeting with Pope Francis as a mark of potential support for the Synodal Way. Their papal audience “encouraged us,” said Bätzing.

Noting that the “different positions within our Bishops’ Conference were presented,” Bätzing said that Pope Francis stated “tension is necessary.” Bätzing continued:

He also spoke of the tension he experiences and the fact that courage and patience are needed to find a solution. Our discussions in Rome were tough but civil and we sensed that dialogue can – and indeed did – succeed in this way.

The Pontiff had been due to take part in the Curial meetings on Friday, following his Thursday meeting with the DBK. However, the surprise announcement that he would not take part was seen by Bätzing as a positive sign.

“The Pope is a clever Jesuit,” said the bishop of Limburg. “He let us wrestle among ourselves as brothers.”

The bishops also met with a number of Curial heads from numerous Dicasteries, including those of the Secretariat of State and the Congregation for the Doctrine of the Faith (CDF). While the meeting with Francis was, reportedly, somewhat supportive of the German bishops, they faced a more stern approach from the Dicastery heads.

Bätzing made a lengthy address defending the Synodal Path, downplaying suggestions of a “schism,” and instead saying the process was in search of “a better Catholic Church that is alive out of the sacramental dimension.”

Addressing gate assembled Curial officials, Bätzing said the recently released continental document for the Synod on Synodality – promoting inclusion of the divorced and “re-married,” LGBT groups, and a “female diaconate” – was an implicit mark of support for the German Synodal Way. “The Roman working document for the Synod makes it clear that the Synodal Path of the Church in Germany is to be understood as part of a synodal dynamism that has taken hold of the whole Church,” he stated.

A joint statement from the Vatican and the DBK, issued after the meetings late on Friday night, outlined the tense nature of the meetings between the German bishops and the Vatican Dicasteries, which had been led by Cardinal Pietro Parolin, Vatican Secretary of State. The statement noted that Parolin highlighted the Synodal Way’s dangers, including the danger of it making a “reform of the Church, and not in the Church.”

Meeting with Curial officials at #Vatican this week, Germany’s #Catholic bishops refused to pause the country’s @DerSynodaleWeg Synodal Way. But Cdl Parolin warned against “reforms of the Church and not in the Church.”
Both sides to now continue “mutual listening and dialogue.” https://t.co/Ww4l2pFkfs pic.twitter.com/SNeIjSw582

Cardinals Ladaria Ferrer and Marc Ouellet – prefects of the CDF and of the Dicastery for Bishops respectively – “spoke frankly and clearly about the concerns and reservations regarding the methodology, content and proposals of the Synodal Way, proposing, for the benefit of the unity of the Church and its evangelizing mission, that the requests that have emerged so far be included in the Synod of the universal Church.”

However, despite an initial show of force rebuking the DBK and the German Synodal Way, the joint statement added “there was a full awareness on the part of all that they are on a journey with the entire holy and patient People of God, even in the confrontation between different positions.”

The statement referenced also “the awareness of the inaccessibility of certain topics.”

Notably, the German bishops refused to consider the Vatican’s suggestion that the Synodal Way be paused, and the statement added that “mutual listening and dialogue” would continue, in order to “contribute to the enrichment of the German Synodal Way and the universal Synod of the Church.”

German church forging its own path

It is as yet unclear how such “listening and dialogue” are to be effective, given that Bätzing hinted he and his fellow heterodox bishops in the DBK have their sights set on undermining the Catholic teaching on female “ordination” and homosexuality.

READ: Record numbers of German Catholics are leaving the Church amid ‘Synodal Way’

He stated on Saturday that the Church in Germany “wants and must give answers to those questions that the faithful ask,” and that Catholics in Germany are “very impatient, they are not patient.” This, for example, has a direct bearing on the issue of female “ordination,” for while it is directly prohibited by the Vatican, Bätzing argued that the question is still open in the Synodal Way.

— Article continues below Petition —
Stand with faithful Archbishop Timothy Broglio as the NEW President of the United States Conference of Catholic Bishops!
Show Petition Text
8661 have signed the petition.
Let's get to 9000!
Thank you for signing this petition!
Add your signature:
Show Petition Text

“But the question exists and it must be elaborated and discussed,” he said.

Despite Bätzing’s statement that “we are Catholic and we will remain Catholic,” he added the clarification that “we want to be Catholic differently.” This remark has already merited condemnation from faithful Catholics, with Tyler’s Bishop Joseph Strickland writing “if they don’t want the truth the Church teaches they are free to reject it as so many have but you can’t reject Catholic & embrace Catholic all at the same time.”

At least Bishop Baetzing admits they are seeking some sort of alternate Catholicism. There is no such thing. If they don’t want the truth the Church teaches they are free to reject it as so many have but you can’t reject Catholic & embrace Catholic all at the same time. https://t.co/GlAUI2kMcn

The U.K.’s Deacon Nick Donnelly echoed this sentiment, stating “All heretics want to be Catholic in a different manner.”

READ: Over 70 bishops warn German bishops that ‘Synodal Path’ will lead to ‘schism’

However, with the German bishops refusing to pause it, and the Vatican refusing to any more forceful action than “mutual listening and dialogue,” the Synodal Way looks set to continue its current divergence from the Catholic faith unabated.