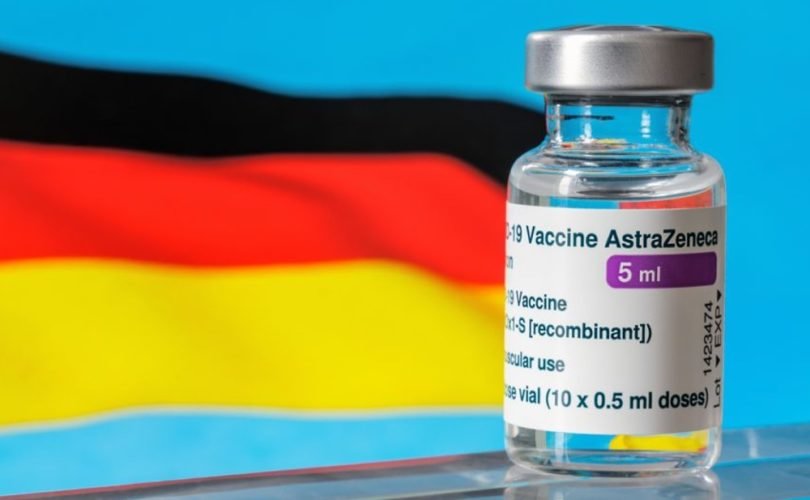 March 31, 2021 (Children’s Health Defense) – Authorities in Munich and Berlin today suspended the use of AstraZeneca’s COVID vaccine for those under 60 after Germany’s vaccine regulator reported 31 cases of a rare brain blood clot, nine of which resulted in deaths, ABC News reported.

All but two of the cases involved women 20 to 63 years old, according to the Paul Ehrlich Institute.

The decision was made as a precaution ahead of a meeting scheduled for later today with representatives from all of Germany’s 16 states, said Berlin’s top health official, Dilek Kalayci, who also said further recommendations are expected to be made by national medical regulators.

Kalayci said the suspension of AstraZeneca vaccines for younger people was a precautionary measure and that people needed to “treat it carefully and wait for the talks taking place at the federal level.”

Earlier Tuesday, two state-owned hospitals in Berlin announced they had stopped giving AstraZeneca’s COVID vaccine to female staff 55 years old and under, and heads of five university hospitals in western Germany called for a temporary halt to the vaccine for all younger women, citing the blood clot risk.

According to ABC News, German news agency dpa International quoted a spokesman for Munich who said the suspension of AstraZeneca vaccinations for people younger than 60 would last “until [the] issue of possible vaccine complications for this group of persons has been resolved.”

This is not the first time Germany has suspended AstraZeneca’s vaccine. Several European governments, including Germany and France, initially limited the shot to people under the age of 65 due to neurological problems reported in a U.K. trial participant.

As reported today, health officials in Canada suspended the AstraZeneca COVID vaccine in people aged 55 and under following concerns the vaccine might be linked to rare blood clots.

Health Canada updated its recommendations amid new data from Europe suggesting the risk of blood clots is now potentially one in 100,000 — much higher than the one-in-1 million risk stated before. The advisory committee recommended the shot be suspended for younger groups pending the outcome of a detailed risk-benefit analysis the agency demanded from AstraZeneca.

Earlier this month, more than 20 countries, including Germany, suspended use of the AstraZeneca vaccine after reports of rare blood clots in the brain, some resulting in death, in healthy people who received the vaccine.

Institute officials said the European Medicine Agency (EMA) should decide “whether and how the new findings will affect the approval of the vaccine.”

After a review by medical experts, the EMA concluded the Oxford-AstraZeneca vaccine “may be associated with very rare cases of blood clots,” but the benefits of the vaccine outweighed the risks and countries should continue to use it. Most European Union (EU) countries, including Germany, resumed use of the vaccine.

That same week, two independent research teams in Norway and Germany announced they had identified antibodies associated with the immune response that caused the type of blood clots experienced by some people who received AstraZeneca’s vaccine. As a result, France, Denmark, Norway, Sweden and Finland did not lift their restrictions on the vaccine’s use.

— Article continues below Petition —
PETITION: No to government and corporate penalties for refusing COVID-19 vaccine
Show Petition Text
102435 have signed the petition.
Let's get to 125000!
Thank you for signing this petition!
Add your signature:
Show Petition Text

Finland and Sweden have since restricted the AstraZeneca vaccine to people 65 and older, while France resumed vaccination in people over 55. All three countries maintain the suspension for all other age groups, while Norway has delayed a decision on whether to resume using AstraZeneca’s vaccine for another three weeks.

Although AstraZeneca’s vaccine has been authorized for use in the EU, it has not yet received Emergency Use Authorization (EUA) in the U.S. The company plans to apply for EUA in the upcoming weeks. If approved, AstraZeneca would become the fourth available vaccine in the U.S., joining Moderna, Pfizer and Johnson & Johnson.

31 reasons why I won’t take a COVID vaccine