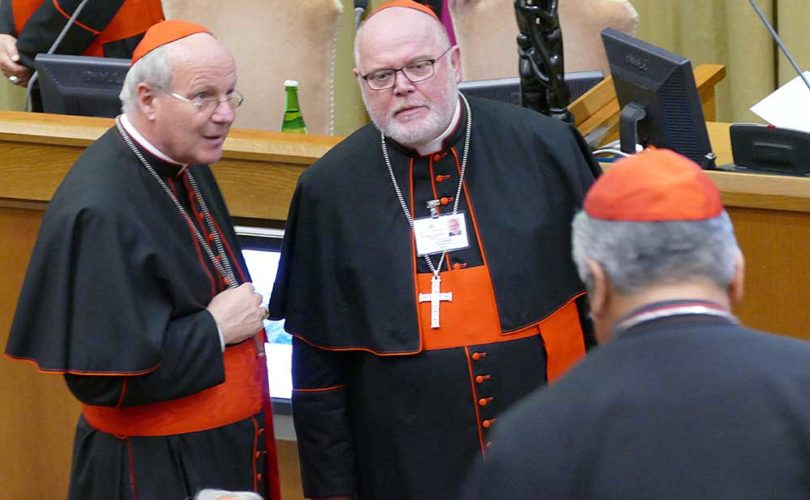 Munich's Cardinal Reinhard Marx talks with Vienna's Cardinal Christoph Schoenborn at the Synod on the Family in 2015.Patrick Craine / LifeSiteNews

Munich’s Cardinal Reinhard Marx, president of the German Bishops Conference, announced the decision today during a press conference at the end of the conference’s four-day Spring Assembly in Ingolstadt.

According to the conference’s news service, Katholisch.de, the great majority of the German bishops approved of an “orientation guide” with regard to mixed marriages and Holy Communion.

A precondition is that the Protestant partner “after a deep discernment in a spiritual conversation with the priest or another pastoral worker comes to the decision of conscience to affirm the Faith of the Catholic Church, as well as to end a 'serious spiritual situation of emergency' and to wish to fulfill the yearning for the Eucharist,” according to the final report.

Cardinal Marx praised this new orientation guide as “positive progress.” He also reports that there has been an “intensive debate” where “serious concerns” were raised. He also pointed out that it is not about a general admission, but a decision in individual cases. Thus, according to Marx, the German bishops wish to go “a path which has profile.”

“We do not want to simply say that everything is indifferent,” he added. With reference to the Code of Canon Law 844 § 4, which allows non-Catholics to be given Communion in cases of “grave necessity,” Cardinal Marx said that the local priest has to assess whether or not there happens to be a “case of exception, in which a non-Catholic may receive Holy Communion.”

He rejected the idea that this path is a path that calls the Protestants to conversion, calling it an “ecumenism of return or conversion.” The German cardinal thus stressed that the document does not mention that Protestants may receive Holy Communion only if they convert.

Additionally, Cardinal Marx explained that it is now in the hands of each local bishop to draw the consequences for his diocese out of this new document. Only the bishop himself may establish new laws in this regard.

According to Katholisch.de, the new document on this matter will be published in a few weeks. Cardinal Marx says that the Vatican's approval is not necessary because it is only about a pastoral guide.

The Evangelical Church of Germany (EKD) has already made a first response to this episcopal decision and has welcomed it as “an important step on the path of ecumenism.”

This German episcopal move and maneuver comes two years after Pope Francis himself, in November of 2015, had made some remarks that were understood to be an opening up to the idea of Protestant spouses receiving Holy Communion. The pope at the time told a Lutheran woman asking about receiving Communion with her Catholic husband to “go forward” guided by individual conscience. His fuller remarks were, as follows:

The theme of Communion for Protestant spouses has been for many years on the agenda of Cardinal Walter Kasper who, only a few days ago, once more argued in favor of it. In a February 19 interview with kathpress.at – the Austrian bishops' news website – he called Pope Francis a “prophetic pope” and said that Catholics and Protestants should now make some concrete steps toward ecumenism, because “there is theologically more possible than what we do right now.” With regard to the teaching on the Eucharist, the cardinal added, both Protestants and Catholics are “very, very close,” even if one does not yet fully agree.

Cardinal Robert Sarah, prefect of the Vatican’s Congregation for Divine Worship, has emphasized that intercommunion with Protestants is impossible.

In a preface to a new book on the Eucharist, the cardinal describes Communion by those who do not profess Catholic faith as “sacrilegious” and an “outrage” against the sacrament.

The cardinal elaborated in 2015, in response to Pope Francis’ comments to the Lutheran woman.

“Intercommunion is not permitted between Catholics and non-Catholics. You must confess the Catholic Faith. A non-Catholic cannot receive Communion. That is very, very clear. It’s not a matter of following your conscience,” the cardinal said.

“It’s not a personal desire or a personal dialogue with Jesus that determines if I can receive Communion in the Catholic Church. How can I know that the Lord has really said: ‘Come and receive My Body.’ No. A person cannot decide if he is able to receive Communion. He has to have the rule of the Church: i.e., being a Catholic, being in a state of grace, properly married [if married].”

Cardinal Sarah: Widespread Communion in the hand is part of Satan’s attack on the Eucharist