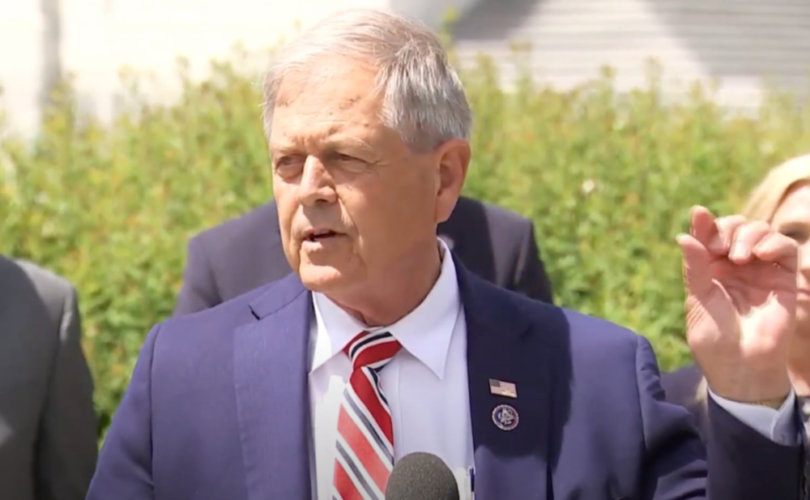 (The Daily Signal) – Following an FBI raid Monday on former President Donald Trump’s private residence at Mar-a-Lago in Palm Beach, Florida, Republican members of Congress are vowing to launch an investigation into what they view as a blatantly partisan political Justice Department if they retake control of the House of Representatives in November.

“Since they took office, the Biden administration has tried to weaponize the Department of Justice and the FBI to go after political enemies,” said Rep. Pat Fallon, R-Texas, in a statement to The Daily Signal. “While we do not know all the details yet, this raid has all the markings of a politically motivated witch hunt.”

On Monday evening, Trump released a statement claiming that Mar-a-Lago had been raided by the FBI.

While details on the raid are still forthcoming, the FBI reportedly conducted the operation as part of an ongoing federal investigation into whether Trump removed classified records from the White House and brought them to Mar-a-Lago.

Photos and reporting from the scene indicated there was a sizable FBI presence, though there hasn’t been an exact number of agents cited. Neither has there been an official explanation given for the raid itself.

“Over the last couple of years, we’ve seen the IRS targeting conservatives. We’ve seen [Foreign Intelligence Surveillance Act] abuse. We’ve seen the Hunter Biden case … . We had the Russian collusion hoax. We had riots in cities that they didn’t follow up on,” Rep. Michael Cloud, R-Texas, said in an interview with The Daily Signal, adding:

What the American people are seeing that’s very clear right now is the two-tiered system of justice in our nation, which goes against the bedrock of what we are as a nation.

House Minority Leader Kevin McCarthy, R-Calif., tweeted that the Department of Justice had “reached an intolerable state of weaponized politicization” and that “when Republicans take back the House, we will conduct immediate oversight of this department.”

The Associated Press reported that Justice Department spokeswoman Dena Iverson wouldn’t comment on the raid or on whether Attorney General Merrick Garland had personally authorized it.

Many GOP lawmakers vowed to investigate officials, such as Garland, who were likely involved in authorizing the raid.

“I think there will be just a litany of people that are tied to this raid first, and then go down the list of their appointees in this administration,” said Rep. Ralph Norman, R-S.C., in an interview with The Daily Signal. “Who authorized what? Who knew about it?”

Norman added, “This is a threat to this democracy, to freedom, to our republic, what they’re doing. This is Gestapo-type tactics.”

The sentiment was echoed by other GOP lawmakers.

Rep. Yvette Herrell, R-N.M., agreed, telling The Daily Signal, “Raiding the offices of political opponents is something that happens in corrupt banana republics, not the United States of America.”

“The American people deserve answers as to why the highest-level members of the Department of Justice [greenlighted] a raid on [President Joe Biden’s] chief political rival, with zero explanation,” said Rep. Kevin Hern, R-Okla., in a statement to The Daily Signal, adding:

It’s unprecedented for the Department of Justice to do this to a former president.We’ve been told no information from the department, besides leaked sources. Everything pertaining to this decision and raid should be investigated.

Rep. Bob Gibbs, R-Ohio, told The Daily Signal in a statement, “It’s clear that, since 2015, certain elements of FBI leadership have done everything they could to take down Donald Trump.”

Yesterday was another example of continuing the VERY dangerous practice by Democrat administrations of weaponizing the levers of power and federal law enforcement to exact political vendettas.

The top bureaucrats and Democrat political appointees of the deep state are using their legal power to politically kneecap Trump. If we don’t stop them now, they will keep doing it.

Rep. Fred Keller, R-Pa., told The Daily Signal that he thinks Garland needs to brief members of Congress on what happened and how the raid was authorized.

“I think the first thing that should happen is, this Friday, Merrick Garland ought to give us a briefing. Why don’t they put us in a room and let us ask him questions?” he said, adding:

I think there’s a reason the American people are losing faith in institutions like the FBI and the Department of Justice … . [W]e deserve answers to find out why they took the unprecedented action to go in and raid the former president’s house.