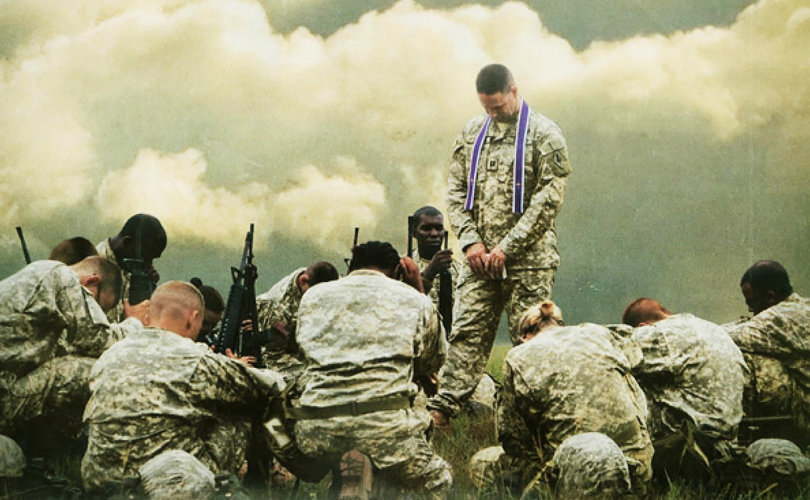 WASHINGTON, D.C., June 20, 2012 (LifeSiteNews.com) – Although the U.S. Military fight and die to uphold freedom, high-level military chaplains report they are increasingly being denied freedom of conscience and freedom of speech. There is also alarm about the negative effects on troop morale over the undoing of the 237-years’ practice of providing traditional religious support for U.S. soldiers.

“We were promised that we would see no change – very little change,” says Col. Ron Crews, alluding to a two-star officer’s assurance that the “Don’t Ask, Don’t Tell” repeal would not impede the ministry of military chaplains. That promise, he says, has not been kept.

Col. Crews, executive director of Chaplain Alliance for Religious Liberty, was speaking at a panel along with military chaplains and religious freedom activists during the 2012 National Religious Freedom Conference in Washington D.C on May 24.

The panelists agreed that the repeal of Don’t Ask, Don’t Tell and other policies have made it difficult, if not a punishable offense, for military chaplains to read passages of Leviticus, pray aloud in the name of God at a soldier’s funeral, or preside over traditional services.

Col. Crews recounted an interchange in 2010 between Adm. Mike Mullen, chairman of the Joint Chiefs of Staff, and a military chaplain.  While Adm. Mullen was briefing the troops on what the repeal might look like, the chaplain asked if those with “biblical views that homosexuality is a sin [would] still be protected to express those views?”

Adm. Mullen reportedly responded, “Chaplain, if you can’t get in line with this policy, resign your commission.”

Another chaplain’s promotion was unexpectedly rescinded, said the colonel. The reason: forwarding an email sent by a fellow chaplain that was critical of the “Don’t Ask, Don’t Tell” repeal. Due to this action he was told he would need to be “more closely supervised.”

Yet another chaplain wished for his chapel to be considered “sacred space” and not used to officiate same-sex marriages. He was told that despite his wishes, his chapel would be “sexual neutral territory.”

After Chaplain (Major General) Douglas Carver, the U.S. Army’s Chief Chaplain, called for a day of prayer and fasting “in keeping with your religious traditions,” the Military Religious Foundation (MRF) “wanted him fired,” said Col. Jacob Goldstein, a panelist and senior U.S. Army Jewish chaplain.  He added that despite the MRF’s claims that this was offensive to Jewish people, “this fasting follows in our tradition.”

Chaplains are not the only ones feeling pressure. Veteran’s Affairs officials told veteran honor guards that mentioning God in prayer was not acceptable. It took a Temporary Restraining Order from U.S. District Judge Lynn Hughes and four months of litigation for the name of God to again be permissible.

Four months was not soon enough to prevent heartbreak to the widows of the fallen.  Lisa Ward, the widow of a war veteran, made a promise to her husband – in the event of his death, he would receive the full burial ritual.  But arriving to bury her husband and fulfill her promise, she was told the full burial ritual was against federal government regulations. The ritual mentioned God.

“I can’t redo my husband’s funeral,” she said with tears in her eyes.

One federal official, speaking on behalf of the Houston National Cemetery, said that prayers must be “inclusive.”  Another asked a veteran to submit his public prayers in writing for approval. Finally, a judge ruled, “In this country, we don’t tell our pastors how to pray.”

But these legal victories do little to reassure believers.  Kelly Shackelford, a panelist at the National Religious Freedom Conference and president and CEO of Liberty Institute, said, “The speed at which we are falling is much quicker than I have ever seen,” referring to the amount of religious freedom complaints that his office receives.

Shackelford’s office is the largest non-profit law firm in America, which deals solely with defending religious liberty. Still, there are too many cases for his office to handle. Over a period of ten years, he says he has experienced the most change in the past year and a half.

More religious freedom complaints are piling up.  But Shackelford said that his office can’t provide any help unless people are willing to take a stand and work through a litigation process. He ended his talk declaring, “We need to stand in a Christ-like manner, but whether we stand or not is not an option.”

Military chaplains have received a stipend for their military duties since the U.S. military’s founding.  General George Washington commenting on this practice said, “It is necessary that we provide them [the military] with a spiritual substance.”

For 237 years it has been considered essential to provide U.S. troops with moral and spiritual counsel. Gen. Major Carver sought to demonstrate this importance by recounting of a soldier’s experience.

A young private was aboard the torpedo-hit USAT Dorchester on February 3, 1943.  Surrounded by the dead and debris, the vessel sinking lower, he later said of the event, “I could hear the chaplains preaching courage, their voices were the only thing that gave me hope and kept me going.”

A DVD of the 1 hr. 23 min. session or a download of the audio can be ordered from C-Span by going here.