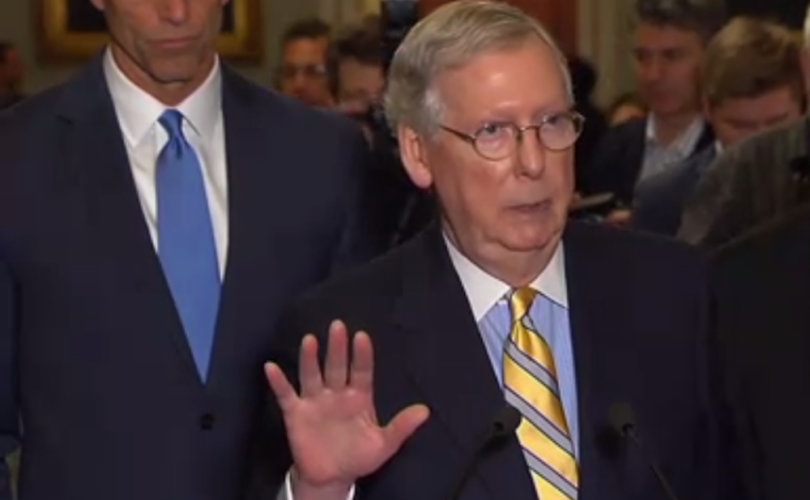 The Hill reported that President Trump “faces an appointment blockage worse than any seen before in the past four presidencies.”

The president has made 57 nominations, but only seven have been confirmed. The rest still await approval by either the Senate Judiciary Committee or a full Senate vote.

Plus, for 10 of the 50 nominees kept waiting in the wings for a full vote, Democrats demand at least 30 hours of senate floor debate each.

“We are witnessing confirmation obstruction on steroids,” the Hill’s Victor Williams summarized. “The unprecedented obstruction is, obviously, part of a wider attempt by partisan opponents to discredit Donald Trump’s election; to ‘resist’ Trump’s governance.”

The problem isn’t confined to the judicial branch, either. Hundreds of top executive branch and agency posts remain empty, and the Senate has confirmed fewer than 50.

The coordinated delays began with the Trump cabinet, which took the longest of any president in 30 years. Trump doesn’t even have a Solicitor General to represent the government before the Supreme Court. (He has nominated Noel Francisco as this “10th Justice,” but Senate Democrats refuse to confirm him.)

In the meantime, vacancies threaten to stall the judicial system and ultra-liberal Obama leftovers are running the store.

The Hill says there are more than 130 court vacancies (1/6th of the federal judiciary), and 52 districts have declared court vacancy “emergencies.” Twenty-two more empty benches are expected by year’s end.

The impact is felt throughout the country. “Our nation is disadvantaged when our federal judiciary does not have sufficient judges to hear cases and resolve disputes in a thorough and timely fashion,” the American Bar Association explained. “Persistent vacancies in a busy court increase the length of time that litigants and businesses wait for their day in court, create pressures to ‘robotize’ justice, and increase case backlogs that perpetuate delays in the future.”

As the backlog of judge nominations grows, Senate Majority Leader Mitch McConnell, R-Kentucky, is under increasing fire by conservatives for not doing more to push through Trump’s pro-life nominees.

Obviously, the Democrats have a strategy.

“The level of obstruction exhibited by Senate Democrats on these nominees is simply breathtaking,” McConnell complained. “Our colleagues (Democrats) need to stop this immediately — for the sake of our country.”

Even during the campaign, both sides admitted that of all the powers of the presidency, appointing judges makes the greatest and longest-lasting impact on our nation and culture. Trump can issue all the executive orders he wants, but without judges to back them up, their effect will be nullified.

Rather than beg, McConnell and Senate Republicans already have the power to break the obstruction. A rising tide of conservative voices, including pro-life leaders, are saying McConnell should do three key things to move the pro-life, pro-family, pro-marriage agenda forward:

Sen. Ron Johnson, (R-Wisconsin, says the 30-hour debate demand could be lowered to two hours by a simple majority if McConnell will implement Reid’s “nuclear option.” In 2013, then-Majority Leader Harry Reid and his Democrat majority changed senate rules to neuter filibusters and breeze-in Obama nominees by a simple majority vote.

Establishment Republicans, however, are wary of changing rules for fear of when they are not the majority party in the Senate. Johnson answers that concerned citizens want bold action, not timidity.

“Change the rules of the Senate to limit debate .. .to two hours on the Senate floor,” Johnson advocated. “Use Senate committees to vet nominees and report on them to the full Senate, where leadership can assign appropriate members to make the case for or against a nominee in the allotted two hours. Then vote.”

McConnell is taking a lot of the blame, even from pro-life leaders. Tim Wildmon, AFA president, encourages fellow concerned citizens to “Tell Senator McConnell to either ‘Get to work’ or ‘Step down!’”

“The Republican Senate majority have within their reach the legitimate use of power to put an end to this Democratic obstruction,” Wildmon said in a press release. “Yet these Republicans have refused to lift a finger to end this madness.”

“Democrats are killing conservative legislation using the filibuster,” Wildmon concluded.  “Unless Sen. McConnell leads the Senate Republican majority to waive the filibuster rule and change to majority vote, then it’s impossible to end the Democratic obstruction.”

Legislators are speaking out. Sen. Richard Shelby, R-Alabama, who also favors the “nuclear option,” pointed out that the filibuster is “not the law. It’s not the statute. It’s not the Constitution.” Rep. Trent Franks, R-Arizona, opined, “It is time for America to abolish the 60-vote Senate rule” to end the filibuster and vote by simple majority.”

McConnell did a selective “nuclear option” in the case of Supreme Court Justice Neil Gorsuch’s nomination.

The AFA listed establishment Republican senators who oppose the “nuclear option.” They have backed a letter co-authored by Sen. Susan Collins, R-Maine, which explicitly says they oppose overcoming filibusters with a simple majority vote rule. The AFA calls the list of “obstructionists” “The Senate Swamp.”

“These 30 Senate Republicans, by refusing to stop the Democratic filibuster, want to allow the ongoing obstruction of Democrats,” the AFA website stated. “Keeping the filibuster is nothing more than a mechanism for Democrats and liberal Republicans to further capitulate to the left. This is by intention.”

Trump has criticized McConnell in the past, but on Monday solidified his support for him. However, Trump also said he sympathized with former chief strategist Steve Bannon, who advocated a clean sweep of foot-dragging, establishment Republicans as RINOs “Republicans in Name Only.”

ForAmerica president David Bozell favors ousting the Majority Leader. “Mitch McConnell is good at two things: making excuses and going on recess. He callously deflected blame onto his colleagues for his own laziness, lack of leadership and lack of results,” he said.

Many pro-life leaders continue to advise patient action. “We need to support our elected officials,” Priests for Life’s Father Frank Pavone urged. “When we elect them, we willingly share in the burden of their responsibility. We do not vote them in and then take a back seat and watch what they can do for us. … We need to be directly involved and be ready to stand with them actively in any pro-life battle rather than take a judgmental attitude toward them.”

And yet, even Fr. Pavone admitted, “The lack of the 60 votes is what is holding almost everything back.”

“Ultimately, the best resolution to this problem is the 2018 midterms, which we need to be working on right now, and which can result in a 60+ pro-life majority in the Senate,” Pavone said. “Then we can get pro-life legislation to our pro-life President’s desk.”