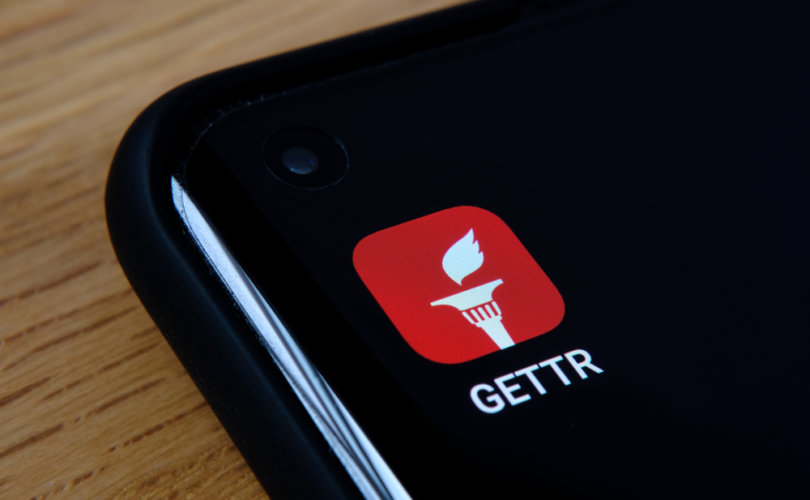 (LifeSiteNews) — Gettr, the social media app that has enjoyed a brief moment in the sun as a new home for conservative Twitter and Facebook refugees, is being slammed for disingenuous practices and for “falsely claiming to be a ‘free speech’ platform and an alternative to Big Tech.”

“Just in case sh*t over at Twitter gets even dumber, I’m here now as well,” Rogan wrote in his inaugural post on Gettr. “Rejoice!”

Over the next few days, a reported one million people signed up as new Gettr users.

Since then, the site has come under fire.

Rogan’s brand new Gettr account had immediately boasted 9 million followers.  “It’s not real, though,” Rogan said in a guest appearance on The Tim Dillon Show. “Because Gettr doesn’t even have 9 million people, it’s a lot of f*ckery.”

The site actually has a total of only 4 million users. The 9 million cited on Rogan’s account includes his Twitter followers, a practice that Gettr justifies because it automatically imports Rogan’s tweets.

But criticism of Gettr runs far deeper than that.

Not an escape from Big Tech

“Gettr, the social media platform that bills itself as a way to escape Big Tech, actually includes trackers and features from companies like Facebook and Google, according to new research,” wrote Vice tech journalist Joseph Cox.

“The news muddies Gettr’s pitch as an alternative to companies like Facebook, but it also shows just how pervasive Big Tech, in its many forms, is,” said Cox. “The app still contains various trackers from Silicon Valley.”

“Gettr not only depends on Amazon AWS for hosting along with Apple and Google App Stores for distribution, but the app is also tracking users for Facebook and Google,” wrote Gab CEO Andrew Torba in a widely circulated email.

Torba cited evidence of “rampant censorship by Gettr, noting that the app banned America First patriots for no reason and then shadowbanned reporters who asked why.

“I have a problem with foreign billionaires trying to astroturf Christians and conservatives into a Big Tech honeypot,” said Torba, who said he has a problem with “grifters, hypocrites, and liars.”

“I know many good and decent people will be signing up for Gettr at the behest of the talking heads they trust on Fox News and elsewhere. I think they deserve to know exactly what they are getting into.”

Torba was alluding to Gettr founder Jason Miller and the company’s chief source of funding, Guo Wengui, a Chinese billionaire.

“I might be part of the Chinese Communist Party now, I believe,” joked Rogan during his interview with Dillon.

The forerunner to Gettr was “Getome,” an app that targeted Chinese audiences.  The China connection has stirred concern that Gettr has built-in vulnerabilities to Chinese interference.

Founder Jason Miller is a former Donald Trump aide who as a married man was accused of spiking the drink of a strip club worker with an abortion pill after he impregnated her, causing her to go into a coma. Miller is reported to have had at least one other high-profile extramarital affair and numerous liasions with prostitutes.

‘Not at all safe’

“After a multi-faceted, technical analysis of GETTR, it is evident that the platform is not at all ‘safe from the Silicon Valley Mafia’s tyrannical overreach,’ as they claim,” said the report.

The Talk Liberation analysis was conducted by cybersecurity expert Sean O’Brien, CSO of Panquake.com and founder of Privacy Lab at Yale Law School.