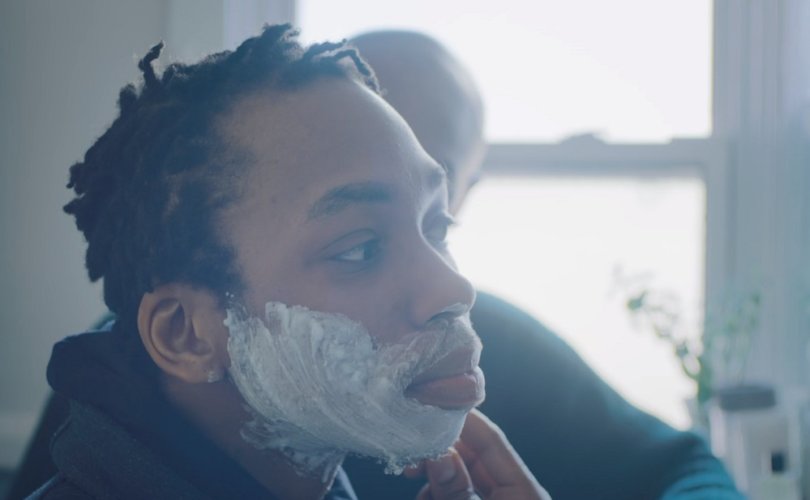 BOSTON, Massachusetts, May 28, 2019 (LifeSiteNews) ― A purveyor of razor blades has once again turned to social engineering as a form of self-advertisement.

A new TV ad for Gillette features an older man showing a very masculine-looking youth, who hints at being a female, how to shave her face.

“I always knew I was different; I didn’t know there was a term for the type of person that I was,” the hero continues.

“I went into my transition just wanting to be happy. I’m glad I’m at the point where I’m able to shave.”

The novice shaver is Toronto-based trans activist Samson Bonkeabantu Brown, and the older man is the youngster’s father. According to Brown’s website, the professional performer believes she has been “gifted from birth with the gifts of necromancy, narcomancy and mediumship.”

“I have used these gifts to assist me throughout my life, and especially with coming to terms with my gender identity,” Brown wrote.

“Transitioning has been a form of shapeshifting. At least that is how I understand it from the messages my ancestors have told me. I also see transitioning as a form of dying. The female me completely died when I began to medically transition and I had already grieved the female I never related to or identified with,” the actor continued.

“When I transitioned my family had to grieve the female they assigned me as. For some of them, it’s been the longest grieving/funeral process ever. For others, they had grieved along with me, long before I ever went under the knife. I think my mum is still grieving. She is just putting on a better show of being okay with having to grieve.”

This is the second of recent Gillette ads dedicated to beaming radically different ideas about masculinity into American homes. Earlier this year, Gillette greenlighted an advertisement in which men were lambasted for “toxic masculinity.” While showing unpleasant stereotypes about male behavior, it asked, “Is this the best a man can be?”

January’s advertisement sparked a backlash, with over a million people voting down the ad on YouTube within the first weeks of its appearance and many men taking to Twitter to announce their boycott of the Procter & Gamble–owned brand.

Gillette has also thrown its hat in the “body acceptance” ring by sharing an ad on Twitter featuring a female model who appears to be morbidly obese.