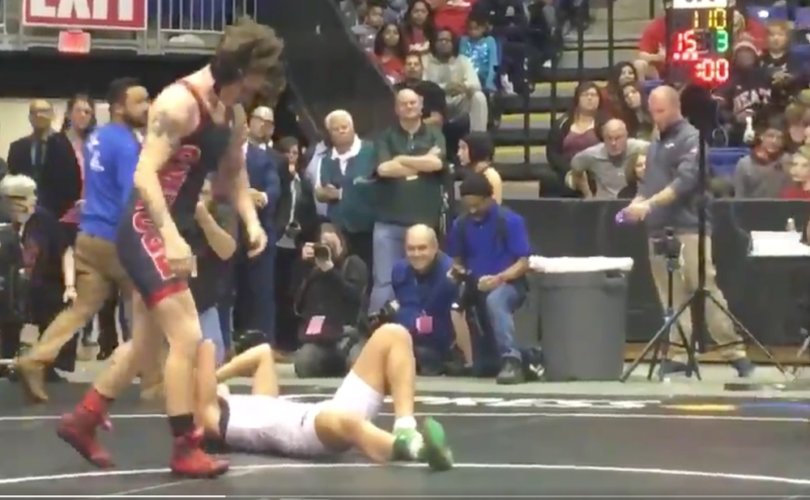 Mackenzie “Mack” Beggs, 18, is being hailed as a transgender hero by LGBT advocates after defeating Chelsea Sanchez on Saturday in the Texas Girls’ Class 6 A 110-pound division championship for the second year in a row.

Many in the crowd booed, however, when the steroid-pumped girl defeated her opponent in the last bout in about 10 seconds and was declared state champion.

End of Mack Beggs title match was chaos. Had huge lead, nearly got pinned, then came the crescendo of cheers/boos. pic.twitter.com/FrLixVsTAj

The 5’ 1” Beggs, who is widely described by media as a “female transitioning to male,” began receiving testosterone in 2015 and plans to have what she calls “top surgery” in the near future. “Bottom surgery” is not something she contemplates having soon.

The wrestling champion’s treatments have so far given her a mustache and a deep, male-sounding voice.

Doctor Michelle Cretella, president of the American College of Pediatricians, told LifeSiteNews that welcoming transgender ideology in sports opens the door to cheating.

“Embracing transgender ideology in sports requires that we embrace cheating through doping,” she said. “Doping is a slang term that refers to using a substance to enhance athletic performance. The use of anabolic steroids (including testosterone), and erythropoietin or blood, confers an unfair athletic advantage to both men and women.

The pediatrician stated that Beggs’ peers have been cheated.

“Beggs is a girl wrestler doping testosterone,” she said. “This has given her an unfair advantage over her fellow female wrestlers since she first began taking the testosterone to impersonate a male in 2015. She should therefore be dismissed from the girls’ team and have her titles revoked.”

Ultimately, however, Cretella feels that Beggs is the victim – although not of the Texas athletic guidelines.

“Mackenzie, sadly, is being used by a medical establishment engaged in a highly unethical but lucrative social experiment likely to wreak havoc on her long-term physical and mental health,” the doctor concluded.

According to Texas’ state-level high school athletics organization, athletes must compete as the sex listed on their birth certificates. Beggs blames the guidelines, not her use of testosterone, for any unfair advantage she has over female opponents.

Beggs told the Dallas Morning News’ Sports Day that she had been forced to compete against girls.

“But what can I tell people? I can tell the state legislature to change the policy, but I can’t tell them to change it right now. All I can hope for is that they come to their [senses] and realize this is stupid and we should change the policies to conform to other people in my position.”

Along the road to Begg’s 2017 victory, two girls forfeited their matches against Beggs when ordered by parents to do so. One mother told reporters that she was concerned about Beggs’ steroid use. This year only one girl refused to wrestle Beggs. Beggs was undefeated this year, entering the state tournament with a 32-0 record.

The loophole that allows athletes to compete while using steroids may be closed by a Texas bill called “SB 2095,” which was passed by the Texas state senate in May 2017. It states that the state’s high school athletics organization, the University Interscholastic League, can “declare a student ineligible for competition on the basis of steroid use” even if the student is taking the substances for “a valid medical purpose.” No exceptions are mentioned for “transgender students” or boys or girls undergoing “transitioning” to the opposite sex.

A senior at Euless Trinity High School near Dallas, Beggs anticipates competing against boys when she goes to college in the fall. If she wrestles, she will have to. According to the Columbus Dispatch, USA Wrestling and the U.S. Anti-Doping Agency already classify Beggs as male because of her testosterone “intake.”