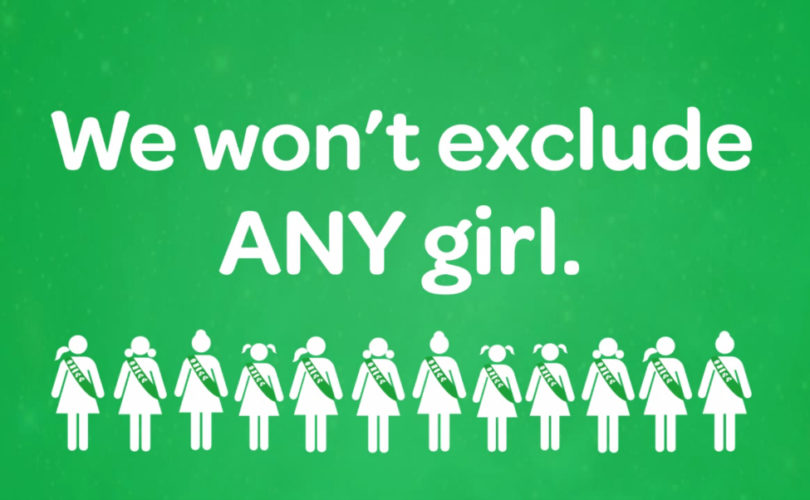 July 2, 2015 (LifeSiteNews) – An unusual request from a major donor to a regional branch of the U.S. Girl Scouts has drawn attention to the organization’s ongoing support for gender ideology and transgender issues.

Girl Scouts of Western Washington CEO Megan Ferland revealed last week that the council had recently received a donation for $100,000. However, after the Girl Scouts’ practice of allowing boys who identify as girls to join the Scouts hit the news during the media’s coverage of the Bruce Jenner case, Ferland says she received a note from the donor putting a condition on the donation.

“Please guarantee that our gift will not be used to support transgender girls,” the donor reportedly asked. “If you can’t, please return the money.”

In the end, Ferland said she chose to give the $100,000 – what could have comprised nearly a fourth of the council’s annual fundraising goal – back to the donor.

“Girl Scouts is for every girl,” Ferland stated in a report from SeattleMet.com. “And every girl should have the opportunity to be a Girl Scout if she wants to.”

“Our vision at Girl Scouts of Western Washington is that EVERY girl in our region—regardless of her race, ethnicity, socioeconomic status, sexual orientation, gender identity or geographic location—is empowered to unleash her potential, build her future and transform her world,” states the campaign.

This is not the first time that Ferland has been involved in a controversy over the Scouts’ support for transgenderism.

When a boy self-identifying as a girl attempted to join a Colorado Girl Scout troop in 2011 and was initially refused by the leader because of his male gender, Ferland, then head of the Colorado council, issued a statement welcoming boys identifying as girls, and saying efforts were in progress to find the boy a troop. The council also renounced the troop leader’s actions in refusing the boy access.

“Every girl that is a Girl Scout is a Girl Scout because her parent or guardian brings her to us and says, ‘I want my child to participate,’” Ferland stated at the time. “And I don’t question whether or not they’re a girl.”

SafeZone for Girl Scouts Sat, May 23, 11 a.m.-3 p.m. Tacoma Learn how you can become an ally and advocate for your Lesbian, Gay, Bisexual, Transgender and Queer (LGBTQ) peers. Includes activities and discussion around: inclusive language, the process of coming out, the power of the straight ally, how to respond to homophobic/trans-phobic incidents, where to go for help and much more. Bring lunch.

For years, pro-family leaders have raised alarms about partnerships and programs that indicate that the Girl Scouts have moved toward embracing a radical feminist identity.

As far back as 2004 a U.S Catholic Bishop intervened when a Girl Scout-Planned Parenthood partnership threatened young girls.

Then-Austin Bishop Gregory Aymond warned local Catholics not to sign their children up for Planned Parenthood’s “Nobody’s Fool,” a sex-ed campaign designed for pre-pubescent children which had been integrated into the local Girl Scouts.

A survey, also from 2004, found that many Girl Scouts councils were partnering with Planned Parenthoood in some fashion.

In 2010 the Girl Scouts were found to be pushing a radical agenda on its young members with Planned Parenthood given access to distribute an explicit ‘sex guide’ at a closed-door, no-adults-welcome meeting at the UN sponsored by the Girl Scouts.

Lincoln, Nebraska Bishop James Conley warned in 2011 as auxiliary bishop of Denver that involvement in the Girl Scouts could serve to make girls more open to the pro-abortion agenda.

“The San Francisco Girl Scouts participate in many parades that celebrate the diversity of San Francisco,” Girl Scouts of Northern California Communications Manager Dana Allen told LifeSiteNews at the time. “Girl Scouts is inclusive and reflects the communities we serve.”

A sexuality-based Girl Scout troop was started earlier this year in Utah aimed at gay and lesbian families and boys who consider themselves “transgender.” It meets at the Utah Pride Center.

“As long as a youth identifies as a girl or with girls, even if they are genderfluid on the day that they registered, then they can become a Girl Scout,” Shari Solomon-Klebba, the Utah Girl Scout outreach coordinator, and an open lesbian who started the troop, told a local news station at the time.

The United States Conference of Catholic Bishops (USCCB) urged caution last year in engaging with the Girl Scouts after conducting a two-year examination of the scouts. That study identified concerns about several Girl Scouts USA policies, affiliations and structural weaknesses.

The representatives of two organizations for girls frequently considered a Christ-centered alternative to the Girls Scouts told LifeSiteNews this latest incident with the Western Washington Scouts underscores the need for other options for families and their children.

American Heritage Girls marked its 20th anniversary this past week. There are more than 40,000 members within the organization.

“Now more than ever American Heritage Girls recognizes the importance of bringing Christ-centered, character development programming to girls across the nation.”

“I feel very blessed that we can offer an authentically Catholic alternative to Girl Scouts,” Joan Stromberg told LifeSiteNews.

Little Flowers started over 20 years ago, not as a reaction against what Girl Scouts were doing, or where they are now, Stromberg said, but as a way to help moms and girls bond together to learn about the world through a Catholic lens.

“It is sad that Girl Scouts policies and positions have put them in direct conflict with Church teachings,” Stromberg continued. “I am just pleased that girls and moms have alternative places like Little Flowers where they can go.”

Pope tells Girl Scouts to oppose ‘ideologies’ against God’s design for marriage
Girl Scouts: Why not? A concerned mom speaks out (VIDEO)