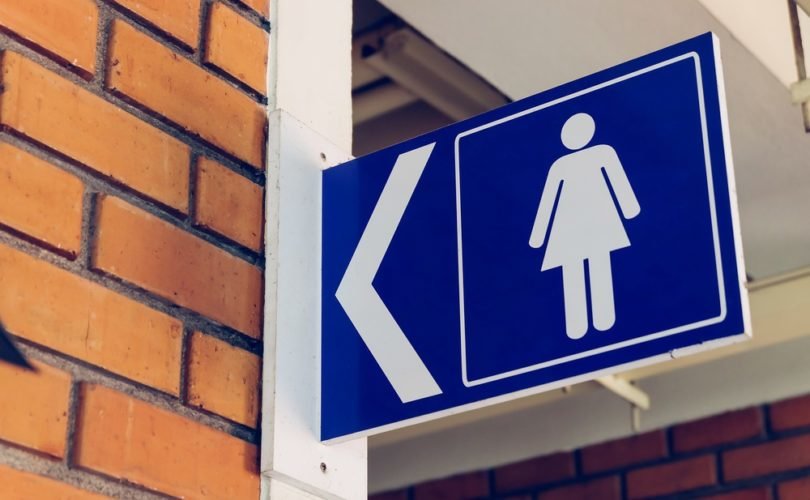 SHELBY, North Carolina, February 7, 2020 (LifeSiteNews) – A high school student is suing her school district, claiming that not being allowed to use the boys’ restrooms aggravated her kidney disease.

The court has temporarily required the school to let the female student use the boys’ restroom.

As reported by local newspaper Shelby Star, the female student claims to be a boy. To protect the identity of the transgender student, she is only known as “John Doe.”

The lawsuit was filed on Tuesday and is brought against Cleveland County Schools in North Carolina, as well as superintendent Stephen Fisher and principal Julie Rikard of Kings Mountain High School.

According to court documents looked into by the Shelby Star, “John Doe” is currently a senior at Kings Mountain High School. Before her freshman year, the student began “transitioning” to try to be a boy. The school was informed that “John Doe” claimed to be male. According to the lawsuit, Rikard said she should use the girls’ restroom only, which the suit claims is discrimination.

“John Doe” said in a sworn statement, “Because I am a boy I could not use the girls’ restroom comfortably and ended up avoiding the restroom for the entirety of the year.”

In the few instances the gender-confused student had an emergency, girls at the school would laugh at her “because they knew I was trans and made fun of me for having to use the girls’ restroom,” she claims, according to the Shelby Star.

“John Doe” began testosterone treatments during her sophomore year. At that point, the Shelby Star reports, the student was told to use the separate restroom meant for teachers.

“John Doe” said, according to the local newspaper, that the restroom was far from her classroom and she would “get ‘looks’ from teachers when using it.”

Still, she refused to use the restroom, unless there was an emergency. Her doctors say that decision “may have worsened” a kidney disease she has had since birth.

The Shelby Star quotes Deanna Wilson Adkins, MD, an assistant professor of pediatrics at Duke Department of Pediatrics, from the court documents: “In addition to the escalation” in her “anxiety and distress that has resulted from Kings Mountain High School’s refusal to let ‘John’ access the restroom on equal terms” with biological boys, her kidney function “has also been compromised as a result” of her lack of access “to appropriate restroom facilities.”

On the website of the Duke Department of Pediatrics, the doctor states she cares for children with all kinds of hormonal disorders, for instance “disorders of sexual development, including transgender.”

“Sexual development, pubertal disorders, and gender disorders are a special interest of mine,” Adkins says on her bio. She has been in contact with “John Doe” since 2017.

Both Adkins and another doctor had recommended to Kings Mountain High School that they allow “John Doe” to use the boys’ restroom closest to her classroom.

The Shelby Star explained, “Superintendent Stephen Fisher said the district takes student needs like Doe’s on a case-by-case basis and tries to come up with individualized plans to meet their needs. He would not say if the district has made similar accommodations for other students in Doe’s position in the past.”

Shearra Miller, chairwoman of the school board, said, “We made an accommodation for the student that we felt was in the best interest of the student at the time.”

North Carolina was in the news in 2016 for its “Public Facilities Privacy & Security Act,” commonly known as House Bill 2. That law delivered a definition of biological sex, namely “The physical condition of being male or female, which is stated on a person’s birth certificate.”

Based on that definition, “Local boards of education shall require every multiple occupancy bathroom or changing facility that is designated for student use to be designated for and used only by students based on their biological sex.”

While the law allowed for accommodations, those stopped short of allowing a girl to use a multiple occupancy restroom designated for boys.

After the governor signed the law, outcry from the left was enormous. Various companies decided to stop expansion in North Carolina, including PayPal and Deutsche Bank.

Within a month, it was estimated that this protest had cost North Carolina “more than 1750 jobs and more than $77 million” in investments.

Even sports organizations protested the new law. The NBA relocated the 2017 All-Star Game to New Orleans, Louisiana. Previously, it was scheduled to take place in Charlotte, North Carolina.

With the NCAA putting pressure on North Carolina in 2017, announcing that no championship games would be hosted in the state until at least 2022, the law was partially repealed.

That partial repeal was confirmed by a U.S. court settlement in 2019. Reuters summarized at the time, “Transgender people in North Carolina can use any public restroom in state-run buildings that conforms with their gender identity.”