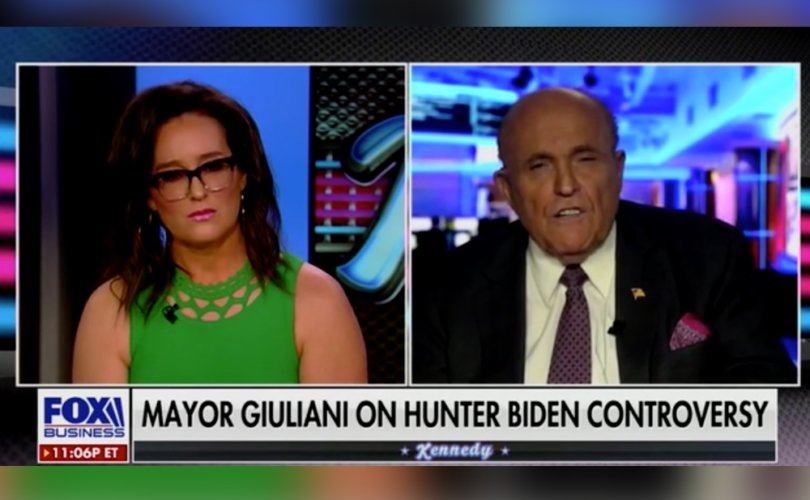 NEW YORK, November 2, 2020 (LifeSiteNews) – Rudy Giuliani is staking his reputation as a lawyer and the former mayor of New York City on the credibility of the Hunter Biden laptop scandal.

Giuliani originally presented the New York Post with a copy of the hard-drive of Hunter’s computer, which contained details of Hunter’s Ukrainian business deals, and evidence that Joe Biden knew of them. Since then, Giuliani has been releasing videos, explaining the contents of the laptop and accusing the Biden family of abusing their position as the Vice-Presidential family.

Steele was the former British spy, who worked on a report accusing Trump of meeting with Russian prostitutes and alleging Russian collusion with Trump during the 2016 election. The report was featured in the subsequent impeachment of the president, when he was charged for abuse of power and obstruction of Congress, but later acquitted.

The Steele report was heavily disproven and Trump himself called it a “Fake and Unverified ‘Dossier,’ a total phony conjob, that was paid for by Crooked Hillary to damage me and the Trump Campaign.”

Giuliani responded to Kennedy’s accusation strongly, saying that she had accused him of being “similar to a crook…Christopher Steele’s a criminal. You’re asserting that I’m a criminal.”

He further added details of his professional record: “I’ve been a United States attorney, associate attorney general, mayor of New York City and a member of the bar for 50 years. I’ve never been accused of anything, and you're accusing me of being Christopher Steele.”

The former New York mayor stated that he had evidence for the claims which he was making: “every single thing is here, and I want you to look at it and then you apologize to me.”

Giuliani continued, “I came on your show in good faith to give you evidence that has been withheld from the American people, and I get defamed.”

However, Kennedy then accused Giuliani of having suspect sources for his evidence, implying they came from Eastern Europe and that “Eastern Europe is a cesspool.” To this, Giuliani responded that Kennedy was simply “repeating lying propaganda from the Democratic National Committee and the crooked Biden family.”

“This is Hunter Biden’s material,” said Giuliani, “it is proven a hundred times over, and I have a voice recording of him in which he talks about being in business with the Chinese spy master.”

The audio recording referred to by Giuliani was released by The National Pulse, and details Hunter Biden referencing Patrick Ho, a former secretary for Home Affairs in Hong Kong. The recording presents Hunter complaining about a journalist “calling about my representation of Patrick Ho — the f*****g spy chief of China.”