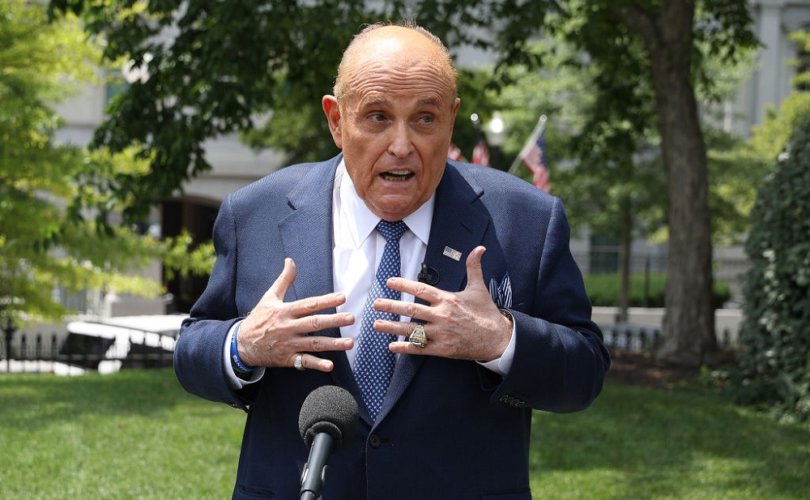 November 20, 2020 (LifeSiteNews) — In a press conference on November 19, former New York mayor Rudy Giuliani and other top Trump attorneys laid out evidence of voter fraud in the November 3 election in cities across several swing states. Fraudulent election practices in these predominately Democratic areas were not isolated events, they said.

Giuliani asked, “What happened on the morning of November 3, when they were going to count this new kind of ballot, this mail-in ballot? Did every Democrat leader — in Pennsylvania, and in Michigan, and in Wisconsin, and in Georgia, and in Nevada, and in Arizona — they all wake up and all separately have the same idea?”

“Did they all separately have the idea that were going to put Republican inspectors in pens? We’re not going to let them look at mail-in or absentee ballots?”

“This was a plan,” Giuliani said. “You’d have to be a fool not to realize that.”

He referred to numerous reports that Republicans poll-watchers in Pennsylvania, Michigan, and Georgia have been denied access to the ballot-counting process on Election Day and after. Giuliani stated that the Trump campaign has had contact with “50 to 60 witnesses” of attempts to block poll-watchers in Pennsylvania alone. Video evidence has shown numerous election-monitors in Philadelphia stopped from entering polling sites and ballot-counting centers in the city during Election Week.

Giuliani also pointed to testimony of illegal ballot-curing, duplicate voting, voting by non–state residents, and vote coaching by election officials, among other things. Each of these types of fraud has been alleged by election workers and voters from battleground states, as detailed in publicly available affidavits and recent lawsuits.

“They carried it out in places they could get away with it,” Giuliani said about Democratic officials. “They didn’t carry it out in neutral places” or “where the law is respected.”

“That’s the reason why he probably didn’t have to go out and campaign. He had to have known what they we’re going to do. This had to be planned in advance,” Giuliani said, calling voter fraud a “national conspiracy.”

Biden boasted on PBS Frontline days before the election about having “the most extensive and inclusive voter fraud organization in the history of American politics.” Liberals have described the statement as “a slip of the tongue.”

Hillary Clinton declared in August that “Joe Biden should not concede under any circumstances.” “I do believe he will win if we don’t give an inch,” she said.

Two months earlier, the “Transition Integrity Project,” a group including John Podesta, the 2016 Clinton campaign chairman, gamed out an election scenario that featured Biden refusing to concede. Podesta, along with numerous journalists and the former head of the DNC, imagined a “Biden Campaign’s retraction of its election night concession” and Biden encouraging liberal states “to secede from the Union.”

A Trump campaign lawyer sued Raffensperger earlier this week over an extra-statutory agreement that the secretary signed with Democrats in March mandating extra time for voters to fix possibly compromised ballots.

Giuliani, Powell, and Ellis spoke of Dominion’s connections to the Venezuelan government as well. Powell noted that Dominion purchased Sequoia Voting Systems, which previously was a subsidiary of a company called Smartmatic.

Smartmatic, founded by a Venezuelan national, helped to provide election equipment for Venezuela’s rigged 2004 recall referendum stolen by incumbent dictator Hugo Chávez. In 2005, Smartmatic branched out into the American election technology market, purchasing U.S.-based Sequoia, before selling it in response to a congressional inquiry.

As the Associated Press stated days ago, “experts say it’s difficult to know for certain whether some Sequoia code may be used in Dominion’s software because of the industry’s limited transparency.”

Giuliani concluded, saying, “If we let this happen, we’re going to become Venezuela. We cannot let this happen to us. We cannot allow these crooks, because that’s what they are, to steal an election from the American people. They elected Donald Trump. They didn’t elect Joe Biden.