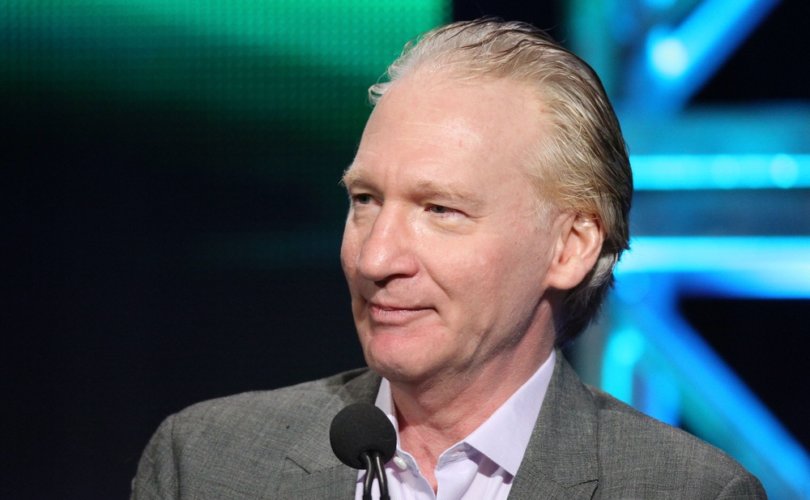 Fox News reports that during the Friday broadcast of his HBO show Real Time, Maher said that if “something about the human race is changing at a previously unprecedented rate, we at least have to discuss it. Broken down over time, the LGBT population of America seems to be roughly doubling every generation.”

“I’m happy for LGBT folks that we now live in an age where they can live their authentic lives openly,” Maher said. “But someone needs to say it. Not everything’s about you. It’s OK to ask questions about something that’s very new and involves children. The answer can’t always be that anyone from the marginalized community is automatically right, trump card, mic drop, end of discussion, because we’re literally experimenting on children. Maybe that’s why Sweden and Finland have stopped giving puberty blockers to kids because we just don’t know much about the long-term effects, although common sense should tell you that when you reverse the course of raging hormones, there’s going to be problems.”

“This isn’t just a lifestyle decision, it’s medical,” he went on. “Weighing trade-offs is not bigotry […] This is a phenomenon we need to take into account when we look at this issue. Yes, part of the rise in LGBT numbers is from people feeling free enough to tell it to a pollster and that’s all to the good, but some of it is — it’s trendy.”

“If you attend a small dinner party of typically very liberal, upper-income Angelenos, it is not uncommon to hear parents who each have a trans kid having a conversation about that. What are the odds of that happening in Youngstown, Ohio? If this spike in trans children is all natural, why is it regional?” he asked. “Either Ohio is shaming them or California is creating them […] If we can’t admit that in certain enclaves there was some level of trendiness to the idea of being anything other than straight, then this is not a serious, science-based discussion. It’s a blow being struck in the culture wars using children as cannon fodder.”

Maher added that “kids do also have phases.” “They’re kids, it’s all phases. The dinosaur phase, the Hello Kitty phase, one day they want to be an astronaut, the next day you can’t get them to leave their room. ‘Gender-fluid’ — kids are fluid about everything. If kids knew what they wanted to be at age 8, then the world would be filled with cowboys and princesses.”

That was enough for GLAAD to tweet Saturday that Maher was “spout[ing] inaccurate, anti-trans rhetoric” and “targeting youth”:

Maher’s commentary touches on a phenomenon explored in Wall Street Journal reporter Abigail Shrier’s book Irreversible Damage: The Transgender Craze Seducing Our Daughters, which explores the phenomenon of rapid-onset gender dysphoria (ROGD), a term coined in 2018 by Brown University behavioral scientist Lisa Littman. She found that a significant percentage of gender dysphoria among minors came not from innate feelings of discontent with one’s true sex but from outside influence.

For her book, Shrier “dug deep into the trans epidemic, talking to the girls, their agonized parents, and the counselors and doctors who enable gender transitions, as well as to ‘detransitioners,’” according to the publisher’s description. “Coming out as transgender immediately boosts these girls’ social status, Shrier found, but once they take the first steps of transition, it is not easy to walk back.”

GLAAD’s insistence that “Youth are not rushed into medical transition” is directly contradicted by the firsthand accounts of detransitioners, who describe having hormone treatments pushed on them after short consultations and little-to-no exploration of alternate explanations for patients’ issues or discussion of transitioning’s downsides.

A range of scientific literature indicates that reinforcing gender confusion often fails to prevent significant emotional harm up to and including attempted suicide (with or without surgery), including by tending to distract from exploring other issues that may be the actual root of a patient’s mental or emotional unrest.

On top of those issues, a growing number of experts warn that surgically or chemically reinforcing gender confusion imposes irreversible harm on children such as infertility, impairment of adult sex function, and reduced life expectancy, as well as the psychological toll of being “locked into” physical alterations regardless of whether they change their minds when they mature. Studies indicate that more than 80% of children experiencing gender dysphoria outgrow it on their own by late adolescence, unless their confusion is reinforced by adults.

While known for being an unapologetic liberal, this is not the first time Maher has dissented from his movement’s orthodoxy. In January, he slammed the U.S. medical establishment as not “know[ing] a lot about anything” and said the reaction to COVID-19 was scarier than the virus itself.