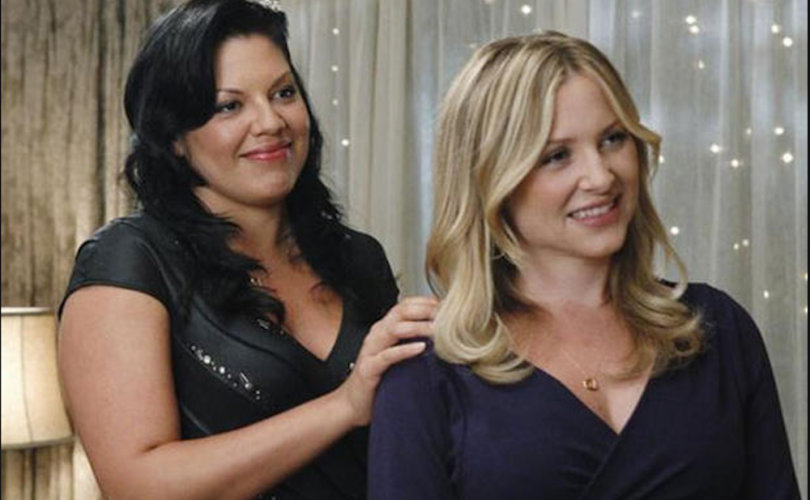 The 21st annual report is used to pressure Hollywood into presenting the gay lifestyle to the country as mainstream. It has been a resounding success, gaining positive portrayals of lesbians, bisexuals, transgenders, and queers on TV.

“This is the highest percentage of LGBTQ regular characters GLAAD has ever counted on prime-time, scripted broadcast programming,” GLAAD boasted.

Bisexual characters also increased on both broadcast TV and online streamed TV (such as Netflix or Amazon), with broadcast representations at 30 percent, up by 10 percentage points from last season.

The report also specifically notes that transgender characters (16) have more than doubled since last year (7).

Despite the success, gay activists say they will remain vigilant. “We must continue the push for more diverse and intricate portrayals of the LGBTQ community,” GLAAD president Sarah Kate Ellis wrote in a statement. “GLAAD will continue to work with Hollywood to … accelerate acceptance.”

The one criticism GLAAD had for the television industry, which has bent over backward to accommodate their demands, is that too many “queer women” characters have been dying on TV.

“Character after character died, continuing the harmful ‘bury your gays’ trope,” the gay watchdog organization grumbled. “It continues a decades-long trend of killing LGBTQ characters – often solely to further a straight, cisgender character's plotline – which sends a dangerous message to audiences that LGBTQ people are secondary and disposable.”

Formed in New York City in 1985 to pressure the New York Post regarding its “defamatory” AIDS coverage, the Gay and Lesbian Anti-Defamation League changed its name to the Gay and Lesbian Alliance Against Defamation after legal pressure from the Anti-Defamation League.  The organization was quickly successful when The New York Times changed its editorial policy to use the word “gay” exclusively to describe and refer to homosexuals.

The full GLAAD report card can be read here.