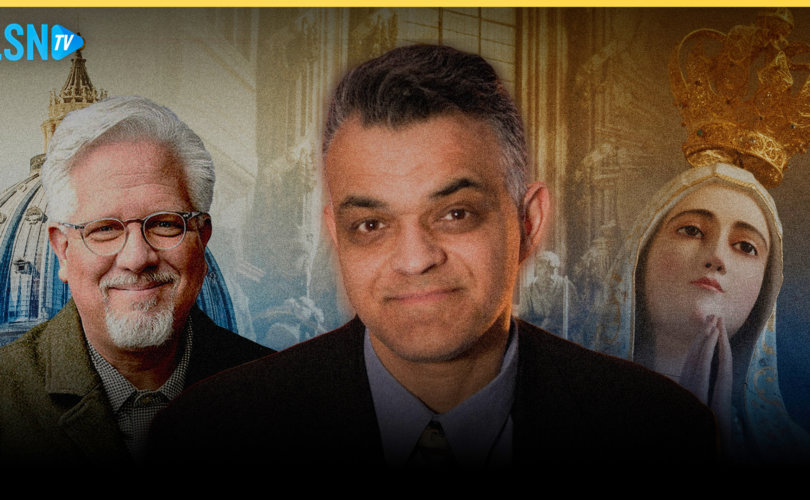 (LifeSiteNews) — Conservative political commentator Glen Beck interviewed LifeSite’s John-Henry Westen on the significance of the upcoming papal consecration of Russia and Ukraine to the Immaculate Heart of Mary and the visions of Our Lady of Fatima in 1917.

“We have seen a global revolution for over the last hundred years,” Westen began. “Heaven is very helpful in warning us of what’s going on. In 1917, there was the most stupendous public miracle in the history of the world, after the Resurrection and Ascension of Our Lord Jesus Christ into heaven. It was in October of 1917, October 13. You can go and look at the newspaper reports from all over Portugal.”

Recounting the way in which Our Lady had appeared in Fatima, Portugal to three shepherd children, Jacinta, Francisco, and Lucia, beginning on May 13, 1917, Westen explained that Mary had promised a miracle that October to confirm the apparitions and messages she had given the children. The Communist-leaning government in Portugal at the time, attempting to prove the whole thing a farce, actually encouraged the crowds and media to attend the apparition on October 13, intending to “show everybody that this is all nonsense.”

Noon came and it was pouring rain. All of a sudden, Westen related, “the sun begins to spin, gyrate on its axis, and then threw off various colors, and then it starts to dance in the sky, and then it comes hurtling toward the earth. There’s 70,000 people there and reporters photographing this. They think they’re all going to die. They honestly think it’s the end of the world. And then all of a sudden, just as fast it started — everything goes back to normal. The sun goes back to where it belongs. Everything is back to normal, except one thing is weird. Everything is dry, like there was no rain. So it is a stupendous miracle witnessed by 70,000 people and photographed.”

Explaining the visions of the children and the messages of Our Lady, Westen recounted the way in which Mary foretold the Second World War and said she would come to ask for the consecration of Russia to her Immaculate Heart in order to prevent it. In 1929, she did appear again to Lucia, then in the convent, asking that the Pope, in union with all the bishops of the world, consecrate Russia to her Immaculate Heart. Several popes have attempted to fulfill Our Lady’ request but have failed to carry it out in one aspect or another, either not mentioning Russia specifically or not involving all of the bishops of the world, Westen explained.

Speaking to the significance of consecrating Russia specifically, Westen said, “There are all sorts of talk about Russia being the instrument of chastisement of the world. In fact, Our Lady mentions that many nations would be removed from the face of the earth if the conversion of Russia were not obtained beforehand. And this is our big issue. Russia is obviously right now not only doing massive harm to Ukraine. They’ve also threatened nuclear war. This is a real possibility, although many people are sort of asleep to it.”

Westen went on to explain that in 1933 Our Lord appeared to Lucia to warn her that the world was following in the footsteps of the king of France and would suffer his same fate because Russia had not been consecrated to Mary’s Immaculate Heart. Jesus had asked for France to be consecrated to His own Sacred Heart. This was not done, and “a hundred years to the day after that request was made, and unfulfilled by the kings of France, the kings of France were removed. They were deposed and then later killed. So that hundred year timeline is very important because it’s coming up. 1929 is the hundred year timeline. So there’s a time component to this as well.”

Westen then spoke about the third secret of Fatima, and a vision in which the pope is “stepping over bodies in Rome, all sorts of religious and laity.” Going up a mountain to pray with priests, “he gets shot and killed.” Missing from the published account, however, is the explanation of the vision. Relating a similar vision that took place in Akita, Japan, Westen said, “Jesus appeared to a nun by the name of Agnes Sasagawa, and she says, ‘If men do not repent and better themselves, the Father will inflict a terrible punishment on all humanity. It will be a punishment greater than the deluge, such a one as never has been seen before. Fire will fall from the sky and will wipe out a great part of humanity, the good as well as the bad, sparing neither priests nor faithful. The survivors will find themselves so desolate that they will envy the dead.’”

Westen ended with a request that people call their bishops to consecrate Russia to the Immaculate Heart of Mary in union with the pope on March 25, and to pray the rosary daily as Our Lady asked at Fatima.