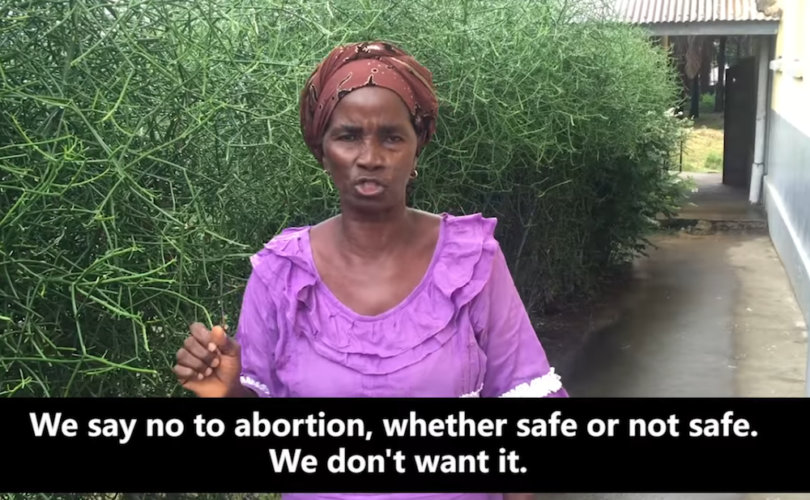 February 28, 2017 (LifeSiteNews) — A majority of Africans find abortion morally unacceptable and yet it is being foisted upon them as part of a “new colonialism” and a “dictatorship of the wealthy donor” in a massive Dutch-initiated global funding effort.

After U.S. President Donald Trump’s reinstated the Mexico City Policy, “many countries in the West, including Canada and the Netherlands, have decided to come together to raise funds,” says Obianuju Ekeocha, Nigerian-born founder of the UK-based Culture of Life Africa.

The Mexico City Policy denies U.S. funding to any organization that promotes or provides abortions in their international work, Ekeocha pointed out in a four-minute video released Tuesday.

Thirteen countries, including Canada, Finland, Luxembourg, Belgium and Sweden, have signed on to support the Dutch abortion initiative, according to a DutchNews.com article referenced in the video.

An international conference on the global abortion fund, called She Decides, will be held Thursday in Brussels. Participating countries and organizations are expected to announce then how much money they will be donating, DutchNews reported. Marie-Claude Bibeau, Canada’s Minister of International Development, is expected to attend.

“What is actually most disheartening is that these Western countries who are coming together to raise funds for the so-called safe abortion initiative have not even thought to ask the Africans what they want or how they feel,” she said.

A 2014 Pew Research global survey showed that “upwards of 80 percent of people who were questioned in the African countries found abortion morally unacceptable to them under any circumstance,” she said.

“There you have it: No to abortion in Africa.”

Ekeocha has heard the same thing firsthand in her travels throughout the continent.

The video, entitled The Dictatorship of the Wealthy Donor, includes moving clips of marches in Africa to defend the sanctity of human life, and of several African women emphatically stating: “No to abortion!”

Western governments that donate the “so-called safe abortion fund” are “ignoring the voices of the millions of people who are in Africa and who have said already that they do not accept abortion that they do not want abortion under any circumstance,” said Ekeocha.

Notably, the video displays an image of Bibeau gazing up at abortion extremist Prime Minister Justin Trudeau of Canada, as Ekeocha declares: “This is the new colonialism. This is cultural imperialism, this is the dictatorship of the wealthy donor.”

“Motherhood is a blessing, not a burden. Every child is a precious gift,” the video notes.

Added Ekeocha: “What we are looking for and asking for is your support for safe delivery of African babies.”

This was echoed by Sonnie Ekwowusi, a lawyer and founder of Nigeria’s Lagos-based Project for Human Development (PHD), who commended Trump for reinstating the Mexico City Policy.

“What has funding of abortion got to do with the urgent needs of the African women or Nigerian women? African and Nigerian women need food, employment and basic healthcare for survival, not abortion,” Ekwowusi told LifeSiteNews in an email.

“In villages after villages in Nigeria, women are looking for food to eat to stay alive,” he wrote.

So providing “foodstuffs” would be of “immense benefit” to Nigerians, as would funding means to contain the spread of diseases such as “malaria, typhoid, polio, high blood pressure, hypertension” which “have been killing many Nigerian women,” Ekwowusi noted.

The number of Nigerian women dying of cervical or breast cancer is increasing in Nigeria, he added. “Why not set up cancer screening centers across Nigeria? Why budget huge sums of money for abortion when you cannot provide ordinary drugs in our public hospitals, especially in our rural health centers and clinics in Nigeria?”

A doctor from the University of Nigeria Teaching Hospital (UNTH) in Enugu told him “that primary and secondary healthcare systems are virtually nonexistent in Nigeria,” Ekwowusi wrote.

Because of the “utter neglect” of community and basic rural medicine, “uncountable children from Enugu, Nsukka, Abakaliki and their environs die of preventable diseases before they are brought to UNTH,” he told LifeSiteNews.

In Africa, “the average citizen suffers from genteel poverty and illnesses,” Ekwowusi added.

“So, it is an absurdity, if not downright stupidity, to argue that the solution to the problems of African women is abortion.”