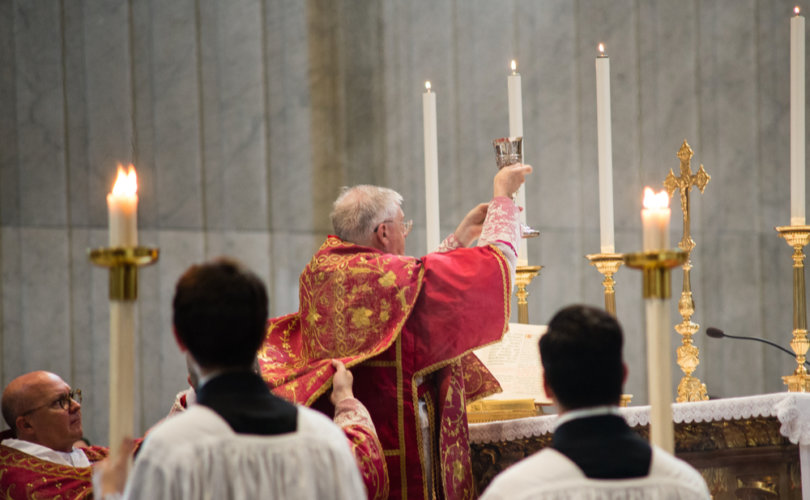 Pilgrimage on the occasion of the tenth anniversary of Summorum Pontificum, at Saint Peter's Chair, Rome, September 16, 2017.PIGAMA/Shutterstock

(LifeSiteNews) — The international group Una Voce, which promotes and defends the traditional liturgy of the Church, has urged Catholics devoted to the Latin Mass to make their voices heard in the current Synod on Synodality.

In a statement posted January 25, Una Voce International urged traditional Catholics to contribute to Pope Francis’ Synod on Synodality, so that “Catholics attached to the Traditional liturgy should not allow their voices to be forgotten.”

“Una Voce International calls on all our member associations and supporters all over the world to make brief and polite contributions before the deadline of Ash Wednesday: 2nd March 2022,” read the statement.

Please take a moment to contribute to the Synod on Synodality. Our voices may be ignored but we must do what we can to make them heard. Please spread the word. Multilingual guide here: https://t.co/eNVnmq2rSb pic.twitter.com/I3WkET31e0

Founded in 1967, in the tumultuous years of liturgical upheaval following Vatican II, Una Voce aims to “ensure that the traditional Roman rite of the Church is maintained in the Church as one of the forms of liturgical celebration, and to safeguard and promote the use of Latin, Gregorian chant and sacred polyphony and all the sacred, artistic, literary and musical traditions of the Roman Church in all their beauty and integrity.”

In order to do so, in the context of a Synod which will be based on listening to “people who have left the practice of the faith” and on “inter-religious dialogue,” Una Voce compiled resources in multiple languages, to assist Catholics responding to the Synod’s call for participation.

The documents are available in English, French, Italian, German, Spanish, Chinese, and Japanese.

While noting that contributions to previous Synods under Pope Francis were selected based on “their conformity to the agenda of synod organisers,” Una Voce still highlighted the importance of participation by faithful Catholics.

“A failure by Catholics attached to the Church’s ancient liturgy to make their views known would make our non-inclusion inevitable. Furthermore, views not included at later stages will at least have been viewed in earlier stages, and at a local level, perhaps by more open-minded individuals. Without placing any exaggerated hopes on the ultimate outcome, we should do what we can to ensure that our views are part of the mix.”

The Synodal process is currently at the local, or diocesan stage, where Catholics can take part in Synodal meetings which will subsequently guide the drafting of the working document or instrumentum laboris. This in turn will be discussed at seven continental meetings of bishops’ conferences, and the overall process will conclude with the October 2023 Synod of Bishops in Rome, when the bishops will assess a second version of the instrumentum laboris.

The deadline for Catholics to submit messages is Ash Wednesday, March 2, 2022.

Anyone should contribute and send messages to ‘each level’

Una Voce encouraged individuals, as well as groups, to make a contribution to the Synod, advising that the organization itself would be sending a submission.

The group also suggested that any submissions should be sent directly to the parish or diocese, but also to “each level,” even straight to Rome.

“What gets passed on from each level to the next will depend on the way people in the parish and diocese choose to summarise or collate responses: you should give them the chance to include yours, but also ensure that the next level up can see it even if it does not get passed on clearly,” Una Voce wrote.

The key question for Catholics submitting answers to the Synod is found in the Preparatory Document, and reads: “This Synod poses the following fundamental question: A synodal Church, in announcing the Gospel, ‘journeys together.’ How is this ‘journeying together’ happening today in your local Church? What steps does the Spirit invite us to take in order to grow in our ‘journeying together’?”

Una Voce advised that traditional Catholics should outline how they “value the older liturgy, and that it contributes to the Church (to unity, to the marginalised, etc.).” A suggested list of topics to cover is provided in the resource document.

The group also warned against giving the Synod organizers “an excuse to ignore it [the submission] by coming across as disloyal, angry, or extreme.”

Inclusion of anti-Catholic groups at expense of traditionalists?

While traditional Catholics fear being excluded from the “listening” process of the Synod on Synodality, the Vatican has been engulfed in controversy in recent weeks over its inclusion of anti-Catholic groups promoting LGBT ideology and the ordination of women on the Synod Resource website.

Also listed on the Synod’s resource site is the heretical group Association of US Catholic Priests. The Lepanto Institute reported on the group’s support of women’s ordination to the priesthood, it’s alliance with sexually deviant organizations and agendas, its work with an international network of heretical organizations, and its call for “priestless parishes.”

The pro-LGBT and historically condemned group New Ways Ministry is additionally listed on the Synod Resource site, after a controversy which saw the Vatican originally remove the link before putting it back up and apologizing.

New Ways Ministry claims it “educates and advocates for justice and equality for lesbian, gay, bisexual, transgender, and queer (LGBTQ) Catholics, and reconciliation within the larger church and civil communities.” Its co-founder, Sr. Jeannine Gramick, whose anti-Catholic pro-LGBT work has been historically condemned by the Church, was recently praised by Pope Francis.

Two years before Gramick was silenced by then-Cardinal Joseph Ratzinger in 1999, the prelate praised Una Voce for its “important role in supporting the use of the 1962 edition of the Roman Missal in obedience to the directives of the Holy See. For this valuable service I express my gratitude to the members of the Federation and extend my blessing.” Despite this previous condemnation, New Way’s Ministry appears on the Synod site along with Una Voce.