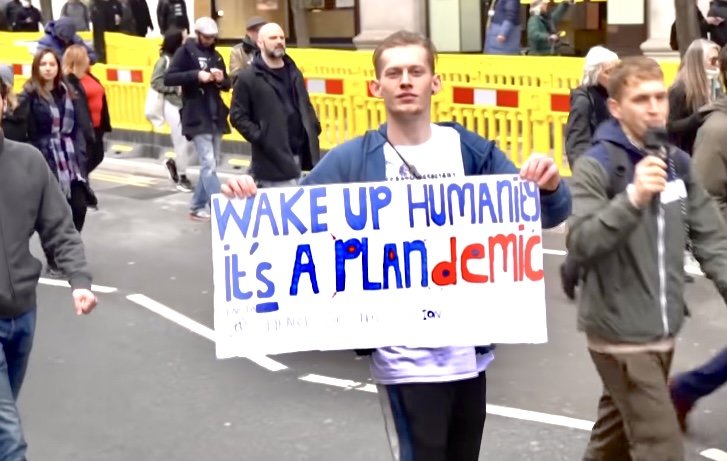 Protesters took the the streets of London in July to rally against COVID-19 restrictions.YouTube

July 26, 2021 (LifeSiteNews) – Protesters fed up with COVID-19 restrictions and looming vaccine passport schemes took to the streets across Europe and Australia in a wave of global protests on Saturday.

Hundreds of thousands of people marched across France for the second weekend in a row, protesting mandatory vaccination for healthcare workers and the introduction of a so-called “health pass” program. Demonstrators in Paris on Saturday could be heard shouting “Liberté” and carried banners with the words “Big pharma shackles freedom” and “Stop the dictatorship!”

Incredible fast-motion footage capturing the hundreds of thousands who took to the streets in Paris this past weekend to protest Macron's edict for digital health pass checks at all shops, restaurants, and transportation.pic.twitter.com/01T5fu6kzo

Police used water cannons and tear gas to break up the massive crowds, including on the Champs-Élysées, where officers at one point fled from groups of unarmed, primarily young protesters.

Aerial footage of the scale of the protests that have swept France this week in response to Macron's proposal for a health pass checks at all shops, restaurants, and transportation. This from Marseilles, a medium-sized city in Southern France.pic.twitter.com/C1T84up1jY

In Chambéry and Poiters, citizens stormed town halls, tearing down portraits of President Emmanuel Macron, and protesters allegedly burned a vaccine center in the southwestern municipality of Urrugne.

French authorities have said that the full number of protesters in the country on Saturday was roughly 160,000. Florian Phillippot, president of the conservative Patriots Party, slammed the Macron government for “making fun of the French.”

France’s new “health pass” law, introduced by Macron two weeks ago and approved by parliament on Monday, mandates proof of COVID-19 vaccination, negative test results, or recent recovery to enter public venues like restaurants and museums, or to travel. The program will launch at the beginning of August.

Tens of thousands of protesters likewise turned out across Australia on Saturday, including in Sydney, which has been under strict lockdown for more than a month.

Australians in Greater Sydney are currently barred from leaving home except to buy food, to seek medical assistance, for an “essential,” in-person job, or to exercise with no more than one other person. Browsing in stores is banned, as are weddings, though there have been a mere 10 COVID-19 deaths in Sydney during the “current outbreak,” according to the Guardian.

Protesters enraged by the arbitrary, draconian lockdowns chanted “We want freedom,” echoing recent Cuban protests, and held signs reading “The lockdown is killing us, not COVID-19” and “I believe in Jesus not the vaccine.”

Around 3,500 people participated in the Sydney demonstrations, New South Wales (NSW) police said. Law enforcement have charged 63 individuals and made 35 arrests, ABC Australia reported, and vowed a harsh response to further largely peaceful protests in the near future.

“Yesterday cannot happen again,” NSW police minister David Elliot said. “The deployments we saw yesterday are just a fraction of what are available.” NSW police have announced a “strike force” to identify demonstrators and have received more than 10,000 tip-offs about protesters since Saturday, police commissioner Mick Fuller likewise said.

Thousands also rallied against COVID-19 restrictions in Melbourne, which is enduring a fifth stay-at-home order, the Associated Press reported. “This is not about a virus, it’s about total government control of the people,” one banner read.

ABC Australia noted that police in Melbourne have processed dozens of protesters for not heeding a ban on travel beyond a five-kilometer radius from one’s home. Authorities cited other protesters for not wearing masks and for refusing to give their names and addresses. Brisbane, which is no longer under lockdown, saw 7,500 mostly mask-less protesters as well, ABC said.

The lockdowns in Melbourne and Sydney, justified by a handful of alleged COVID-19 deaths, have been estimated to cost Australia $2 billion per week and have come with a costly mental health toll, particularly for young people.

Demonstrators similarly gathered in Rome, Naples, Milan, and Turin against a newly-approved “Green Pass” certificate program in Italy. As in France, a certificate of vaccination, negative COVID-19 test results, or recent recovery from the virus will be required for entry to public venues from sports stadiums to cinemas starting early August.

Thousands of protesters in Turin shouted “No Green Pass” in a video published on social media while Italian police appeared to remove their helmets and join another rally.

This is how the Police could do it. Italian Police removed their helmets and walked with the people. pic.twitter.com/3W7xJVtryp

British protesters converged on London for yet another massive march this weekend, packing the city on Saturday in what was dubbed a “Freedom Rally.” Protesters demanded an end to coercive vaccination and testing, following Prime Minister Boris Johnson’s announcement last Monday that anyone seeking a full return to public life will need proof of COVID-19 vaccination.

Marchers also took to the streets in Manchester, where some attempted to storm a COVID-19 testing center. Britain’s notoriously strict coronavirus, months-long public health measures were lifted last week, soon after a protest that drew hundreds of thousands of people to London.

Other rallies have been reported in both Ireland and Northern Ireland, as well as in Greece, Spain, Finland, Slovakia, Netherlands, Japan, South Africa, and the French island of Réunion.