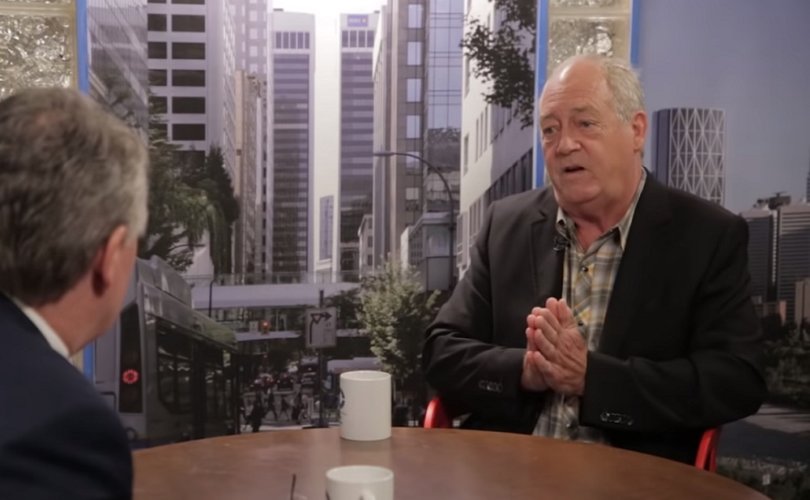 Patrick Moore, co-founder of Greenpeace, discusses global warming on a 2018 episode of "Conversations that Matter."Vancouver Sun via YouTube.

March 11, 2019 (LifeSiteNews) — Conservatives have long argued that anthropogenic global warming (AGW) is a politically motivated distortion of climate science. Now that argument is being bolstered by an unexpected source: the co-founder of the leading environmental organization Greenpeace.

Patrick Moore, who is also a former president of Greenpeace Canada, appeared on SiriusXM’s Breitbart News Tonight last week for an interview with Rebecca Mansour and Joel Pollak.

“Fear has been used all through history to gain control of people’s minds and wallets and all else, and the climate catastrophe is strictly a fear campaign,” he said, adding that proponents of AGW — the view that human activity rather than natural phenomena is primarily responsible for Earth’s changing climate — is also fueled by “guilt” that “you’re killing your children because you’re driving them in your SUV and emitting carbon dioxide into the atmosphere.”

Moore argued that on top of “the green movement creating stories that instill fear in the public” and the “media echo chamber … repeating it over and over and over again to everybody,” the narrative is bolstered by “green politicians who are buying scientists with government money to produce fear for them in the form of scientific-looking materials” and “the green businesses, the rent-seekers, and the crony capitalists who are taking advantage of massive subsidies, huge tax write-offs, and government mandates requiring their technologies to make a fortune on this.

“And then, of course, you’ve got the scientists who are willingly, they’re basically hooked on government grants,” he continued. “Most of the scientists — put it in quotes, ‘scientists’ — who are pushing this catastrophic theory are getting paid by public money[.] … [M]ost of what these so-called scientists are doing is simply producing more fear so that politicians can use it to control people’s minds and get their votes because some of the people are convinced, ‘Oh, this politician can save my kid from certain doom.’”

AGW proponents suffered a blow in 2010 with the discovery that their leading researchers, such as East Anglia University’s Climate Research Unit and the Intergovernmental Panel on Climate Change, had engaged in widespread data manipulation, flawed climate models, misrepresentation of sources, and suppression of dissenting findings.

Left-wing activists continue to claim there is a “97% scientific consensus” in favor of AGW, but that number is a misrepresentation of an overview of 11,944 papers from peer-reviewed journals. Sixty-six point four percent expressed no opinion on the matter; the 97% number refers only to the minority who did, and even that is disputed. The authors of the overview emailed the papers’ 29,083 authors, only 4% of whom responded at all. Many of the authors identified as endorsing the “consensus” later spoke out to say the overview had misrepresented their position.

“It is the biggest lie since people thought the Earth was at the center of the universe. This is Galileo-type stuff,” Moore went on. “If you remember, Galileo discovered that the sun was at the center of the solar system and the Earth revolved around it. He was sentenced to death by the Catholic Church, and only because he recanted was he allowed to live in house arrest for the rest of his life.”

Moore’s retelling of the Galileo story reflects a prevalent myth rather than the historical facts. The point, per Moore, is the disconnect between AGW proponents’ conduct and their self-image as champions of scientific inquiry.

“This abomination that is occurring today in the climate issue is the biggest threat to the Enlightenment that has occurred since Galileo,” he declared. “Nothing else comes close to it. This is as bad a thing that has happened to science in the history of science. It’s taking over science with superstition and a kind of toxic combination of religion and political ideology. There is no truth to this. It is a complete hoax and scam.”