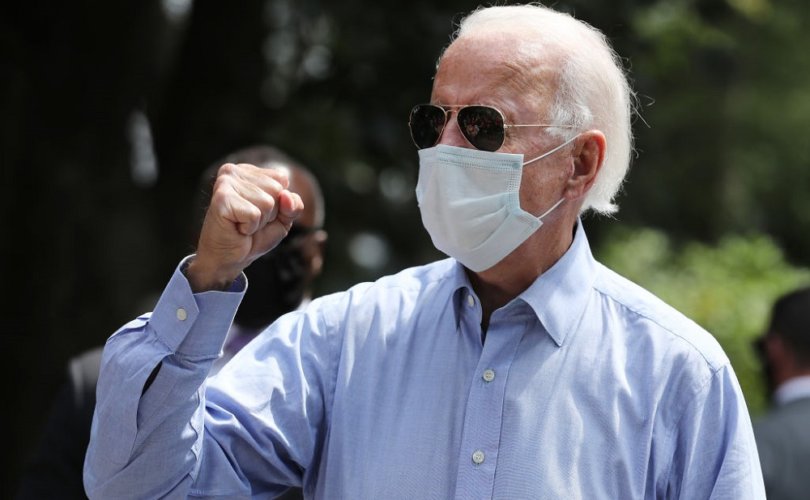 September 10, 2020 (LifeSiteNews) — Conservative critics are accusing The Washington Post of threatening voters with violence after the newspaper published an article last week suggesting that only a landslide win for Joe Biden in November’s presidential election will lead to peace on America’s streets.

The Post, which is owned by Amazon CEO Jeff Bezos, published an opinion piece last week by Rosa Brooks, a law professor at Georgetown University, in which she detailed the results of a “war games” exercise she helped to organize through the “Transition Integrity Project” group, in which a number of actors explored a variety of different election outcomes.

“A landslide for Joe Biden resulted in a relatively orderly transfer of power. Every other scenario we looked at involved street-level violence and political crisis,” Brooks wrote.

Brooks, who previously worked as special counsel to the president at George Soros’s Open Society Institute in New York and who is currently on the advisory board of the Open Society Foundations’ U.S. Programs, made no attempt to disguise the bias of those involved in the imaginary role-playing games, explaining that in each of the hypothetical scenarios, Trump and his supporters acted to provoke and increase violence, while Biden and his team encouraged peace and calm.

“In each scenario, Team Trump — the players assigned to simulate the Trump campaign and its elected and appointed allies — was ruthless and unconstrained right out of the gate, and Team Biden struggled to get out of reaction mode. In one exercise, for instance, Team Trump’s repeated allegations of fraudulent mail-in ballots led National Guard troop to destroy thousands of ballots in Democratic-leaning ZIP codes, to applause on social media from Trump supporters,” she writes.

“Over and over, Team Biden urged calm, national unity and a fair vote count, while Team Trump issued barely disguised calls for violence and intimidation against ballot-counting officials and Biden electors.”

Conservative talk radio host Rush Limbaugh said the purpose of the Brooks article was to “frighten” and “threaten” Americans “into voting against Trump.”

“They’re just coming right out and telling you now that if Biden does not win, and in a landslide, meaning it better be doubtless, it better be no question about it, if Biden doesn’t win in a landslide, then your country is going to be violent, violent, violent 24/7. And they published this at the Washington Post, which means they stand behind it,” Limbaugh said in response to the article.

The Washington Post article is consistent with Biden’s own recent efforts to blame the violence in Democrat-run states around the country on President Trump, while suggesting that a Trump victory will lead to more violence.

In a speech given last Monday Biden accused Trump of “stroking [sic] violence” and called him a “toxic presence” before asking: ‘Does anyone believe there will be less violence in America if Donald Trump is re-elected?”

Meanwhile, Biden and other Democrats have refused to condemn the violence by Black Lives Matter and Antifa activists in so-called “protests” around the country. In June, Biden’s running mate, vice presidential candidate Senator Kamala Harris, told talk show host Stephen Colbert that the “protests” will not stop.

In addition to her links with the globalist Open Society Foundation, “war games” organizer Brooks has a number of significant political connections. A recent report in The National Pulse detailed evidence from Federal Election Commission (FEC) records showing that between February 2019 and February 2020, Brooks has donated more than $5,000 to Biden’s campaign. Brooks is also a Senior Fellow at the New America Foundation, which has received significant funding from the Bill and Melinda Gates Foundation and Google.

As part of the “war games” exercise, during the “game” in which Trump wins the presidency, the actor playing Biden refused to concede defeat, leading to “1) Political chaos; 2) Widespread threats of violence, and sporadic actual violence in the streets; and 4) [sic] A hostile, dangerous, highly-partisan, and frequently unconstrained information and media environment.”

Major political unrest ensues with California, Oregon, and Washington potentially seceding from the United States. The report finally details that in January, the House of Representatives awards Biden the presidency, while the Senate continues to recognize Trump. “[W]ithout a single president-elect entitled to be Commander-in-Chief” it is “unclear what the military would do in this situation.”

According to coverage of the event by The New York Times, it was Podesta who played the role of Biden during the game in which Trump won the election. The Times claims that Podesta’s actions “shocked the organizers.”

In June, Biden told Trevor Noah of Comedy Central’s The Daily Show that he believes that Trump will try to “steal the election” but that the military will remove him from the White House.

“I promise you,” Biden said, “I am absolutely convinced they will escort him from the White House with great dispatch.”

“I think this is going to drag out and eventually I do believe he will win, if we don’t give an inch,” Clinton said.

Hillary Clinton has some advice for Joe Biden: Don’t concede in a close race.

The 2016 nominee sits down with @jmpalmieri and @sho_thecircus to urge Dems to pay close attention to GOP strategy. pic.twitter.com/REwfLf1QjS