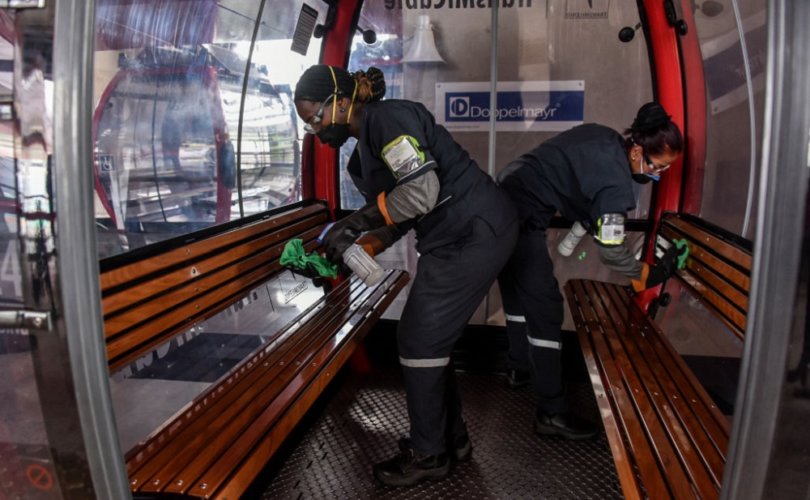 March 12, 2020 (LifeSiteNews) — As concern around the world increases about the global coronavirus outbreak, news has surfaced about an event co-hosted by the Bill & Melinda Gates Foundation in October 2019, in which 15 global business, government, and public health leaders took part in a simulation exercise based on responding to an international “coronavirus” pandemic.

The first report of the 2019 novel coronavirus (COVID-19) currently spreading around the world occurred in November 2019.

The term “coronavirus” refers to a group of viruses rather than one unique strain, and the coronavirus discussed during October’s Event 201 simulation exercise differed in a number of ways from the Covid-19 virus.

In the Event 201 simulation, the coronavirus disease starts in pig farms in Brazil and is transferred to humans, with a resulting death toll of 65 million people within 18 months — surpassing the deadliest pandemic in history, the 1918 Spanish flu.

Increased recent interest in the event is understandable, not least because one of the purposes of the event was to help international policymakers in their understanding of the challenges they could face if such a pandemic actually developed.

Among the seven recommendations made by the group of global leaders was that “[g]overnments and the private sector should assign a greater priority to developing methods to combat mis- and disinformation prior to the next pandemic response.”

The discussions on combatting misinformation are available to view on the Event 201 website. Notable among them are the comments from Professor George F. Gao. He is the director-general of the Chinese Center for Disease Control and Prevention. Gao said, in the context of the simulation, that “we have more cases in China, those are death cases reported, and also my staff told me that there is misinformation and there are some people who believe this is man-made, some pharmaceutical company made the virus, so there are some violations and even deaths because of this misinformation.”

Timothy Evans, director and associate dean of the School of Population and Global Health at McGill University in Montreal, spoke of the need to involve global institutions such as the U.N. and the World Health Organization to combat any misinformation coming from national governments, although he noted that when such institutions challenge governments directly, “they often get into this issue of sovereignty.” Evans spoke of the need for “soft” and “stealth” power influences such as religious leaders, business leaders, and influential people capable of contacting heads of state directly.

Mr. Lavan Thiru, of the Monetary Authority in Singapore, said there may be a need for governments to step up their “enforcement actions” on fake news.

“Maybe this is a time for us to showcase some cases where we are able to bring forward some bad actors and leave it for the courts to decide whether they have actually spread some fake news,” Thiru said.

In their official recommendations statement, the group said governments and social media companies will need to partner in order to counter “misinformation.”

“This will require developing the ability to flood media with fast, accurate, and consistent information,” their statement reads.

The statement also argues that “media companies should commit to ensuring that authoritative messages are prioritized and that false messages are suppressed through the use of technology.”

It appears that such policies are now in place during the ongoing COVID-19 outbreak.

A New York Post article by biologist and China expert Steve Mosher that argued that COVID-19 may have leaked from a Chinese lab has been blocked by Facebook, with the social media giant stating that it was “false information.”

“At an emergency meeting in Beijing held last Friday, Chinese leader Xi Jinping spoke about the need to contain the coronavirus and set up a system to prevent similar epidemics in the future,” Mosher wrote on February 22.

Mosher revealed that China’s only microbiology lab that can handle the novel coronavirus is the Wuhan Institute of Virology’s National Biosafety Laboratory.

After being posted on social media, the article went viral and led to Mosher appearing on Tucker Carlson and other shows. It got over 13 million views and 100,000 shares before it was blocked by Facebook.

Mosher says the reason why some people are so angry about his article is because by putting the blame for the epidemic on the Chinese Communist Party, he is negating the opportunity for the Left to use the situation to attack U.S. president Donald Trump.

Facebook, as well as other Big Tech companies, appears to be increasing efforts to influence what information about the virus is publicized on social media platforms. Last week, Facebook CEO Mark Zuckerberg said the group was “removing false claims and conspiracy theories [related to COVID-19] that have been flagged by leading global health organizations.”

Meanwhile, Twitter has placed a warning label that links to the Centers for Disease Control and Prevention (CDC) when users search for “coronavirus.”

Yesterday evening, representatives from major technology companies — including Amazon, Google, and Facebook — met with officials at Downing Street, the residence of U.K. prime minister Boris Johnson, to discuss how they can help make sure the public gets the most accurate and up-to-date information on coronavirus. A government statement said that the “scope and impact of disinformation linked to coronavirus was also discussed, and how we can all play a role in tackling this.”

March 13, 2020 correction: An earlier version of this report stated that Event 201 was in November, whereas it was in October.